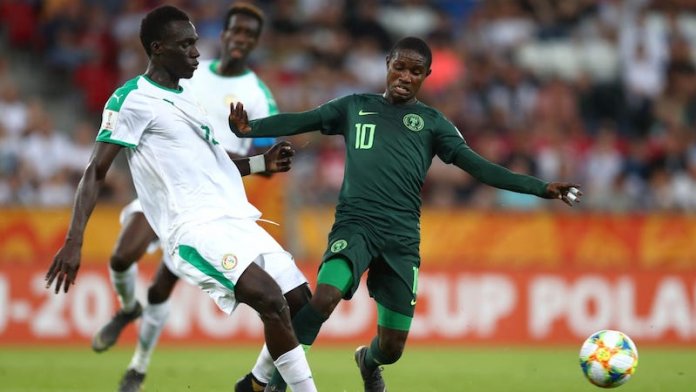 Flying Eagles of Nigeria lost 2-1 to Senegal Monday evening at the Lodz Stadium to end their campaign in the second round stage of the FIFA U-20 World Cup Poland 2019.

Junior Teranga Lions’ forward Amadou Sagna broke the deadlock in the 36th minute with a low, right-footed effort while Ibrahima Niane made it double lead for the Senegalese late in first-half stoppage time.

Sadly, Flying Eagles who played uncharacteristic brand of football not associated with any of Nigeria’s previous team continued their wastefulness in the clash with the Senegalese.

They had similar opportunity that Sagna utilized for Senegal’s first goal but Flying Eagles Collins Sor failed to take the chance for Nigeria through sloppy and uncoordinated play in front of goal.

Eagles appeared to have been fired up by pep talk during the half time break as they had a superb start to the second half, scoring five minutes after the whistle. From a free kick just outside the penalty area, Success Makanjoula sent his cross left of the wall and found the boot of Aniekeme Okon, who flicked in the easy goal.

Thereafter, the Paul Aigbogun tutored lads returned to their wasteful game of not been able to finish build up into the Senegalese box. All attempts to get the equaliser and drag the game into extra time failed as the junior Teranga Lions held their nerve till the final whistle. Senegal willed their way to victory and a spot in the quarter-final against either Korea or Japan

Earlier, Ukraine qualified for the quarter-finals for the first time in their history following a 4-1 victory over Panama at Tychy Stadium.

While both sides sought to find their footing for the first 20 minutes of the match, the Ukrainians emphatically took control by half-time.

Danylo Sikan and Yukhym Konoplia combined down the right side twice to lethal effect, as Konoplia served up one-touch finishes for Sikan in the 23rd minute and the first minute of first-half stoppage time. Sandwiched in between those goals was a 41st-minute headed goal from Denys Popov, his third of the tournament, and Ukraine went into the locker room with a commanding 3-0 lead.

Los Canaleros reeled one back five minutes into the second half. Ernesto Walker exhibited strength and control using his chest to settle a deep cross and finish from close range.

Serhii Buletsa shut the door on Panama seven minutes from full time, however, slipping unnoticed into the penalty area and beating Panama goalkeeper Emerson Dimas to cement Ukraine’s position in the last eight.

Panama exit Poland 2019 with their best-ever finish as one of the final 16 teams.