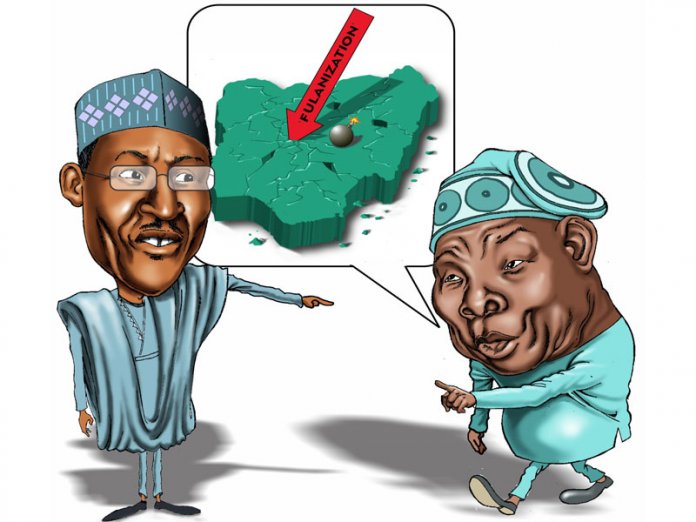 The recent charge by former President Olusegun Obasanjo about the security situation in the country might have played into the hands of those who stigmatise others with sweeping generalisations. With some opposition groups blaming the general insecurity in the country on ‘Fulani herdsmen’ and issuing ultimatums that could engender reprisal actions and set the country ablaze, we need to quickly re-position this debate. Profiling on the basis of religion or ethnicity not only hurts the society, when a whole group is treated with suspicion, innocent people become targets and that only helps the real criminals.

Although Obasanjo’s thesis was specific to the Boko Haram insurgency which has “incubated and developed beyond what Nigeria can handle alone”, it is his coinage of the word ‘Fulanisation’ that has been weaponised by some politicians to score some cheap points. “It is no longer an issue of lack of education and lack of employment for our youths in Nigeria which it began as, it is now West African Fulanisation, African Islamisation and global organised crimes of human trafficking, money laundering, drug trafficking, gun trafficking, illegal mining and regime change”, Obasanjo said in a keynote address at the 2019 Synod of the Church of Nigeria (Anglican Communion) in Oleh, Delta State.

A few admissions are in order here. It is true that majority of the roving cattle herdsmen in Nigeria happen to be of Fulani extraction. It is also true that till lately, they have remained harmless and law abiding, only constituting a public nuisance with the uncontrolled movements of their herds around the country. It is equally incontrovertible that in the last four years or so, some of these herdsmen have acquired military grade weapons with which they rob, kidnap, maim and kill. However, those who commit these atrocities do so not because they are Fulanis but rather because they are criminals. These errant herdsmen, like their counterparts in other parts of the country, have just discovered the attraction of material things and access to easy wealth through armed criminality. They have also felt the surge of power that can come from the possession of sophisticated weapons.

We must locate the challenge of the current insecurity in the epidemic of armed criminal gangs and rackets that have been allowed to roam free and overwhelm the populace. There is a blatant failure of crime fighting, crime intelligence and overall internal security strategy. Meanwhile, there is no ethnic group in Nigeria that has a monopoly of these crimes. To therefore isolate criminals who are Fulani from other criminals terrorising the country (who may be Hausa, Ijaw, Yoruba, Igbo or from any of the other ethnic nationalities in Nigeria) is mischievous politics. It is also counterproductive at a time we should be calling on government, at all levels, to rise to the challenge of general insecurity.

At a period when respected political and religious leaders who ordinarily should preach peace seem to have thrown both caution and public decency to the wind, there is an urgent need to remind critical stakeholders that there is a correlation between unguarded utterances and the ethno-religious violence. Ancient suspicionshave suddenly resurfaced. Long held prejudices that we are gradually transcending are threatening to step in again. If this is allowed to continue, no one can tell the quantum of damage it would have on our fragile unity. This has to be a source of concern to all men and women of goodwill.

However, it ought to particularly worry President Buhari, himself a Fulani rancher, that roving herdsmen have become almost out of control under his watch. It is this fact and some curious decisions like the proposition to establish a ‘Fulani Radio’ by the federal government that encourage the unfortunate rhetoric of ‘Fulanisation’ and its attendant politics of bad manners. But dire as our internal security challenges may be, we must avoid ethnic and religious profiling because of the consequences to our peaceful co-existence as a nation.

Quote
Dire as our internal security challenges may be, we must avoid ethnic and religious profiling because of the consequences to our peaceful co-existence as a nation