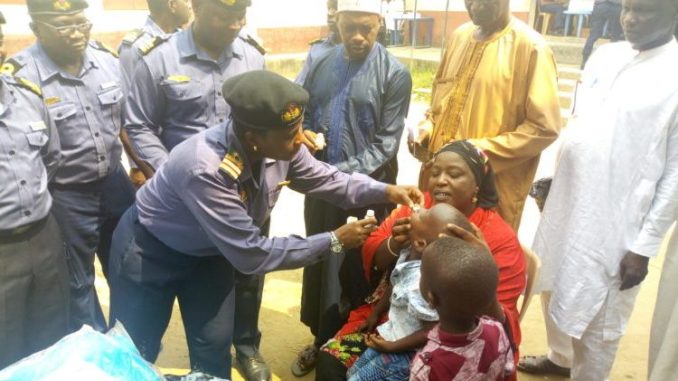 The Nigerian Navy has visited orphanages and houses for the physically challenged in Yenagoa, Bayelsa State, as part of its community relations activities marking its 63rd year of establishment. A large team of medics which accompanied the leadership of the naval operations which covers Bayelsa, Delta, Kogi, Anambra and others, also treated the children of common ailments. The Flag Officer Commanding, Central Naval Command, Rear Admiral Saidu Garba, who led the team, also donated medical  and household items to the hospices, including the Daisy home for orphanages and physically challenged children as well as the Gloryland orphanage. Garba, who was represented by Rear Admiral Solomon Agada, Chief Staff Officer, at the CNC, Yenagoa, said the Navy was inspired to give back to the society as part of its efforts to go beyond handling of deadly weapons to winning the hearts of people living in its Areas of Responsibility (AoB).

“This is part of our activities marking the navy week as approved by the Chief of Naval Staff, Vice Admiral Ibot-Ete Ibas, to foster closer relationships within the areas where we operate among the civil society for them to provide free medical services. This is the first time we are taking the service to the orphanages because we realise that the children are the future of our nation. And we know they require medical attention just like you see us doing. As an arm of the armed forces, our activities are mainly in operations, so we are going beyond just our kinetic activities and we want to touch their minds and hearts so they know that we are part of them and that we are their brothers and sisters” he said.