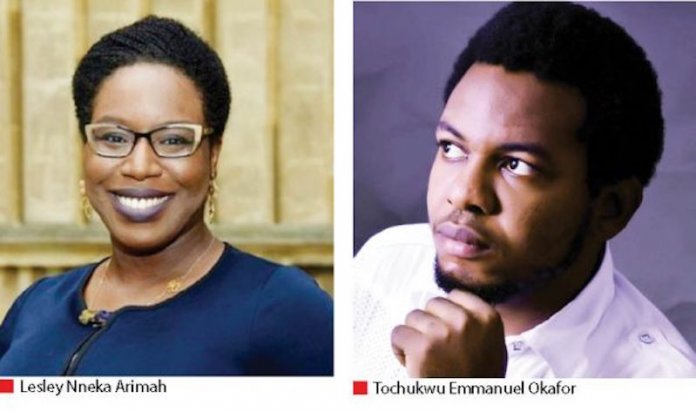 Two Nigerians featured in the 2019 Caine Prize for African Writing shortlist, which was announced by the organisers on Monday. The two Nigerians – Lesley Nneka Arimah and Tochukwu Emmanuel Okafor – are in the good company of other authors from Ethiopia, Kenya and Cameroon.

According to the chair of the judges for this year, Kenyan author Dr Peter Kimani, the writers in the shortlist “carry on with that tradition, not just in their inventiveness in imagining the world, but also in tackling the ordinary in an extraordinary manner, in a wide-range of issues: gender and generation; home and exile; sexuality and religion; love and hate; happiness and heartbreak.”

The author of the award-winning novel, Dance of the Jakaranda, had earlier described this year as “a special year for the Caine Prize for African Writing, as it marks its 20th anniversary”, adding: “It’s a milestone that affords for both a reflection on the past, and a projection into the future.”
Besides the winner, who carts away the £10,000 prize, each shortlisted writer will also receive £500. Also, the shortlisted stories will be printed by New Internationalist in a special publication to mark the 20th Caine Prize award dinner, and through co-publishers in 16 African countries who receive a print-ready PDF free of charge.

The full shortlist for the Prize as announced on Monday was follows:
• Lesley Nneka Arimah (Nigeria) for ‘Skinned’, published in McSweeney’s Quarterly Concern, Issue 53 (2018).
• Meron Hadero (Ethiopia) for ‘The Wall’, published in McSweeney’s Quarterly Concern, Issue 52 (2018).
• Cherrie Kandie (Kenya) for ‘Sew My Mouth’, published in ID Identity: New Short Fiction From Africa (2018).
• Ngwah-Mbo Nana Nkweti (Cameroon) for ‘It Takes A Village Some Say’, published in The Baffler (2017).
• Tochukwu Emmanuel Okafor (Nigeria) for ‘All Our Lives’, published in ID Identity: New Short Fiction From Africa (2018).
Also on the 2019 judging panel are Sefi Atta, Nigerian author and playwright shortlisted for the 2006 Caine Prize; Margie Orford, acclaimed author hailed as the “queen of South African crime-thriller writers”; Scott Taylor, professor, and director of the African Studies Program at Georgetown University; and Olufemi Terry, Sierra Leone-born author and winner of the 2010 Caine Prize. The winner of this year’s £10,000 prize will be announced at an award ceremony and dinner in the Beveridge Hall at Senate House, SOAS, on Monday, July 8 July – in partnership with SOAS, University of London.

The annual prize – named after the late Sir Michael Caine, former Chairman of Booker plc and Chairman of the Booker Prize management committee for nearly 25 years – is awarded annually for a short story by an African writer published in English (between 3,000 and 10,000 words).
To the organisers, an African writer is someone who was born in Africa, or who is a national of an African country, or who has a parent who is African by birth or nationality.

The Prize’s patrons are the African winners of the Nobel Prize for Literature, Wole Soyinka and J M Coetzee. Meanwhile, Baroness Nicholson of Winterbourne is President of the Council, Ben Okri OBE is Vice President, Ellah Wakatama Allfrey OBE is the Chairperson, Adam Freudenheim is Deputy Chairperson, and Dele Fatunla is the Administrator of the Prize.