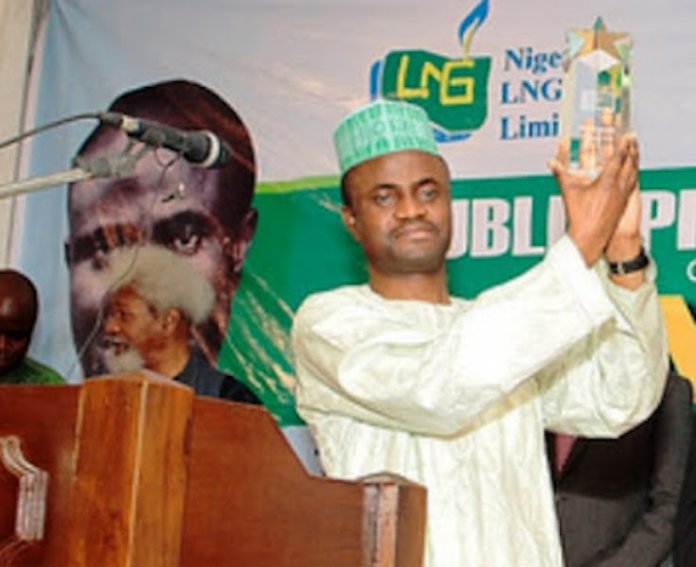 The local literary scene stirs to life, thanks to the annual Nigeria Literature Prize, endowed by the Nigeria LNG which was incorporated 30 years ago. Having thrice increased its cash value, the annual prize has kept the creative mills turning. Okechukwu Uwaezuoke reports

Things started to look up for the local literati in 2004. For that was the year the Nigeria Prize for Literature stomped into the scene, promising a winner-takes-all cash prize worth $20,000. Such a cash prize for literary endeavours was hitherto unheard of in this talent-glutted scene. Literary hopefuls swarmed around this prospect, intent on getting their slice of this largesse.

Before then, the Association of Nigerian Authors – more popularly known by its acronym ANA – had been plodding on with its assortment of sponsored modestly-valued annual category prizes and had that year awarded the following eight prizes: ANA/Atiku Abubakar Prize for Children Literature, ANA/NDDC Drama Prize (In honour of J. P. Clark), ANA/NDDC Prize (In honour of Gabriel Okara), ANA/NDDC Prose Prize (In memory of Ken Saro-Wiwa), ANA/Spectrum Prize, ANA/Cadbury Prize, ANA/NDDC Flora Nwapa Prize for Women Writing and ANA Literary Journalist, 2004.

Apparently because the ANA literary prizes award categories – albeit known for its cash prizes that could go as low as N50,000 and manage to go as high as $2,500 – were open to both young and old Nigerian writers at home and abroad, the Nigeria LNG -endowed Nigeria Prize for Literature stirred the hornet’s nest of controversy when it restricted its $20,000 prize to locally-based Nigerian writers. Consequently, poisonous arrow darts of criticism from the vociferous Nigerian writers in the diaspora whizzed furiously at the prize. “Ghetto Prize,” some of these writers even derisively called it.
Undaunted, the Nigeria LNG – then in its 15th year of existence – had stuck to its guns. The locally-based Nigerian writers, it had reasoned, were making strenuous efforts to produce creative masterpieces and hence deserved to be reasonably encouraged.

No sooner had the organisers shrugged off the criticisms than they courted further controversies through the non-award of the prize in its inaugural year. The prize – designed to annually rotate among the four literary genres of prose fiction, poetry, drama and children’s literature – found none of the three shortlisted entries worthy of it. That this bruised the writers’ ego was evident in the fact some of the scoffers even went further to allege that the Nigeria LNG had no plans to award the prize in the first place.

Yet, award the prize, the Nigeria LNG did the following year. This was even if it meant two winners sharing the much-coveted $20,000. That year, the now-deceased Gabriel Okara with his poetry collection The Dreamer: His Vision shared the booty with his acolyte, the late Ezenwa Ohaeto, whose entry was Chants of Minstrel.
The first time the prize would be won by one person turned out to be in 2006, two years after it was inaugurated. This was when Ahmed Yerima with his play Hard Ground was adjudged the overall winner. By this time, the cash value had been upped to $30,000. This gesture seemed to have finally laid the ghost of the no-winner to rest, for Yerima did not have to share the prize with anyone.

Thus, the prize gradually began to earn the trust of the local literati. Not even the sharing again of the prize in 2007 – this time between the two female literary titans Mabel Segun for her Readers’ Theatre: Twelve Plays for Young People and Akachi Adimora-Ezeigbo for My Cousin Sammy – could shake the literati’s confidence. There was no doubt: the literary prize had come to stay.

This fact was corroborated in 2008, when the cash value of the prize was upped again to $50,000 as the award rotation returned once more to prose fiction. Just like in 2006, the prize produced yet again an overall winner: Kaine Agary, whose entry Yellow Yellow was adjudged the best.
Even so, the restive tongues of the cynics would find other reasons to wag in 2009. This was the year that the painful memories of the no-winner year, 2004, were dredged up. None of the arguably Nigeria’s best poets, who had stepped forward for the prize, were deemed worthy of it.

This naturally hurt the prize’s approval rating among the literati but not enough to raise doubts about its integrity.
But, thanks to a deft move by the organisers, the prize began to earn the trust of the Nigerian writers in the diaspora, to whom the door was open for the first time in 2010. Thus, the renowned Nigerian playwright in the diaspora, Esiaba Irobi, became the prize’s first-ever posthumous winner with his play, The Cemetery Road.
Then, the following year, when the spotlight shifted to children’s literature, the prize’s value was increased to its present value of $100,000. That year, Adeleke Adeyemi – a. k. a. Mai Nasara – won the prize with his entry, The Missing Clock.

The diaspora writers consolidated their gains in 2012 when Belgium-based Chika Unigwe emerged the overall winner with her entry On Black Sisters’ Street. Still, after two winners – Tade Ipadeola in 2013 for his poetry collection, The Sahara Testaments, and Sam Ukala for his play, The Iredi War – the no-winner spectre returned in 2015 when it was the turn of the children’s literature genre. This was because none of the entries were deemed suitable for children and were adjudged below standard. “Unfortunately, the entries this year fall short of this expectation as each book was found to manifest incompetence in the use of language.
Many of them showed very little or no evidence of good editing…Hence, there will be no winner this year,” the Prize Advisory Board Chairman, Emeritus Professor Ayo Banjo, had announced before a coterie of stakeholders at the Lagos Sheraton Hotel in Ikeja that year.

Somehow, the prize had moved into its fourth cycle without controversies so far. Winners like Abubakar Adam Ibrahim in 2016, the late Ikeogu Oke in 2017 and Soji Cole in 2018 have emerged on the heels of each other and there are no reasons not to eagerly await a winner for this year’s prize for children’s literature.
The literary prize, which is currently the biggest in Africa and among the world’s most valued, has definitely turned around the values of the Nigerian literary scene.
Not only has the prize been complemented by the N1 million Literary Criticism Prize, its winners have earned their place in Nigeria’s literary hall of fame. Reading tours, organised especially for recent winners, have helped engrave their names in the collective consciousness.

Also, it is likely that the Nigeria Literature Prize, which is on currently its 15th year, had influenced the annual 9mobile Prize for Literature (formerly known as the Etisalat Prize for Literature), which was inaugurated in 2013 as a pan-African prize celebrating first-time African writers of published fiction books.
There is, therefore, no doubt about the fact that the Nigeria LNG’s intervention in the literary scene has breathed new life into a hitherto struggling industry. Every year, publishers jostle to position their authors for the prize.