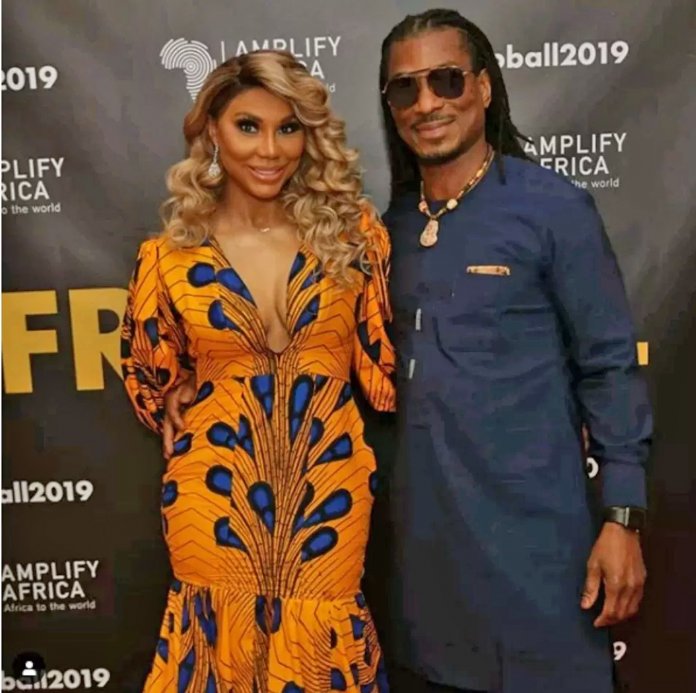 You can possibly tell of a woman who is deeply in love with her man from the way she acts or speaks about him and truly so is Tamar Braxton, the youngest of the American Braxton sisters: “He’s so fine I can’t take it sometimes. He’s like a whole snack, a lunchable. He lives in LA. He’s originally from Nigeria but he has lived here for a while. He went to Harvard Business School. He’s so super-duper smart. He’s so amazing. I’m so proud of him. He’s so kind,” she vouched to Wendy Williams during an appearance on her talk show last September.

Tamar and Adefeso stole the show last Saturday at the 2019 Afro Ball in Los Angeles, The media personality, Tamar, stunned in long Ankara dress as she posed with her Nigerian boyfriend at the event. Harvard-trained Adefeso is a multi-millionaire financial consultant.

Tamar appears hell hooked to the Nigerian. It’s the first love interest she had shared after splitting from her nine years marriage with Vince Herbert. Their divorce is yet to be finalised. The Grammy nominee appears to be having a new lease of life, loving herself all and gushing about her new man whom she has been in a relationship with since May 2018. So it was all newsy when she chose the Braxton Family Values Season 6 premiere party, to go public with her relationship with her new man.

Tamar Braxton and Vincent Herbert’s tumultuous relationship (which was shown on Braxton Family Values) ended when she filed for divorce in 2017. The former couple is currently seeking joint custody of their son, Logan Vincent Herbert (born 2013). Sometime in 2018, Tamar’s new relationship was doing the rounds on the rumour mill. She was playing coy about her rumored new relationship on social media without revealing her new man’s identity.

The 42-year old would then make the big reveal less than a day after she first announced that she and her mystery African man had broken up. She had earlier said that she was single again and ready to mingle. In a follow-up post, she had also asked her followers not to trust anyone. This post had led to rumours that her Nigerian lover must have scammed her. That changed when Tamar appeared on The Wendy Williams Show in September 2018.

She admitted that she had been dating Adefeso for three months, since meeting him at a friend’s birthday party. “But it feels like forever”, emotionally laden Tamar had enthused. Adefeso was also in the studio but in a separate space on that day.

Adefeso said he first flew to New York City from Lagos with $250 in cash on him. He had no job, nor a place to live. Nonetheless, he was determined to succeed and prosper.

As regards his family’s view of his beau, Tamar said: “He’s really kind of, like, hard to not love because he’s a great guy, he comes from a great family, he has great morals. He loves my son to pieces and we get along great, and he’s great. But Y’ all won’t see David up and through this new season. You won’t see a whole lot of him,” she stressed, saying “Only because I’m not ready to divulge everything. It’s new… I kind of just want to keep it to myself for as long as I possibly can.”

She also added that David is private and is “adjusting” to this new spotlight: “He’s definitely adjusting, but he’s not, like, a television person.”

Once the American singer was impelled to defend her new Nigerian boyfriend after a social media user warned her that he might be married back home in Nigeria. That was immediately after she had revealed on Twitter that she was dating a Nigerian guy whom she had just met. After sharing the post on Twitter, one of her followers tried to warn her that the relationship might seem rosy, until she discovers he is legally married to another Nigerian.

As the troll opined, “It’s all fun and games till you find out they are legally married to a tribe of women in Nigeria.” But Tamar who has been married twice quickly came to his defense and further revealed that they would be coming to Nigeria together very soon for his mom’s birthday.

Born March 17, 1977, Tamar is a singer, songwriter, media personality and reality television star. She began her career in 1990 as a founding member of The Braxtons, an R&B singing group formed with her sisters. The Braxtons released their debut album, So Many Ways, as a trio in 1996, and disbanded shortly afterward in 2000.