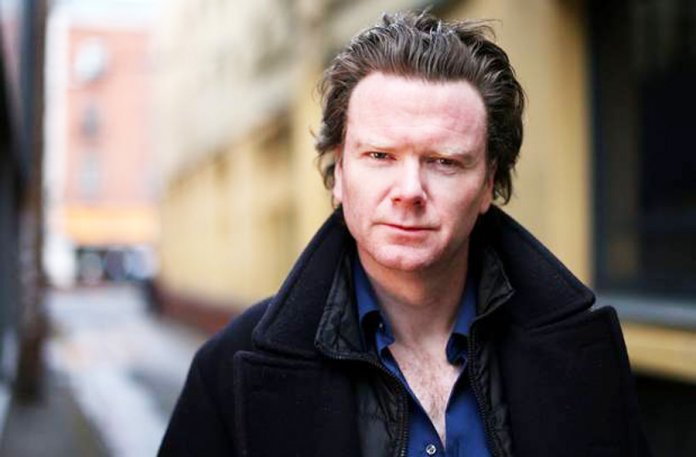 Multiple award winning Irish film Director Terry McMahon is part and parcel of an upcoming Nollywood cinematic project, ‘Caged in The Creeks’, alongside Nigerian writer and movie producer Leke Akinrowo. McMahon, renowned for hit movies like Patrick’s Day, Batman Begin and Charlie Cansanova, among others, is expected to bring his wealth of Western film production and acting knowledge to bear on the new action thriller. The outspoken and energetic film personality in an interesting conversation about the movie project, shares his experience and time in Nigeria with journalists in Lagos. Ferdinand Ekechukwu and Oluchi Chibuzor were there

How did this project ‘Caged in The Creeks’ and your involvement come about?

Bisi Adegun came to Ireland years ago and he opened the first Irish-African Theater Company and he asked me to do some workshops with the cast. At that time, I was working in television and earning a decent living. So, I came and did the workshops and they loved them and there was remarkable reaction and he asked me at the end, how they owe me? I said it’s on my house, you don’t owe me anything, I think what you are doing is important and I think it’s important an issue we should embrace. Then, Bisi asked me we meet later and we met with a friend of mine Jimmy, who is artistic Director of a theater in Ireland and Bisi asked we revolutionised Irish theater and there was this famous play in the Canon of Irish Theater called the “Play Boy of the Western World” and the central character in the ‘Playboy of the Western World’ is a young guy called Christy Mahon. He is Irish and is white as you can possibly get. So, I said if you want to revolutionise Irish theatre, make Christy Mahon in the ‘Playboy of the Western World’ black. You know most people would think that was insane, so Bisi is insane enough to think that it was a good idea. He went to meet the owner of  Radid Oil who is a Booker prize winner and one of the greatest writers in the world, and Radid Oil and Bisi wrote the Playboy of the Western World with Christy Mahon a black. It became a huge hit. So fast forward years later, Bisi is back here in Nigeria, he is talking to Leke and Leke said I want to revolutionise Nollywood, how do I revolutionise Nollywood? And Bisi, like the fucking lunatic he is, told Leke this story about this guy when he asked him how he revolutionised Irish theater and Leke thought that was a sign from God. So, here I am now supposing to be revolutionising Nigerian cinema because of God and Bisi’s identity.

Having visited production locations and met Nigerian actors, how excited are you about this project?

It’s amazing because we met some serious heavyweights in the last few days and I started every meeting with saying that I am not here to judge you, I am not here to test you or audition you. I am the guest in your country. I know how good you are already, but what we are trying to do is get into the realm of character where their capacity to go to the places they are not normally allowed to go is going to portray both of us. So, I think that one of the bravest societies in the world are actors because they put their soul in front of the lens of the camera, so a bunch of strangers can feel something in the dark. That soul will be unbelief, that generosity will be unbelief and that’s the realm am trying to connect with them. So each of the actors we have sat down with has had a profound response in the sense that they have very quickly know am not the kind of guy that try to manipulate them or exploit them I just want us collectively to make something remarkable or at least as aspire to that.

Which of the Nigerian movie practitioners were you able to connect with?

Well Richard Mofe Damijo (RMD) obviously whose is iconic. But again I shouldn’t be surprise because it is the same all over the world with the generosity of actors. He was decent beyond belief. He was so filled with curiosity. He was so filled with excitement when we began to talk about the project. And it’s not a false excitement. It’s an excitement of an actor who gets excited by discovery. Ramsey Noah was the same thing. You are looking at extra-ordinary man, the power house of a man who I think he is extra-ordinary active and he is initially reticent and then 10 minutes into our conversation he has the excitement of a teenager again who forgot what it was almost like to love. Kate Henshaw, she walks in and she is just a power house of potential. You look at her and you go ‘this woman is a ticking time bomb.’  And I love actors like that. I love actors who want to bring everything to a whole new level. I have no interest in an actor doing what I tell them to do and nothing else; that is tiresome. I want an actor to come up with better ideas than I have. I want an actor that will go toe-to-toe with me, and by the end of it, we are both exhausted going till we get tired. That is the realm we want across board with it and all the actors we met that is how they behaved, Keppy as well. Keppy Ekpeyong again is an extra-ordinary character, just a force of nature, Fantastic Mountain of a man, who yet is like a child when it comes to a discoverable moment. We want to find the discoverable moment.  An actor who is driven by their ego will very, very quickly expose the banality of their performance and actor who is driven by the desire to discover, can take us to places we never even conceived of.

What’s your view about the script, the story and the producer Leke Akinro of this film ‘Caged in The Creeks?

Mr. Leke makes me write till my fingertips bleed, and I think it’s a bit wrong frankly (he said joking and laughing). Again it’s an action thriller. An action thriller has bombs and explosions and all that stuffs, but for me, watching all these when I was younger, the great American action thrillers of the 80s, and the 90s, the thing you took away was not a memory of an explosion but an emotion that you had a visceral reaction to something that somebody did. You are surprised and shocked of how you became immersed in relationship from the unfolding heroism and cowardism, betrayal and honour of these people involved. Because when you have an action thriller time is compressed. People who are normally trying to be decent people are certainly exposed to the most profound level and they discover who they are for better or for worst; sometimes horribly exposed for who they are and sometimes heroically. So when I looked at the script I look for those elements. That is why I loved meeting the actors. I want to move in close as quickly as possible into the landscape of the human face. That to me is the greatest geography there is and when you have an actor who has the courage to allow you enter their soul by what they are trying to conceal rather than demonstrating what they are trying to reveal an audience can be in the dark and go ‘why is my heart beating?’, now we got an action thriller.

What has been your experience in Nigeria like this second visit viz-a-viz the first time?

I hate to say it, but I have been in Paris, London, Moscow, Berlin, Chinghai, I have been to cities all over the world and I have never seen in one square mile more beautiful women anywhere in the world than there is in Nigeria and its killing me. I’m serious (laughter across). The most beautiful women, I don’t know what the hell it is in your food or your DNA but when this women walk in around here, that will just give you a heart attack with utter adoration, and then another one passes, and then another one. I have seen 20 women in an half an hour in any given spot in Nigeria that you would not see in all of the cities in the planet. The problem is all your men have kept all these women.

Tell us about the Nigerian food you have fallen in love with?

The first time I was here, I was taking prescribed anti-malaria tablets. When you come to the country there is a bit of a scam really, but there are a whole bunch of injections to be taking, some which are necessary but others which are nonsense. This time I came over and I dumped them all in the bin and took nothing. Not only have I felt amazing, but the foods you put them in your mouth, as a white boy your head starts sweating, your hearts starts beating and your balls start going so what is this what I have been missing all this time. The food is blowing my mind I loved the food especially the Edika-ikong delicacy.