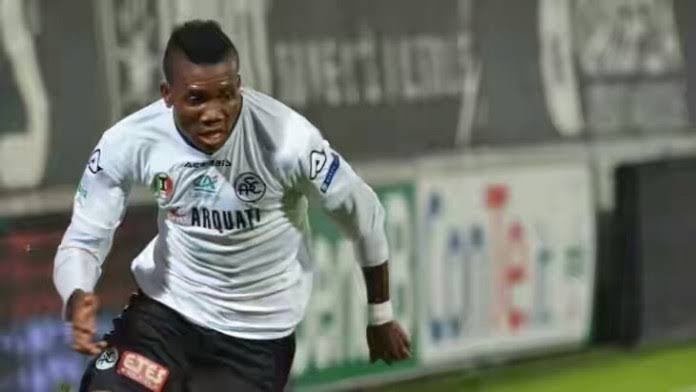 Even though they still have one big game to play this weekend- Championship play-off final against Aston Villa in which only a win would confirm their Premier League status, Derby County are already projecting for the future as The Rams are hoping to bolster their team with Nigerian Spezia of Italy sensation, David Okereke

Derby County are having a great season and it could get even better this weekend and have made it to the Sky Bet Championship play-off final after a dramatic comeback victory over Leeds United and one win against Midlands rivals Aston Villa would see them return to the Premier League. Even though their status for next season is not confirmed, the club is looking for new signings and have found a player they hope to bring to the iPro Stadium.

The Rams are therefore fighting numerous other teams in an attempt to sign Spezia’s David Okereke according to a report from Italian publication Calcio Mercato.

Little known Okereke, who currently plays for Spezia in Serie B, the second tier of Italian football has been impressing so far this season. As a striker, he has shown he is great at both scoring and creating this season, scoring 10 goals for the Little Eagles but even more impressively also making 12 assists. This has led Derby to be interested in signing him though this may end up changing depending on if they get promoted or stay in the Championship.

However, the East Midlands side are facing a lot of competition for Okereke’s signature. The other teams are said to be interested in signing the 21-year-old striker Atalanta, Cagliari, Sassuolo, Genk, Standard Liege and Dinamo Zagreb. That’s a lot of very reputable teams also looking to sign this player and Derby may struggle to be the best option for him.

From Italian giants-Juventus and Inter Milan to Premier League sides- Crystal Palace and Wolverhampton Wanderers names that have been linked is the product of the Football College, Abuja.

After scoring his 10th Serie B goal of the season, Premier League strugglers, Crystal Palace who had had goalscoring challenge from the beginning of the season is turning their direction of Spezia striker.

Palace have been looking to add goals to their squad, with Roy Hodgson’s men among the lowest scorers in the Premier League.

Crystal Palace have identified a new striker target in Okerere and are interested in the 21-year-old forward who has lit up Serie B this season with Spezia after The Eagles hover above the relegation zone.

Okereke has scored 10 goals for a team appropriately nicknamed The Little Eagles while producing another 12 assists. That is a fine tally for a player who continues to go from strength to strength in the Italian lower leagues.

Palace were said to have sent scouts to watch Okereke in action during Spezia’s thrilling 4-4 draw away at Brescia and Nigerian forward did not disappoint as he scored one and set up another at the Mario Rigamonti Stadium.

It is not certain how much Crystal Palace would be willing to pay for Okereke but they are likely to face competition from several clubs.

Serie A side Inter Milan are also already looking at the prospect of Okereke coming to San Siro in the summer.

Linked with a move to Standard Liege of Belgium last summer, he decided to extend his contract with Spezia till 2022 upon his return from a productive loan spell from Serie C side Cosenza, where he spent last season on loan.

Inter Milan had been tracking the 21-year-old in view of signing him last January with the option of leaving him at Spezia on loan till the end of the season before a decision will be made on his involvement with them in pre-season next summer.

No bid has been tabled yet but it’s believed that Inter are confident of their strong relationship with Spezia and a deal could be done if all goes according to plan.

According to Italian outlet Il Secolo XIX, as cited on Inside Futbol, Turin giants, Juventus are also keeping a close eye on Okereke’s development. The report claims a number of top-flight Italian teams have also registered an interest.

The 21-year-old signed a two-year contract extension with Spezia last season before he was farmed out on loan to Società Cosenza Calcio.

Born in Lagos, Okereke began his career in Italy with Lavagnese before his shift to Spezia in 2016, he rose through the ranks before making his professional debut against Novara on April 9, 2016.

He has played 36 games in total for Spezia across all levels, scoring eight goals while providing one assist.

Okereke is a product of Football College Abuja, the academy that produced AS Roma young duo Sadiq Umar and Nura Abdullahi.

Nicknamed “Sadiq Umar II” by fans of Spezia due to the fact that he passed through same route before arriving at the team like former forward Sadiq Umar, who is now at Bologna after a short stint at Roma.