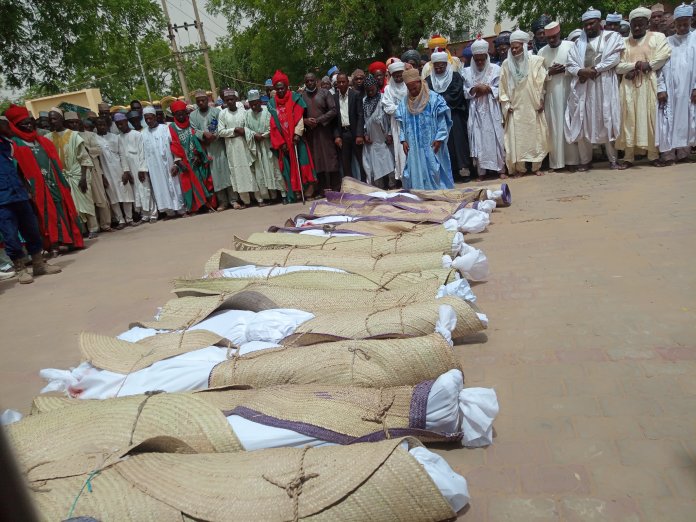 The remains of 18 persons killed by armed bandits in Batsari Local Government Area of Katsina State were on Wednesday buried amidst eulogies.

The victims, mostly farmers, were said to have been attacked by bandits while cultivating their farmlands at Yar Gamji village of the council.

Protesting the killings, aggrieved youths had on Tuesday night ferried the corpses of the victims from Batsari to Katsina, the state capital, where they displayed them before the Emir of Katisna, Dr. Abdulmumini Kabir Usman, and Governor Aminu Bello Masari.

Performing the funeral rites, the Chief Imam of Katsina Central Mosque, Mustapha Ahmed, prayed for the repose of the souls of the deceased and sued for peace.

Addressing journalists shortly after the funeral rites, the District Head of Batsari, Alhaji Mannir Ruma, said bandits had earlier threatened that there would be no farming activities in the area in this year’s rainy season.

The paramount ruler said the bandits had been harassing farmers in the area with sophisticated weapons, adding that the victims were cultivating their farms when the bandits ambushed them.

He called on security agencies and the state government to rekindle their efforts to curtail what he described as an act of God to enable farmers return to farm.

Also speaking at the funeral, the Caretaker Committee Chairman of Batsari, Mr. Mannir Mu’azu, lamented that the horrific incidences of bandit attacks had continued unabated in the area due to inadequate security.

According to the council boss, security personnel in the state were not doing anything to tackle the deadly attacks against residents in the area.

He stated that the situation if left unchecked would affect this year’s farming season, as according to him, many farmers in the area had vacated their farmlands due to fear of being attack by bandits.