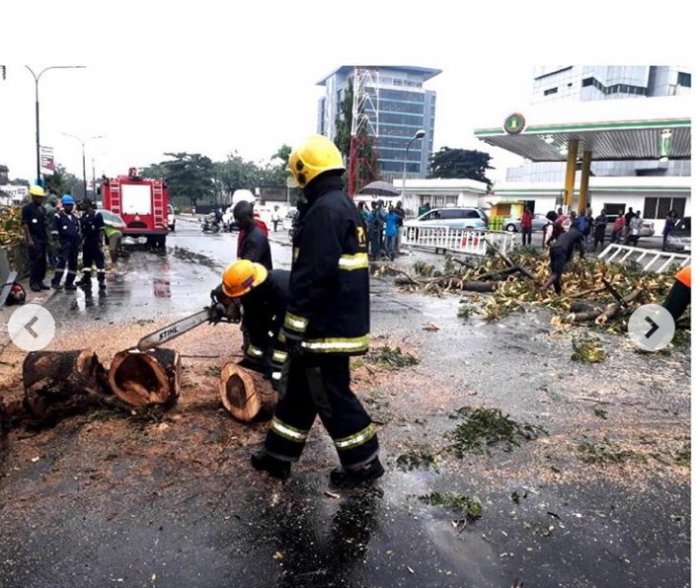 Residents in Lagos on Monday witnessed a heavy downpour that caused not just massive flooding in parts of the mega city but also destroyed some properties.

A number of houses and roads were submerged by the flood as the rain lasted for several hours.

Particularly affected were parts of Ikeja, Oshodi, Ikoyi and Victoria Island as the flood submerged the roads, which led to gridlock and forced many to seek alternative routes.

The heavy rain also fell trees at Kingsway road in Ikoyi and although there were no casualties, two cars were affected.

At the Ilasamaja area, a fire outbreak was recorded while the downpour brought down two buildings in Abule Egba and Oshodi.

According to reports, the fire outbreak which was doused by emergency workers, happened after thunder accompanied by lightening struck the one-storey building.

Reacting to the incidents, the Lagos State Emergency Management Agency (LASEMA) said: “The LASEMA Response Unit was alerted to a fallen tree on Kingsway road, Ikoyi; by NNPC filling Station.

“Although the tree fell on two moving vehicles, there were no casualties as the response team in conjunction with Lagos State Parks and Gardens Agency (LASPARK) and Lagos State Traffic Management Agency (LASTMA) officials, made the decision to cut down the tree rather than await its removal by a crane, which would have affected the flow of traffic.

“In addition to the tree which was cleared off the road at Ikoyi, the Response Unit also responded swiftly and simultaneously to a fire outbreak at Ilasamaja and two collapsed buildings in Abule Egba and Oshodi due to the heavy rain in Lagos this morning.

“No casualties were recorded at any of these locations and the areas still under evacuation have been cordoned off for safety and security reasons.”

Meanwhile, the Lagos State Government has assured residents that it had put in place necessary measures to address challenges posed by heavy rainfall, as the rainy season gradually approaches.

In a joint statement released in Alausa on Monday, the Permanent Secretary Ministry of Information and Strategy, Mr Fola Adeyemi and his counterpart in the Ministry of the Environment, Mr Abiodun Bamgboye, urged Lagosians to remain calm as the unpredictable pattern of rainfall currently being experienced is a natural outcome of climate change.

The government stated that it was not unusual to occasionally experience flash-floods, especially in a coastal state like Lagos, as well as during rains of high intensity, as it occurred today, but assured Lagosians that in a matter of time, they will all disappear and be contained by the drainages.

According to the statement: “Sometimes when it rains, we are likely to have flash-floods on our roads as it sometimes happens in other parts of the world, but the relief here is that the flash-floods will disappear in a couple of hours”.

The statement also assured Lagosians that relevant government agencies, like Drainage Services Department, LASEMA, LASPARK, had been put on red alert to adequately respond to any unforeseen occurrences, during rains of high intensity as well as cart away fallen trees, Electricity poles and confront any other emergencies, during the rains.

The government appealed to Lagosians to desist from the act of indiscriminate dumping of refuse in the drains as well as erecting structures on drainages and their alignments as these acts are capable of precipitating flooding.

“The general public is urged to promptly report cases of indiscriminate dumping of refuse into drainage channels and unauthorised places as well as other incidents of drainage blockage to the relevant government agencies,” the statement added. 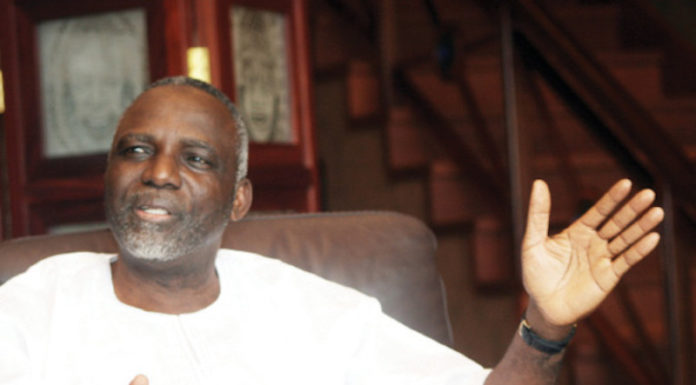