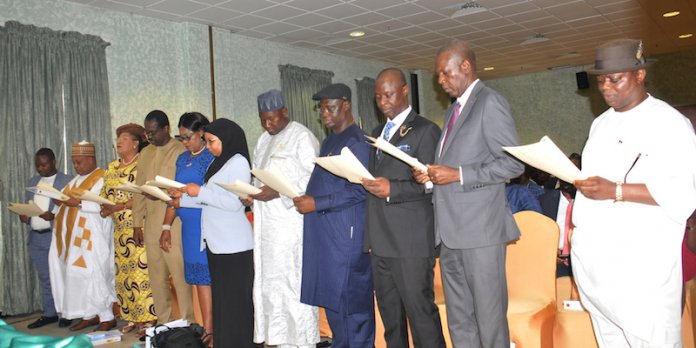 • Labour protests against minister over attack on members

After months of intrigues and power play, the Minister of Labour and Employment, Dr. Chris Ngige, yesterday inaugurated the board of the Nigeria Social Insurance Trust Fund (NSITF) in the old Banquet Hall of the Presidential Villa, with Mr. Austin Enejamo-Isire as the Chairman.

This is coming as the organised labour yesterday took to the streets of Abuja to protest what they described as “unwarranted attack” on workers who were on a peaceful protest at Ngige’s Asokoro residence over the delay in inaugurating the board of NSITF.

Speaking during the inauguration, the minister who described the process leading to the inauguration as long and tortuous, disclosed that before the composition of the board membership, extensive investigations were conducted into financial crimes and administrative flaws perpetrated by the former board members.

According to him, the output of the investigation was a useful guide for the composition of a new and promising board with the capacity to efficiently discharge its functions.

“The route to this event of today has been long and tortuous due to conditions precedent that needed to be addressed and resolved to ensure a viable and progressive NSITF for today and the future.

“Extensive investigations, both for financial crimes and administrative breaches had to be carried out in the NSITF with outcomes in the form of reports and recommendations that have provided guides for the formation of a new and better NSITF where a new board can thrive and efficiently discharge its statutory functions,” the minister said.

The conflict over the composition of the board dated back to 2017 when the then Acting President Yemi Osinbajo appointed a former labour activist, Frank Kokori, as the chairman of the board.

But Ngige rejected the appointment, saying it was not in compliance with Section 4(a) of the NSITF Act, which he said prohibited the appointment of any person with interest in labour matters to chair the board.

But since then, Kokori and the Nigeria Labour Congress (NLC) have been at loggerheads with Ngige over the vehement refusal of the minister to swear in Kokori who was the former Chairman of National Union of Petroleum and Natural Gas (NUPENG) as the chairman of the board of NSITF.

The conflict climaxed last week when the NLC president, Ayuba Wabba, led protesters to picket the private residence of Ngige with two tankers deployed to block the entrance of his house.

However, at the inauguration yesterday, Ngige recalled the degree of various corrupt practices perpetrated by the immediate past members of the board of the agency led by Mrs. Ngozi Olojeme, in alleged connivance with the management of the agency, which he said resulted in the looting of a whole lot of N48 billion out of the total N62 billion contributions made to the agency between 2012 and 2015.

According to him, consequently, the board chairman and other members had been charged to court by the Economic and Financial Crimes Commission (EFCC), leading to the recovery of some of the looted funds and the seizure of no fewer than 37 houses.

Ngige then proceeded to warn members of the board to operate within the limits of their powers, noting for instance, that the board lacks the capacity to award contracts.

According to him, there is a rather Parastatal Tender Board saddled with the responsibility of awarding contracts in accordance with the Public Procurement Act of 2007.

He also told the new board members that investment of NSITF must be “streamlined and compartmentalised in line with due process.”

Ngige also tasked the Fund to “with urgency retrieve all abandoned building assets in the real estate sector that are attested to all over the country at Lagos, Port Harcourt, Enugu etc with whereabouts of some of the title documents not known.”

In his remark at the occasion, the board chairman promised to bring his huge experience from the private sector to bear on the board, promising that the board would come up with policies and programmes that aimed at complementing the vision of the federal government.

He also said members of the board would make sterling contributions that would justify the confidence reposed in them by the president who appointed them, adding that the fortune of NSITF would be boosted this time in a deliberate effort to increasing the overall goal of the agency.

But contrary to expectation that the inauguration of Austin Enejamo-Isire, a chartered accountant and banker, would lay to rest the prolonged battle of wits between Ngige and NLC, it only aggravated it as labour yesterday embarked on protests nationwide to press for the inauguration of Kokori.

On Sunday, President Muhammadu Buhari redeployed Kokori to head the board of Michael Imoudu National Institute for Labour Studies (MINILS). But the appointment did not go down well with labour.

Labour Protests against Minister over Attack on Members

Meanwhile, the organised labour yesterday took to the streets of Abuja to protest over what they described as “unwarranted attack” on workers who were on a peaceful protest at Ngige’s Asokoro residence over the delay in inaugurating the board of NSITF recently.

Speaking while addressing the workers, NLC President, Wabba, said the protest was not against the NSITF board but the attack on workers by thugs suspected to have been hired by the minister.

Wabba who is also president of International Trade Unions Confederation (ITUC), said a directive was issued to all 162 members countries to picket Ngige anywhere around the world.

“We are here today to register our displeasure with the Minister of Labour and Employment, Chris Ngige, for hiring suspected thugs to attack us on Wednesday during a peaceful protest/picketing at his residence.

“The minister’s attitude was against international best practices as well as the ILO Conventions and even the Nigeria Constitution that guaranteed the right of workers to protest and picking. Instead of Mr. Ngige to dialogue with us, he resorted to hiring thugs to attack us. We are saying that Ngige is not fit for a public office and President Buhari should do the needful before such a man destroy his government, ” he said.

Also speaking, the ASUU president, Prof. Biodun Ogunyemi, urged President Muhammadu to conduct a psychiatric test before appointing anyone to serve as a cabinet member.

He said the call to conduct such test became necessary due to the ongoing fracas between workers and the minister who ordinarily should understand the working of labour.

“ASUU as a union condemned this attack on workers by a man who should protect and defend them. To say the least, we have lost confidence in him. We are also calling on President Muhammadu Buhari to conduct a psychiatric test on each of his cabinet members to ascertain their mental stability; this would save the country an embarrassment as this.”

The president of Judiciary Staff Union of Nigeria (JUSUN), Marwan Mustapha Adamu, on his part called for an urgent investigation with a view of bringing to book the hired thugs who attacked the protesting workers.

He said the organised labour has resolved to embarrass the minister anytime he is seen both within and outside the country.

The workers who assembled at the Federal Secretariat were seen with placards with different inscriptions including, “Ngige must go”.