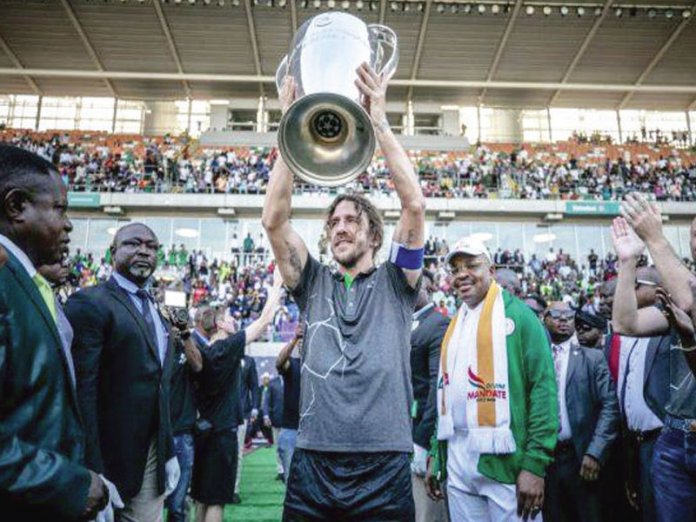 Raheem Akingbolu writes on the place of sponsorship in brand positioning

Music and Sports are fast becoming the most potent platform for marketing because of the affinity between fans and their preferred teams or music stars, as the case may be.
In today’s market, handlers of top brands always find the two areas tempting because they are the easiest routes to the heart of their teeming consumers.
This explains why brands jostle to associate with World Cup and other sporting global competitions.

In an interview with THISDAY, a former Chief Marketing officer at MTN Nigeria, Mr. Bola Akingbade, had opined a few years ago that a company that seeks to maintain a strong brand must employ strategies that will elicit top of mind awareness while making the brand relevant beyond its functional benefits in a bid to get maximum loyalty.

In line with this belief, the Heineken brand, from the stable of Nigerian Breweries, has consistently used its sponsorship of the UEFA Champions League to promote its brand essence and create a top of mind awareness among its high end consumers.

The brand has also appointed sport personalities and music icons as ambassador to boost its market influence.
Poised to tell a Nigerian story that will resonate through families and cultures across the country the beer brand, had three years ago, teamed up with Nigerian-American singer, Jidenna to bond more with its patrons.

In a TVC that was then airing on television, Jidenna was seen sharing gifts with his family after a trip back home, a perfect representation of the bond that is shared by many Nigerian families.

The signing of the music star as an ambassador for the campaign has since been described by many analysts as a classic move because Jidenna is seeing as someone who believes strongly in the importance of family and has never hesitated to show off his own.

Top Notch
For a brand that has been the go-to beer brand in over 192 countries of the world connecting families and friendships, the announcement early this year, that its promoters would facilitate the coming to Nigeria of Spanish legend, Carles Puyol with the iconic UEFA Champions League trophy, was received with a pinch of salt by many Nigerians.
According to the company, the former Captain of FC Barcelona, would be in the country to tour UEFA Champions League trophy and rub minds with stakeholders in beer industry and sports enthusiasts.

At a media briefing in Uyo, where Puyol, a three-time winner of the trophy with FC Barcelona in 2006, 2009 and 2011, was unveiled, Nigeria Breweries Marketing Director, Mr. Emmanuel Oriakhi had explained that the coming of the Spanish legend, Puyol with the iconic UEFA Champions League trophy to Nigeria was a way of rewarding consumers of Heineken and fans of UEFA Champions League competition.
He said Puyol’s visit would present the fans a unique opportunity not only to have a feel of the trophy but a wonderful photo opportunity with the strong defender, courtesy of Heineken.

According to Oriakhi, “Puyol is often ranked as one of the best center backs of all time and with an average height, he has won most aerial battles against towering footballers, either to defend or score crucial goals for his team. He is one of the legends of the number five jersey.

“Such a player fits into what we want to achieve by bringing the world’s best into our country for Nigerians to have a chance to meet him for the first time and have photo opportunities with him and the iconic UEFA Champions League Trophy too.
“We are excited to be creating premium experiences for our consumers and this is just part of the package we have in the ongoing season of unmissable moments.”

The tour
Two weeks after the announcement, the legend arrived Nigeria as promised and toured Uyo, capital of Akwa Ibom State and Lagos with the trophy. Although the UEFA Champions League trophy experience is in its third installment, the visit was the first time fans outside Lagos would have the opportunity to come very close to the iconic trophy because consumers in Uyo and surrounding cities enjoyed the viewing experience courtesy of Heineken.

Beside the tour, the former FC Barcelona captain involved in an “Unmissable” football match at the Uyo International Stadium, where he played with the ‘Shine-Shine Bobo’ team which, was made up of some of the brand’s most loyal consumers, as well as past and present football players like former Super Eagles captain, Austin Jay Jay Okocha, Mutiu ‘Headmaster’ Adepoju, Daniel Amokachi and Augustine Eguavoen, among others.

Active footballers in the domestic football scene largely from Akwa United, a Nigeria Professional Football League (NPFL) side, also had the privilege to flex muscles with the former international football star when team Shine Shine Bobo led by former Super Eagles captain, Austin Jay Jay Okocha and a host of other former national team players, took on the Chairman’s team at the stadium.

The game which lasted an hour saw Puyol leading the ‘Chairman’ team and Okocha the ‘Shine-Shine Bobo’ team, made up of ex-Nigerian internationals, current NPFL wave makers, Akwa United players and select consumers. With fun moments like directions from coaches, the Finance Director, Nigerian Breweries, Plc, Rob Kleinjan and the Marketing Director, Nigerian Breweries, Plc, Emmanuel Oriakhi, the game saw all the players and 30,000 fans treated to an hour of exciting moments.

After the Match, Puyol also joined football lovers to watch the quarter final of the Champions League between Manchester United and Barcelona at Emirald Event Center Uyo, which was won by Barcelona.
The following day, the train moved to Lagos, where ex-footballer also embarked on a tour across the state, amongst several other encounters planned.

Sustaining brand leadership
Though the event provided opportunity for sports lovers to feel the Trophy and interact with the legend, it also provided amiable platform for the Heineken brand to bond more with consumers.

Oriakhi, described the relationship between the brand and the UEFA champions’ league as ‘perfect partnership.
According to him, the status of the brand has continued to be in the rise with the partnership and it gladdens the heart of its promoters.

“From any angle one chooses to look at it, this is simply a marriage between two super brands. Heineken is a premium global brand while UEFA Champions’ League is also a unique brand that any global brand will love to identify with.

“Over the years, the partnership has been a strong brand supporting platform for the Heineken brand.
“But beyond that, we are excited to be creating premium experiences for our consumers and this is just part of the package we have in the ongoing season of unmissable moments,” remarked.

“This window of opportunity provided by Heineken for consumers and passionate fans is in its 12th year, has reached at least 33 countries across Africa, Asia, North and South America,” he added.

Speaking on his experience at the Uyo Stadium, Ekom Simon, who came from Eket, also in Akwa Ibom State to witness the match, described the sponsorship of the trip by the Heineken team as a great motivation to the locals.

“To me, this is the best a brand can do to identify with the masses, I was glad to see our local footballers playing side by side with Puyol and top Nigerian players, including Jay Jay Okocha. “This is not only a motivation for the players but an exposure for Akwa Ibomites. Personally, I feel so great and commend both the visitors and my state government that make Uyo an ideal place for such event,” he said.

So far in the ongoing campaign, the UEFA Champions League Trophy has visited South Africa, Namibia, Indonesia, Mozambique, China and now Nigeria. As the iconic Trophy begins its journey to USA, from where it would finally touch down in Madrid, Spain for the final match, there is no gainsaying the fact that Heineken, whose partnership with the UEFA Champions League dates back to the 2005/06 edition has redefined the relationship between the brand and consumers.
With the ongoing campaign about sharing ‘Unmissable’ moments which is based on the belief that every match in the competition has unmissable moments of actions for everyone to enjoy, the partnership has been raised a notch higher.