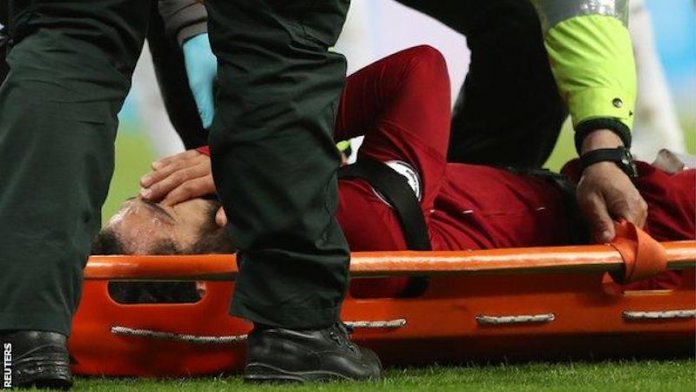 *Suarez says no celebration at Anfield

Although Liverpool emerged victorious from a bruising battle against Newcastle to remain in the hunt for the Premier League title, the Reds sustained too many wounds to summon a Champions League semifinal comeback against Barcelona tonight.

Coming from a late double from Lionel Messi last week in Camp Nou, that defeat has left Jurgen Klopp’s men with a mountain to climb to overturn a 3-0 first leg crushing if they are to reach a second consecutive Champions League final.

Liverpool have overcome such deficits before in the Champions League, most famously in the 2005 final against AC Milan.

But hopes of another famous European comeback at fortress Anfield were dealt a blow when Mohamed Salah was stretchered off with a head knock as Liverpool edged out Newcastle 3-2 on Saturday to move two points ahead of Manchester City at the top of the Premier League. That was before Man city’s clash with Leicester City last night.

Origi, who also scored a 96th-minute winner to beat Everton in the Merseyside derby in December, Shaqiri and Daniel Sturridge have made important contributions in a supporting role to a club record points tally for Liverpool this season.

“We are always ready to get on the pitch and make a difference,” said Liverpool left-back Andy Robertson.

“The lads who have been left at home and lads who are on the bench and haven’t come on, they are buzzing for us.

“There’s no egos in this squad and that’s why we are where we are today and long may it continue.”

However, with Roberto Firmino already ruled out due to a groin injury, few would give Liverpool any hope of overhauling a three-goal deficit without two of their prolific front three should Salah not start.

Klopp therefore has a difficult balancing act deciding whether it is worth emptying the tank of his injury-hit squad once more on Tuesday or to save their legs for Wolves’ visit to Anfield on the final day of the Premier League season.

“We are now qualified for the league final, which is brilliant,” said Klopp at taking the title race to the final game of the season.

Despite a sensational season, Liverpool’s chances of winning either trophy are fading.

To have any hope of a first league title in 29 years, Klopp’s men must hope that Manchester City’s relentless run of 12 straight league wins comes to an end either at home to Leicester in their game in hand on Monday, or at Brighton come Sunday.

Barcelona will also not be complacent heading to Anfield a year on from letting a 4-1 first leg lead against Roma slip away in the quarterfinals.

Messi made it clear from before the season began that the Champions League was his and Barca’s primary target in his first campaign as club captain.

Moreover, while Liverpool toiled on Tyneside on Saturday night, Barca coach Ernesto Valverde had the luxury of making 11 changes for an inconsequential 2-0 defeat to Celta Vigo having already wrapped up the Spanish title.

Yet, Origi’s winner at Newcastle personified Liverpool’s persistence and refusal to give up.

Four times in their last seven league outings Liverpool have won the game in the final 10 minutes.

Now they must harness the same belief if Barca are to be given a fright at Anfield.

“If we do fall short this season we will be back next season and we just need to keep going and keep going, and hopefully get what this club deserves,” added Robertson.

“First of all Tuesday, a hell of a task, but if we can get a wee bit of luck then hopefully we will progress.”

Meanwhile, Luis Suarez insisted yesterday he ‘won’t celebrate in the same way’ if the Barcelona striker finds the back at the net against Liverpool at Anfield tonight.

The Uruguayan striker opened the scoring for Barcelona at the Nou Camp last week in the first-leg and raced off behind the goal before finishing with a knee-slide celebration.

When quizzed on his celebration and if he would hesitate to do it again back at Anfield, Suarez accepted he would do things differently from that first leg.

‘Celebrating the goal? Everyone in football knows the importance of the goal I scored last week,’ he said.

‘I have all the respect in the world for Liverpool’s fans. I’m very thankful to them. If I score a goal here, I won’t celebrate it in the same way.’

Suarez, who spent four-and-a-half years with the Reds, further antagonised the Liverpool supporters after he clashed with Andy Robertson and Virgil van Dijk during a thrilling first leg.

Reflecting on his ‘fond memories’ on Merseyside, Suarez said he is prepared for a potentially hostile reception after his first-leg exploits but is hopeful for ‘more applause than whistles’ when he takes to the pitch.

He said: ‘All the work I did here and the way I’m thankful for Liverpool.

‘The team had four or five years without being in the Champions League, the people here know the work I did here. I think there will be more applause than whistles for me.

‘Being at Liverpool helped me in some many ways, it made me more professional, it helped me mature. Having players here with great experience allowed me to be better even more.

‘Being captain of Liverpool was one of the proudest moments of my career. I won’t forget it.’