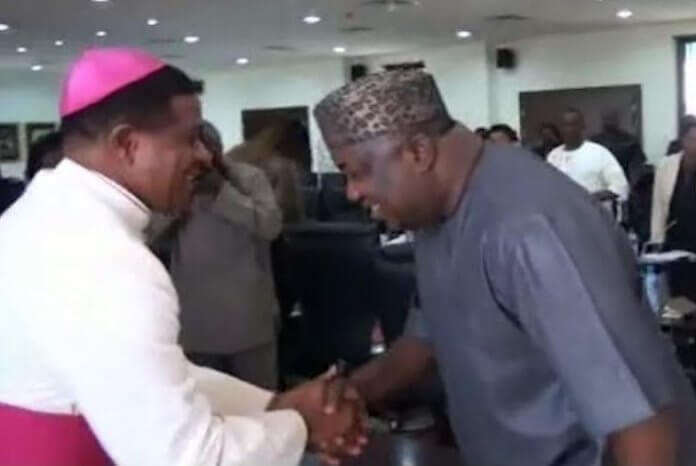 The Catholic Bishop of Nsukka Diocese, Most Rev. Prof. Godfrey Igwebuike Onah, has expressed delight at the commitment of Governor Ifeanyi Ugwuanyi’s administration in entrenching peace and good governance in Enugu State as well as ensuring that infrastructure is spread across the state, through its rural development policy.

Bishop Onah, who spoke during a thanksgiving Mass at St. Theresa’s Cathedral Nsukka, organised by a support group for Ugwuanyi, Gburugburu Support Group (GSG), for his victory at the polls, described the governor’s re-election as “a prayer answered”.

The cleric stated that the people of Enugu State are happy with Ugwuanyi and enjoined them to sustain their support for his administration, appealing against any act that could undermine the progress of the state.

According to him, “we have seen good governance in Hon. Ifeanyi Ugwuanyi, because he has spread infrastructural development in all the areas of the state through his rural development programmes, and Nsukka happens to be a great beneficiary of this his administration’s noble gesture”.

He therefore, assured the governor of the people’s unceasing prayers considering the enormous challenges involved in governance, stressing that “we are very happy with him, there is no prayer said in this church that goes in vain”.

Speaking at the church event, which was graced by the Deputy Governor of Enugu State, Hon. Mrs. Cecilia Ezeilo, the leader of the group, Mrs. Josephine Nwokedike, extolled the leadership qualities of Ugwuanyi, adding that the virtues have distinguished him as a great achiever and “an epitome of goodness”.

Nwokedike maintained that the governor is a humble, God-fearing, seasoned administrator and prudent manager of scarce resources, disclosing that the Mass was organised to thank God for his victory in the last general election and ask God to continue to bless his administration with the ability and commitment to provide more democracy dividends to the people of the state in the next four years.

She, therefore, re-affirmed the group’s unwavering support to the present administration in Enugu State and urged the people to continue to support and pray fervently for the governor and his team to do more for the state.

In her speech, the member representing Enugu South Rural Constituency in the State House of Assembly, Hon. Mrs. Onyinye Ugwu, pointed out that Ugwuanyi has bequeathed indelible legacies to successive generations in the state, adding that his administration has become a model for peace and good governance for other states to emulate.

She commended the governor for the harmonious working relationship between the executive and the legislature, stating that “the house is now more rejuvenated and has been working as a family with other arms of the government”.