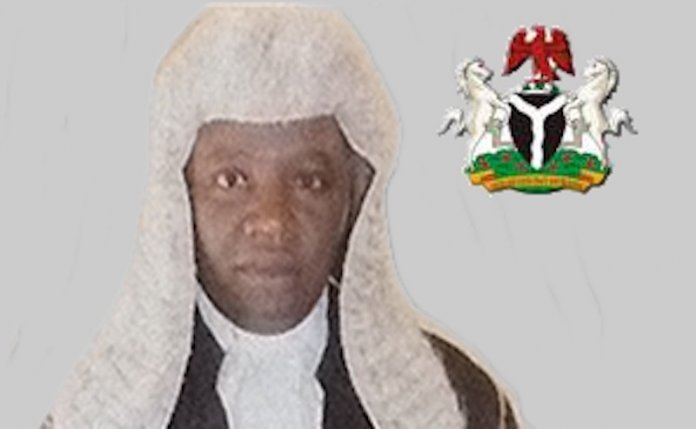 The National Judicial Council (NJC) on Thursday tendered a copy of the Revised Code of Conduct for Judicial Officers of Nigeria at the resumed trial of former Justice Mohammed Yunusa, a dismissed Judge of the Federal High Court.

The News Agency of Nigeria (NAN) reports that the document was tendered before an Ikeja Special Offences Court by a subpoenaed witness, Ms Fatima Gamawa, a Senior Legal Officer of the NJC.

Yunusa is standing trial alongside one Esther Agbo, a staff of the law chambers of Mr Rickey Tarfa (SAN).

Led in evidence by Mr Wahab Shittu, lead counsel for the Economic and Financial Crimes Commission (EFCC), Gamawa read aloud some excerpts from the document.

“A judge would therefore be wise to avoid recurrent contacts with a lawyer appearing before him in the course of a particular case if this could lead to a reasonable perception that the judge and the lawyer have a close personal relationship.”

Gamawa also read aloud Rule 2.5 which pertains to acceptance of gifts by judges from lawyers.

“A judge shall not accept gifts from a lawyer who might appear in a case before him if the gift is not one given to judges generally at festive seasons such as Christmas or Sallah gift,” she said.

While being cross-examined by Mr Robert Clarke (SAN), counsel to Yunusa, Gamawa testified that she had been in NJC’s employment for a year and that the Revised Code of Conduct of Judicial Officers was the only one she had come across.

While being cross-examined by Mr John Odubela (SAN), Agbo’s counsel, Gamawa revealed that the Revised Code of Conduct for Judicial Officers took effect from Feb. 24, 2016.

The NJC official noted that Yunusa was accused of judicial misconduct in 2015 before the Revised Code of Conduct for Judicial Officers took effect.

The commission also alleged that Yunusa collected N1.5 million bribe from Tarfa for the purpose of giving favourable rulings and judgments in the cases.

It also accused the former judge of receiving N750, 000 from a former SAN, Mr Joseph Nwobike, between March 2015 and September, 2015, to get “favourable” judgment in some cases.

Justice Sherifat Solebo adjourned the case until June 18 for continuation of trial. (NAN)