With organised labour insisting on immediate implementation of the new minimum wage law, 17 states have agreed to pay even as the federal government has advised that defaulting states should be taken to court by aggrieved workers for breach of the law.

Addressing workers at this year’s Workers’ Day celebration yesterday at the Eagle Square, Abuja, the Minister of State for Labour and Employment, Prof. Stephen Ocheni, said the federal government has shown that it cares for the welfare and well-being of Nigerian workers by hastening action on the N30,000 new minimum wage.

The minister said the new minimum wage law took effect from April 18, 2019, and that all entities, including states and local governments are to start paying immediately.

“Also, private sector employers are to do the same. We expect immediate discussions with the different Joint Negotiating Councils for consequent adjustments upstairs as a result of the movement from N18,000 to N30,000,” he said.

Ocheni further stated that the federal government had converted the tripartite committee on negotiations for new minimum wage to a standing committee, which will be responsible for setting new minimum wage after every five years.

He said having assented to the N30,000 minimum wage bill, the federal government is committed to its immediate implementation.
He added that workers now have the right to approach the Industrial Court to enforce the payment of the new minimum wage at all levels of government.
He added: “The tripartite committee on negotiations for minimum wage has transformed to a standing committee with mandate to negotiate a new minimum wage every five years.
“Trade unions are now encouraged to approach the Industrial Court on matters relating to the noncompliance with the New Minimum Wage Act for adjudication.”

The minister of state further explained that the tripartite committee is expected to commence talks on review of the present minimum wage six months to the end of the five-year-timeline.

In the state of the nation address jointly read by the NLC President, Mr. Ayuba Wabba, and his TUC counterpart, Mr. Bobboi Kaigama, the leadership of the labour movement said it expects immediate implementation of the new minimum wage of N30,000.
“We urge government to quickly finalize salary adjustment across the payroll of civil and public servants. We have already wasted a lot of time arriving at the new national minimum wage, we should not waste a single more second implementing the new national minimum wage across board. We urge workers to remain vigilant till total victory is won,” they stated.

NLC and TUC said they were not only going to push for compliance on minimum wage payment at all levels, but said henceforth the national leadership of labour will also take action against states owing salary arrears to workers to ensure that it is cleared.
The organised labour bemoaned the state of affairs in the power sector, especially the poor performance of privatised distribution companies.

Wabba, who read the first part of the speech, lamented that five years after the entities were privatised none of the set targets were achieved but said these power sector entities have continued to be a burden on the federal government, with a bailout of over N233 billion.

“It is sad that the Nigeria Electricity Regulatory Commission (NERC) appears soft on operators and hard on consumers. We call on the federal government now that the tenure of the DISCOs is due for renewal to review the entire privatization exercise and come up with the best approach to deal with this challenge,” the union said.

Labour also assessed the fight against corruption and advised that the crusade should be seen as a collective battle and therefore should be pursued in a transparent and holistic manner.

It urged the federal government to ensure that recovered looted funds are transparently accounted for and deployed into the execution of meaningful projects.

Wabba used the occasion to restate labour movement’s displeasure over the continued delay in inaugurating the board of the Nigeria Social Insurance Trust Fund (NSITF).

He said now that the May 1 deadline for the inauguration of NSITF board under the chairmanship of Chief Frank Kokori has expired, the workers will not allow the minister to have peace until their demand is met.

The umbrella of labour unions further commented on the just concluded general election, saying the elections were characterized by lots of electoral infraction.

It, therefore, demanded the implementation of the Justice Muhammed Uwais-led Committee Report on reform of the nation’s electoral system as a way forward.

On the mounting debt profile, the apex labour union said workers are concerned over the increasing debt accumulation by governments at all levels.

According to the NLC president, records indicate that about two-thirds of the government’s revenues go into servicing interest payments, with the principal still waiting for redemption at maturity.

“Even the Central Bank of Nigeria through the Monetary Policy Committee, recently cautioned the federal Government against Nigeria’s rising debt level. The committee warned that except the federal government came up with measures to address the situation, Nigeria’s debt might rise up to the pre-2005 Paris Club level,” he said

The Deputy Chairman of Senate Committee on Labour, Senator Victor Umeh, who represented the Senate president, commended Buhari for giving timely assent to the new minimum wage bill after it was speedily passed by the National Assembly.
He said there can be no meaningful development without the contribution and support of workers.

The senator representing Anambra Central on the platform of the All Progressives Grand Alliance (APGA), made a case for more investment in the development of human capital, adding that the future of the country depends on how efficiently and effectively the government is able to utilize the human resource potential.

In her goodwill message the Head of Services, Mrs. Eyo Etta, commended the resilience of Nigerian workers and urged them to continue to support the government

She said the president has succeeded in putting a smile on the faces of Nigerian workers by not only approving funds for payment of arrears of salaries, allowances and pensions, but also signing into law the new minimum wage. 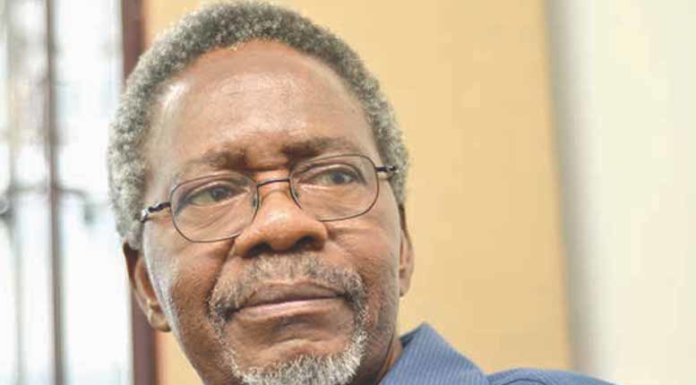