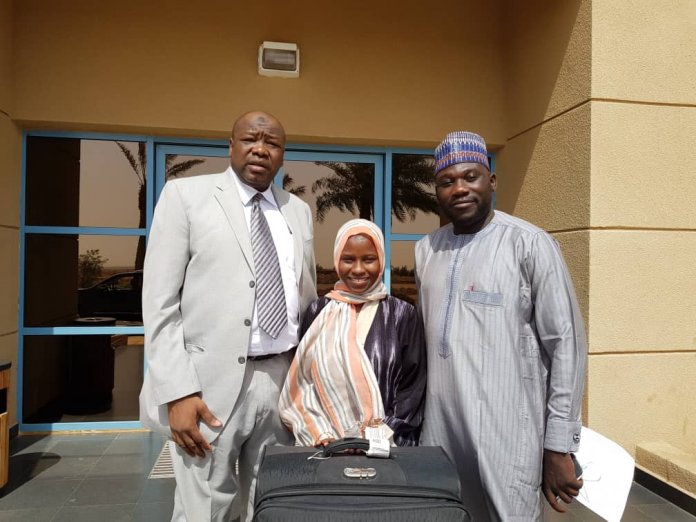 •Northern CAN: We can’t celebrate Aliyu’s release and forget Sharibu

The federal government has succeeded in securing the release of a Nigerian student, Ms. Zainab Aliyu, arrested and detained in Saudi Arabia for alleged drug trafficking.
The Permanent Secretary, Ministry of Foreign Affairs, Mr. Suleiman Mustafa, who made this known to journalists in Abuja yesterday, said the country’s diplomatic interventions paid off when the innocent young lady was granted freedom in faraway Saudi Arabia.

Mustafa also hinted that the other person arrested along with her, Mr. Ibrahim Abubakar, would also be released today.
Zainab, a student of Maitama Sule University, Kano, was arrested after a banned drug, tramadol, was found in her bag in Saudi Arabia, while she maintained her innocence, claiming that the substance was put in her luggage by unknown persons.

According to Mustafa, “I am very pleased to inform you that in the last couple of minutes that Zainab has been released to our mission in Saudi Arabia and that is a news that I believe will be very heart-warming and will be relieving also to both the family and Nigerians that have had to express their concerns and their care about these two Nigerians, who have found themselves in this situation basically as a result of some criminals whose activities have put these Nigerians into very difficult situation.

“I am happy to announce that Zainab, especially has been released in the last couple of minutes. She is with our mission. She is in good state and in good hands now and we believe the other gentleman, Ibrahim Abubakar, will also be released by tomorrow because by the time they were able to get Zainab out it was closing time at the prisons, so they couldn’t get him.”
“In the last few days, we have seen issues that were generated by the arrest, in Saudi Arabia, of a young Nigerian girl and another person, which is actually connected with a drug related offense.

“The ministry, from the date of such arrest, has put in place so many efforts in order to secure the release of that young girl and the other gentleman. We realised upon investigations at the Nigerian end that there is cartel that specialise in packaging drugs from the airport and attaching them to innocent passengers.’’

The ministry added that through investigation some arrests were made and are right now undergoing judicial process – prosecution, stating that the Ministry in conjunction with Nigeria’s mission in Saudi have made several efforts in order to establish the innocence of these people, the young girl and the other gentleman.

“Arising from that effort, at least we were able to bring to the attention of the Saudis the level of innocence of these two Nigerians and we have engaged over and over; we have given the mission various instructions and in a typical diplomatic way we have raised several note verbal to the ministry in Saudi.

‘’We have also from here sent the same notes to the Saudi embassy here and their consulate in Kano and we have piled up the pressure of intervention and there have been discussions at various levels between the Minister of Foreign Affairs and the Attorney-General of the Federation (AGF) on this same issue.

“We have passed document relating to the trial of the suspects that were arrested in Kano and passed also information on the judicial process and all that. The ministry has continued to use all available channels, especially in the context, the diplomatic channel while also pursuing the legal process from this end.”

Northern CAN: We can’t celebrate Aliyu’s release and forget Sharibu

Meanwhile, the northern states chapter of the Christian Association of Nigeria (CAN) has asked the president to double up efforts in securing the freedom of Leah Sharibu, following the release of Zainab Aliyu from Saudi Arabia detention.
In a statement by the Public Relations Officer, Northern CAN, Mr. Joseph Hayab, the association expressed sadness at how “innocent Nigerians” are suffering abroad for crimes they didn’t commit.

CAN northern states also commended the federal government’s prompt effort in rescuing Aliyu, adding that the same energy and effort be directed towards securing the release of Sharibu.
Sharibu, who was the only Christian girl among the 112 kidnapped from the Government Girls’ Technical College, Dapchi, Yobe State, in February 2018, is still in Boko Haram custody.

The association charged Buhari to treat all Nigerians equally as this will make citizens proud of the government and the country.
“CAN northern states rejoices with the parents of Aliyu and the government of our country for securing her release after she was arrested and detained in Saudi Arabia for allegations of drug trafficking,” the association said.

It added: “It is sad that many innocent Nigerians are suffering for a crime they know nothing about.
“This prompt effort by government is commendable and should be sustained for all and in the future, because this is what we want to see from our leaders in this country.

“But as we rejoice about this development, we are also compelled to ask this important question: Are all Nigerians equal or some are more equal than others?
“We are aware that many innocent citizens of our country have been arrested, some killed and others are still in detention; but we have not heard any directives from Mr. President to his Attorney General to take action about them with this kind of urgency.

“If we want our citizens to be proud of their government and country, then we need to show equal concern about what happens to everyone in this country.

“We cannot also celebrate the release of Zainab and forget Leah Sharibu who did not commit any crime but has been in captivity for over a year now.
“We, therefore, appeal to President Buhari to direct his security agencies to double their efforts and get Leah released and reunited with her parents.
“Leah, too, wants to enjoy the protection of her leaders.”