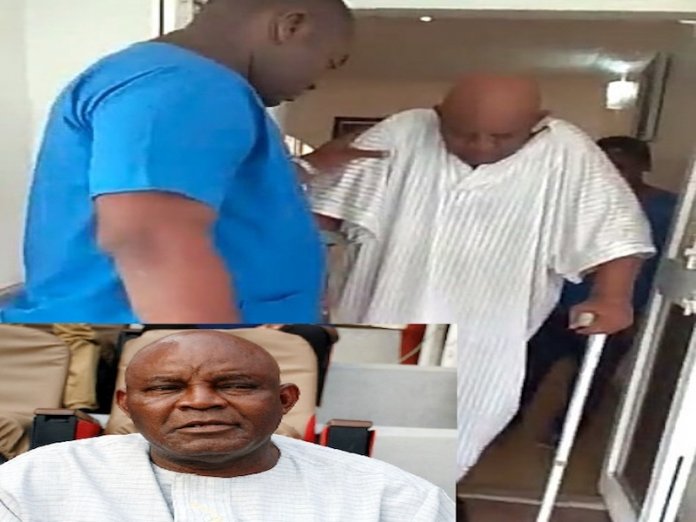 The news has pierced the cloud. Dean of defence, ex-Rangers International captain, ex-Super Eagles coach, ex-Super Eagles who captained the squad that won the 1980 African Cup of Nations “Chairman” Christian Chukwu is seriously ill. He is about to be flown to London (if he is not already in London) for an urgent medical surgery.

Christian Chukwu must not die. Sad to say, many Nigerian ex-footballers who had done Nigeria proud in many local and international football matches have died young in circumstances that suggest that they had no access to good medicine or due to poverty or sheer negligence. For example, the nation woke up one morning to hear that former dangling striker and two-time African Footballer of the Year Rashidi Yekini who in fact scored Nigeria’s vital goal against Bulgaria in the 1994 World Cup was dead. On the day Rashidi died, he allegedly woke up hale and hearty only to die later in the day.

Some claim that shortly before his death he suffered from severe depression. You will recall that on 25th May 2008 ex-Rangers International and Super Eagles striker Aloysius Atuegbu, whose powerful shots at goals earned him the sobriquet “block buster”, died. On 4th December 2008 ex-Super Eagles mid-fielder Haruna Ilerika died of a liver problem. On 28 September 2009 ex-ICC Shooting Stars and Super Eagles goalkeeper Best Ogedegbe died after being in coma for one week as a result of an eye surgery. And on June 6, 2016, ex-Super Eagles captain and coach, Stephen Keshi, who in fact captained the Super Eagles in the 1994 World Cup in the U.S., died of cardiac arrest en route to hospital.

From the preceding you can see how over the years many of our budding football stars have been left to die unsung. This is sad. Great footballers such as Chukwu who have generously rendered great service to their fatherland belong to the national icon worth preserving. If these players have given so much they should also receive so much. I remember last year when the Super Eagles were preparing for the World Cup Christian Chukwu was with the team preparing them for the World Cup. This attests to Chukwu’s selfless service to his country. Therefore we cannot abandon him. Happily, some public-spirited persons and bodies have hearkened to Chukwu’s assistance to save his life.

Last week oil magnate and business mogul Femi Otedola doled out a gargantuan sum of N18 million to Chukwu for his medical surgery in London. Also last week the President of the Nigeria Football Federation (NFF) Amaju Pinnick assured all that the NFF would not allow Chukwu to die. He said that the NFF had specifically set up a foundation to cater for the health of Chukwu. In the meantime NFF has appointed Chukwu its Life Ambassador. On his part, the charismatic Enugu State governor Ifeanyi Ugwuanyi went visiting Chukwu last week. After the visit the governor directed that Chukwu’s first son Emeka should be offered immediate employment in Enugu as a way of assisting the family. The governor had in the past donated money to ailing Chukwu.

These are praiseworthy solidarity. I am sure other generous Nigerians will follow suit and send their donations to Chukwu. Truth to tell, football has helped to project Nigeria abroad. Nigerian professional footballers are improving Nigeria’s battered image abroad. If you travel abroad and introduce yourself as a Nigerian to any foreigner, he or she is likely to exclaim, “Ah! you are from Nigeria, the country of Nwankwu Kanu, Mikel Obi, Victor Moses”. This tells you how popular and influential Nigerian top footballers are.

As far as many foreigners are concerned Nigeria begins and ends with Kanu Nwankwu, Mikel Obi or Victor Moses. But the paradox is that a Kanu Nwankwu, Mikel Obi or Victor Moses cannot win an election in his local government area in Nigeria. If you are in doubt ask politician Segun Odegbami who contested for Ogun State governorship under the platform of the Labour Party to enlighten you on the matter. Some can’t still believe that the former World Footballer of the Year and former star of AC Milan, Chelsea and Monaco George Oppong Weah is now the President of Liberia. But that is the reality. Liberia knows how to preserve her humanl capital

Ex-Super Eagles finest goaltender “Man Mountain” Emmanuel Okala, we gather, now lives in misery. Sylvester Egbogie whose two legs have been amputated is now sorrowing away in Warri. Ex-Rangers and Super Eagles star Christian Madu died in 2017 or so because he could not afford the medical bills. So, our ex-footballers need immediate assistance. NFF boss Amaju Pinnick has promised to set up a foundation for the welfare of Nigerian footballers. We pray that this comes to fruition. But beyond establishing a foundation for the welfare of Nigerian players, the federal government should set up an endowment fund for the well-being of Nigerian ex-footballers. Ghana Football Association (GFA) has done so. Nigeria should follow suit. Were such endowment fund in place, Chukwu and other ailing Nigerian ex-footballers would probably not be dying of sickness and misery at the moment. A nation that allows its human capital to waste away is tottering on the brink of collapse.