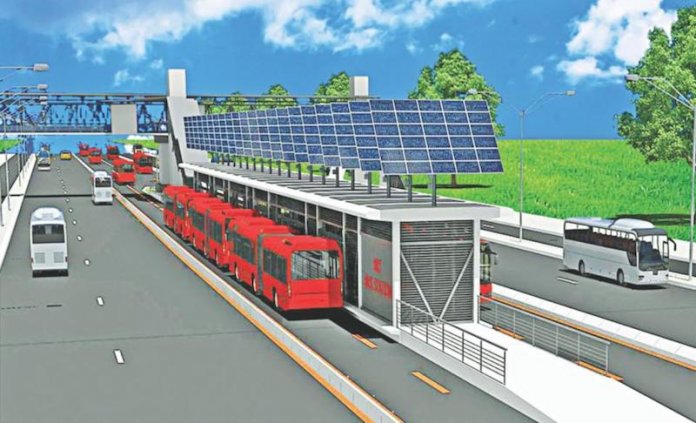 Chris Uba
The Kano State Government has concluded arrangement for a multi- billion-naira Bus Rapid programme(BRT) in the state.
The move was in furtherance of effort to ensure urban regeneration and sustainable transportation.

According to the state’s Director General, Media and Publicity, Ameen K. Yassar, the initiative, which is the first of its kind in the state, is a “tip of the iceberg infrastructural project” as the Ganduje administration commences its second term in office on May 29.

BRT is a high quality bus – based public transport system designed to deliver fast, comfortable and cost effective services at metro – level capacities. It does this through the provision of exclusive lanes with busways and distinctive stations typically aligned to the centre of the road, off – board fare collection and fast, regular operations.

Speaking shortly after completing discussion and signing of the MOU, in Zhengzhou, Henan, China, the state governor, Dr. Abdullahi Umar Ganduje, disclosed that his administration decided to embark on the project “to revolutionise transport and enhance ease of doing business in Nigeria’s foremost commercial centre.”

“Presently, Kano is the most populous state in the country. It has a population of over 16 million people. The main public vehicles are mini buses and tricycles which are not supportive of long – term mega city development, therefore an efficient modern system of public transportation must be established. This will reflect the position of Kano as a truly megacity,” a statement quoted him to have added.

Represented by the State commissioner for Works, Housing and Transport, Engr. Aminu Aliyu Wudil, the governor explained that the project has several benefits in terms of job creation, urban mobility and air pollution reduction besides improving the physical outlook of the state capital.
“We decided to partner with Zhengzhou Yutong because it is the world’s largest and reputed bus manufacturer with capacity providing Integrated Solution of Public bus transport system and several decades of experience”

“Kano state government is expected to invest not more than 25 percent of the project cost while the operator, Kano Metropolitan Transport Company is the main shareholder while the Chinese company will serve as the technical partner”.
The State Commissioner of Work, Engr. Aminu Aliyu Wudil, his counterpart in the Ministry of Finance, Aminu Mukhtar DanAmu and Yusuf Aliyu Umar signed on behalf of Kano state government and Kano Metropolitan Transport Company, while Mr. Zou Meikan and Guo Yuanyuan signed on behalf of Zhengzhou Yutong Bus Company, China and Zhengzhou Public Bus Communication Co. Ltd., China respectively.