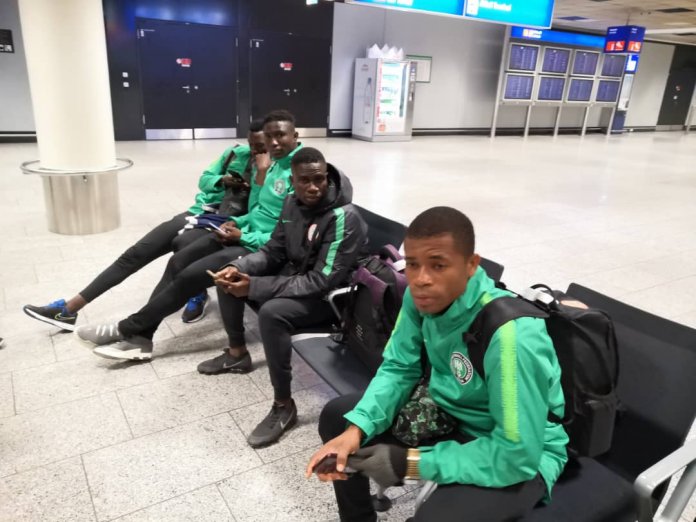 Nigeria’s Under-20 boys have arrived in Bad Goegging Munich in Germany for a three-week intensive final camping programme ahead of the FIFA Under-20 World Cup finals in Poland.

A delegation comprising team officials and 23 players traveled aboard a Lufthansa Airline flight from Abuja on Saturday night and arrived in Frankfurt just before 6am, before a 4-hour road trip to the city. The delegation is staying at The Monarch Hotel.

At the Nnamdi Azikiwe International Airport, Abuja on Saturday, the seven –time African champions welcomed the General Secretary of Nigeria Football Federation, Dr. Mohammed Sanusi, who charged the team to adopt good character and discipline as winning words in the camp and at the global championship, while eschewing any conduct that could tarnish the image of Nigeria.

“A good name is forever better than gold. While we implore you to go out there and put in the best efforts to win your matches and do the country and the African continent proud, it is important that you do so with good conduct, discipline and dedication, and with respect for the good name of our dear country.

“You are flying the country’s flag and also flying the continent’s flag. It is therefore incumbent on you to show good character on and off the field of play at all times and abide by the tenets of fair-play,” Dr. Sanusi said.

While advising the players and team officials to valorize hard work and patriotism, Dr. Sanusi assured that the NFF is committed to giving the team its full support, including payment of their bonuses and allowances in the training camp and at the championship in Poland.

In his response, team captain Ikouwem Utin thanked the federation for the support given the team so far and pledged that the players would give their very best to do Nigeria and Africa proud in Poland, while maintaining discipline as their watchword.

The Flying Eagles, two-time silver medalists at the FIFA U-20 World Cup finals, will fly out of Germany to Poland on 19th May, five days before their opening match of this year’s competition against Qatar’s U-20 team in Tychy.

They would afterwards tackle the United States of America on Monday, 27th May in Bielsko-Biala before concluding their group phase assignment against Ukraine on Thursday, 30th May at the same venue.

The 24-nation championship will hold between May 23 and  June 15.