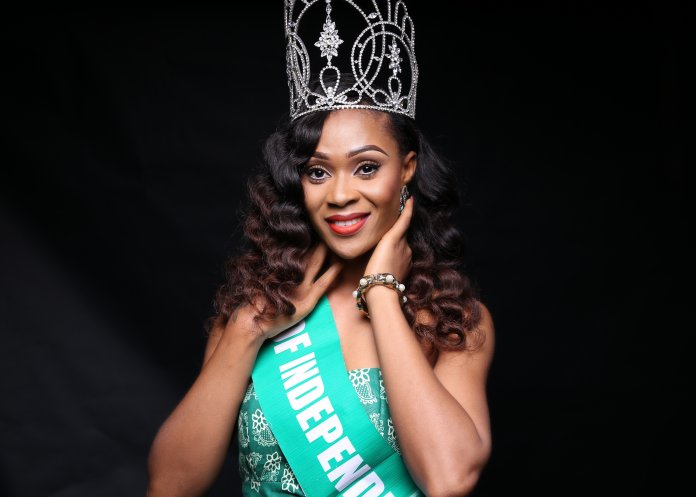 With all the trappings of a queen– a glowing, towering crown on her head delicately forming a halo on her glowing, flowing hair – her beautiful face glistens like twinkling stars in the dark sky. Her ravishing figure is enthralling with glazy eyes that seem to hypnotise. As she flashed her white, incandescent teeth all in the hall rise to acclaim not just her beauty, but her brilliance.

Yet, Cynthia Adinmah is more than just a beauty queen. She is a singer – with the stage name, Ferrycee. She is also a prolific and exquisite painter.

Add to that, she is a philanthropist. Funke Olaode explores Cynthia’s ingenuity, self-belief, vision and mission When she shot into limelight in 2007 as an undergraduate in the Theatre Arts Department of University of Port Harcourt, she was not given a chance. Her intelligence and beautiful face couldn’t win her the coveted crown of Face of Association of Theatre Arts students’ (ATAS) where she ended as the first runner-up.

She won Ada IMO 2013 under Adandiigbo beauty pageant, and was the second runner-up in Most Beautiful Face in Nigeria, 2014. Her dream came through in 2015 when she was declared the winner of Face of Independence Nigeria 2015. She has since moved on to establish herself as an actress, artist and lately a singer.

Following a quiet 2018 musical outing, burgeoning songstress, Ferrycee – her stage name is set to have an active 2019 musical campaign and to kick-start the loop, she’s taking on a bold step to create an offering which could be well received by fans and music pundits alike as a theme song to the Nigerian reality competition television series, Big Brother Naija (formerly, Big Brother Nigeria).

With a fourth season about to hit the screens, the “Obim” and “Bae” crooner decides to tease her fans with her new single titled “Big Brother Egwueji,” a song which sees her shower praises on the popular television series which is based on the Big Brother franchise Big Brother Nigeria Season 1 winner, Katung Aduwak, alongside Big Brother Naija Season 2 and 3 winners, Efe Ejeba and Miracle Igbokwe, have been the lucky ones to reap the benefits of the show and the contestants for the fourth season should share in Ferrycee’s lyrical content which tells on how the show has made an impact on Nigerians and Africans at large, most especially the youths.

“Big Brother Egwueji” song produced by Joe Waxon is just a number to wet fan’s appetite as Ferrycee would be churning out another single in weeks to come.

Hers has been a long walk to fame and recognition considering many years of disappointment in beauty contest but Adinmah says believing in herself coupled with compliments from friends kept her going even in the face of doubting Thomases.

“It has not been easy,” she recalled noting that every step all the way took determination and personal conviction.

“My long walk to beauty pageants began in 2007 when I was 19 and in year one at the University of Port Harcourt. I contested for Face of Association of Theatre Arts students’ (ATAS) in year one 2007 was the first pageant I contested and I was the first runner-up. For me it was a stepping stone because it gave me hug popularity then at University of Port Harcourt. I had to go for bigger pageants. I won Ada IMO 2013 under Adandiigbo pageant, 2nd runner up Most Beautiful Face in Nigeria 2014 and winner Face of independence Nigeria 2015.”

The songstress, born Cynthia Ngozi Adinmah, hails from Mbaitoli Local Government Area of state. From a family of seven with a set of twins, Cynthia attended St. Mark Nursery and Primary school, Gboko in Benue State and proceeded to the

Federal Government Girls’ College also Gboko. From there, she went to the University of Port Harcourt where she studied Theatre Arts and graduated in 2011.

Cynthia’s dream as a child has always been to impact her world.

“My parents told me that I had talents so it made me to thrive to do everything I came across to enable me pick the best and focus on it. My dream is what you are seeing today. Also being the first born in a family of seven constantly put me on my toes because it is a responsibility that makes me stand out in the family, having my siblings looking up to me, leaning from me also made me to be more serious and hard working.”

It has been 11 years since she embraced the limelight and five year ago got recognition when she became a beauty queen, her staying power she said is determination and consistency. “Since I came into the limelight, it has not been easy but I needed to keep pushing because my fans are expecting more from me. So far, I have been consistent in my charity work every year planning on setting up an NGO soon and dropping songs.”

Cynthia can be described as a jack of all trade but master of all. As a singer, she is beginning to make a name, as an artist, she is making a living and as an actress, she has acted alongside big names in Nollywood movies like Amara rice and beans, Ikemba, Scorned, The Outrage and so on.

“It was a good experience and learnt from the tutelage of veterans. Working with them discovered they guide you to be a better actress or better actor. I enjoyed acting with big names such Olu Jacobs, Mercy Johnson, Mike Ezuruonye, Rachael Okonkwo, Chunks Chyke, Mary Uche, Dexter Nwanya, etc.,” she explained.

From being a beauty queen, to the arts: painting, acting and now singing, Cynthia admits that her foray in theatre arts which was accidental unearthed her self-discovery, saying: “Studying theatre arts was a blessing in disguise because studying Theatre Arts was far from my career choice. I wanted to be a lawyer but admission issues made me go for theatre arts and it was the best decision I took because it brought the best out of me. Theatre arts made every good thing you see today happen. It sure influenced me.”

Apart from the big guns in the Nollywood whom she looks up to for career guidance, Cynthia has a role model in her mother, Tiwa Savage, Beyoncé, and Ciara.

Talking about the new single she dropped for Big Brother Naija, she said: “It was an idea that came last year so I decided to fix it believing it will give my music career more success since big brother is a big name and franchise. The idea behind the song is me appreciating big brother for the impact they are making the lives of some youths. Apart from transformation in the life of Efe, Bisola, Miracle10, Alex and Nina, sit is entertaining.

“It is a show that raises people from nothing to becoming heroes. I feel this is my own way of acknowledging them. For instance, this year’s audition thousands of graduates came out just to make it to the show due to lack of jobs. In all just 20 contestants were picked so it is worth praising them.”

Another cash cow for Cynthia is the visual painting which she said started in secondary school.

She explained: “I was good in drawing and painting in secondary school but didn’t continue with that after secondary school so last year August, the urge to draw came like a fire so I took a bold step because it’s something on my own I knew I could do very well so I got few materials and my first drawing was been appreciated by a lot of people, I had to keep doing the work and today I get commissioned works and art piece yet to be displayed.”

Life is not a roller-coaster as Cynthia very well understands, particularly in the entertainment industry where female actresses are often faced with many challenges.

“One is faced with a lot of challenges everyday but I see it as a process in the making. In business, we plan it to grow and in the industry too I want to grow. But in all of this you have to meet the right people to reduce the challenge. A lot give up in the process. But if you believe, you will hit stardom. For me, I have combined acting with singing. It has not been easy but having adopted acting as a part-time it gives me time for my music,” the beauty said.

Has she ever experienced sex for role which is often mentioned in Nollywood? Does she think it exists? And if yes how does she think actresses or actors can change the narratives?

Cynthia responded: “For sure! Sex-for-roles do exist and it’s very high now. I had same similar issues where I got to location after a role was given to me and script sent. I got to the location and the director asked me to have sex with him if not some else would play the role.

“I told him that I will never do that for acting that I spent years to study so I decided to leave acting. I now made it a part- time job. Fine challenges would always come and it will always be there but if you believe in yourself and if you know you are good, jobs will always come. But if you are desperate, you will fall prey.”

How does she ward off male admirers? “It is simple,” she said, “I just tell them that I’m not ready for games and I have a man.”

Though Cynthia regrets not starting her music career professionally when she was an undergraduate, all hope is not lost as 2019 unfolds the singer sees herself moving up the ladder, courting more fans, improving on her philanthropy works and becoming a movie producer.

“I am not going to rest as my ambition is to become an international act in my music and visual art. I have no fear because I believe anything can be achieved if one is determined and work hard on it,” she stated.