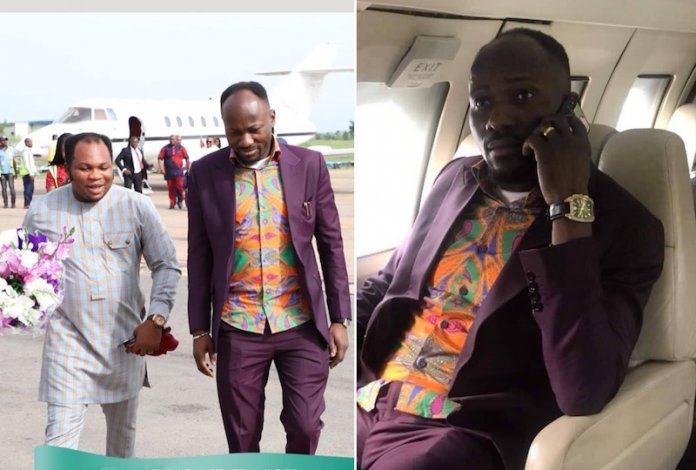 It is one thing for men of God to preach against the ostentatious lifestyle. It is quite another for them to walk the talk. For some, the treasures being laid up in heaven can as well be supplemented by shiny new toys in this world.

The popular senior pastor and general overseer of Omega Fire Ministries International, Apostle Suleiman Johnson, has joined the exclusive club of powerful General Overseers who can boast of travelling in their very own private jets.

Not a few weeks after shooting passionate darts from the pulpit against the opulent lifestyle, the controversial televangelist and online sensation has taken delivery of a Hawker BAe 125-800 reportedly costing in the $1-3 million bracket. A viral video displays the handsome pastor proudly seated in the aircraft while a companion administers prayers.

The Muslim-turned-Christian firebrand is never shy to speak his mind on issues affecting the country. He has at various times confronted people in power and is no stranger to making controversial comments that put him on a collision course with powerful individuals.

However, with this feat of buying a private jet, the husband of Reverend Lizzy Johnson has been officially admitted to the league

of jetsetter men of God who make use of their private aircraft to tour the globe, whether on official ministrations or for reasons of a rather more pleasurable kind.

The General Overseer of the Redeemed Christian Church of God, Pastor Enoch Adeboye, the founder and presiding Bishop of Faith Tabernacle, David Oyedepo, Senior Pastor of Word of Life Bible Church, Ayo Oritsejafor, and Senior Pastor of Daystar Christian Centre, Sam Adeyemi are others who boast of at least one private jet in the fleet of luxury shutters that convey them from place to place.

Apostle Suleiman founded Omega Fire Ministries in 2004 which has rapidly grown to become a mega church to be reckoned with. He leverages the viral nature of social media to disseminate his messages to all corners of the globe. Celebration TV, founded by the church, and Voice of Fire Radio, are used to do much the same to the same for those watching at home or listening on the radio.