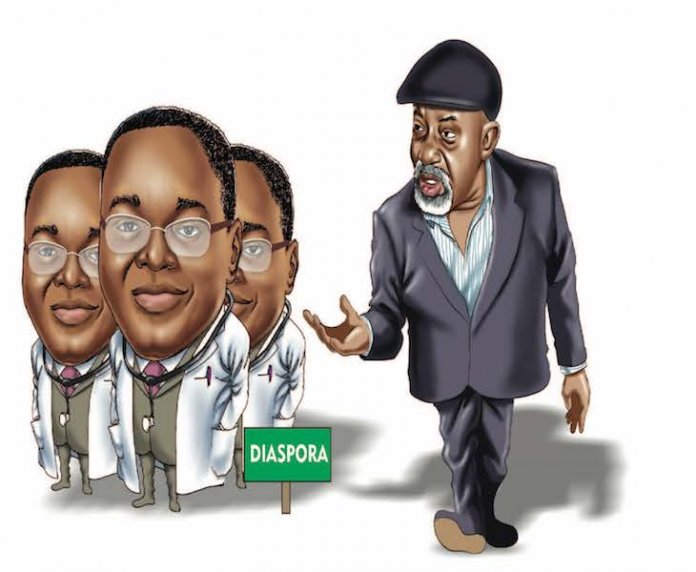 Following public outrage, the Minister of Labour, Dr Chris Ngige has walked back on his dismissive statement that the rate at which Nigerian doctors emigrate is a positive development for the country. “We have a surplus…If you have a surplus, you export…They (doctors) go out, sharpen their skills, earn money and send them back home here. We have foreign exchange earnings from them. Indians are doing it,” Ngige had said while responding to a question on Channels Television last week. But the claim flies in the face of available statistics from the World Health Organisation (WHO) and United Nations Children’s Fund (UNICEF).

It is therefore not surprising that both the Nigerian Medical Association (NMA) and National Association of Resident Doctors (NARD) have dismissed Ngige’s statement as a piece of political theatre. “For optimal healthcare to be achieved, according to WHO, we need doctor/patient ratio of one to 600. In Nigeria, we have 40,000 doctors taking care of 200 million people,” said NMA president, Dr Adedayo Faduyile. NARD president, Dr. Olusegun Olaopa, added: “We have the maternal mortality that is about the highest in the world. To correct it, we need health professionals around. The doctors we are losing are not fresh doctors but specialists. That means that Nigeria will continue to battle with shortage of specialist doctors.”

The consequence of this state of affair in the health sector is that several Nigerians now habitually fly to India and other countries to obtain what they consider quality health services at a very huge cost to our economy. On Thursday, President Muhammadu Buhari left for the United Kingdom on a ‘private visit’ that many have interpreted to mean he is going to see his doctors. Sadly, due to both a lack of job fulfilment and inadequate remunerations at home, Nigerian medical practitioners are leaving the country in droves for Canada, United Kingdom, Saudi Arabia, Kuwait and other Asian, European and American countries where their services are required and the reward systems are better. This latest form of brain drain, which Ngige believes is a positive development, poses huge challenge to our beleaguered health sector and should worry the authorities in our country.

Meanwhile, the frequent face-off between doctors and the government has not only left an indelible stain on the image of the public health care system in Nigeria but has also brought untold hardship, deprivation, humiliation and frustration to the embattled medical doctors, their wives, children and relatives. It is therefore no surprise that many of our medical doctors have resorted to fleeing Nigeria in search of greener pastures abroad.

In rationalising his statement, Ngige said Nigeria at present does not have enough health facilities to “accommodate all the doctors seeking to do tertiary specialist training (residency) in the teaching hospitals, federal medical centres and few accredited state and private specialist centres in the country.” But who do we hold accountable for that?
What makes Ngige’s statement particularly noteworthy is that under a plan by the current administration to bring healthcare to about 60 million vulnerable Nigerians within two years, the federal government last year proposed building 10,000 health centres in the 774 local government areas in the country.

According to the Minister of Health, Professor Isaac Adewole, the initiative was aimed at reducing referrals of primary diseases to tertiary health institutions by 70 per cent. The question now is: if those hospitals were built, where would the federal government get the medical doctors to man them since the idea is to train our medical personnel so they can go and earn foreign exchange abroad?