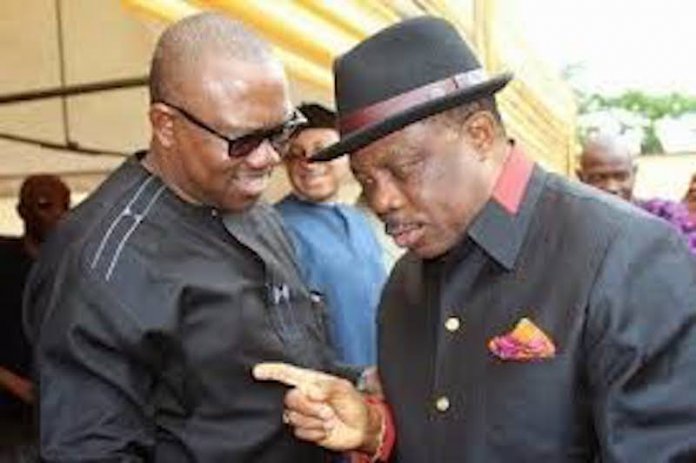 Again, ahead of Anambra State’s forthcoming governorship election, the issue of zoning is gradually creeping into the political discourse of the state, especially among the political elite, whom some political monitors say always use it to achieve “self-seeking political interest.”

Already, there is an on-going but stubborn argument by some invested political interests that it is the turn of the Anambra South to produce the next governor of the state in line with the purported zoning arrangement, which the promoters said was planted by former governor of the state, Peter Obi, when he was leaving office in 2011. The political discourse is currently generating heated debate among political stakeholders in the state.

Recently, the deputy presidential candidate of the Peoples Democratic Party (PDP) in the just concluded general election, Obi, was forced to deny the issue of zoning attributed to him.
In a press statement signed by his spokesman, Mr. Valentine Obienyem, the former governor of the state denied the insinuations that he introduced zoning into the politics of the state in 2011.

Acknowledging that he insisted the governorship should go to Anambra North, against the position of his then party, – the All Progressives Grand Alliance (APGA) – Obi explained that it was in the “spirit of justice and equity” that he insisted the governorship candidate should go to Anambra North since they were at that time, the only zone yet to produce a governor.
Obi said his position was ‘equitable’, and not to be confused with “entrenchment of rotation in Anambra’s Charter of Equity” or whatever it is.
According to him, “If at any time the state wants rotation or any form of political arrangement, it would not be the imposition of one man because, if allowed to stand, history may interpret such as a predisposition of Obi to autocracy. In a democracy, decisions are by consensus and not a one-man-show”, the statement added.

The statement also condemned the reference to Obi by some elements, whenever ‘divisive issues’ come up, saying, “If they are looking for noble actions of Obi to commend and emulate, they are legion. They should start by imbibing his spirit of hard work and resourcefulness that made Anambra a reference point during his tenure.”
In line with the former governor’s current position, many political stakeholders in the state hold the same view that zoning discourse had outlived its usefulness in the state’s governorship contest, because each zones had at different times, produced governors in the state.

The resounding argument appears to be that what matters in the next governorship election are the credibility and sound credentials of the candidates – those who can deliver on good governance.
“Zoning was to correct an imbalance and it was an APGA’s thing. We cannot use it to perpetuate undesirable or ineligible candidates, based on zoning. Governor Willie Obiano is a typical example why zoning is not needed in Anambra State”, a political analyst, Chief Obi Dee Okoye, stated recently.
Another political commentator, Ikuku Amanoya, added, “Why is it that my Anambra South is singing zoning as if we cannot beat any candidate from any part of the state without such argument?
“All zones have taken their own share of the governorship slot, including the South. This is the best time to bury zoning. If any candidate takes the seat on the basis of zoning, it would take another 25 years to stop zoning.”

While the controversy continues, the argument that seems to be resonating with many people in the state is that for a state that has produced first class intellectuals and political players in the country like the late Dr. Nnamdi Azikiwe, Dr. Alex Ekweme, Professor Chinua Achiebe, Dr. Chuba Okadigbo, Emeka Odumegu Ojukwu, Professor ABC Nwosu and others, zoning will continue to promote mediocrity in the politics of the state as it has been witnessed in the past few years.

Describing the political culture of some of the elite in the state as ‘disruptive’, a political scholar, Dr Okey Nnamdi said the unfolding political events in the state should not surprise anyone.
He argued that with the 21 local government councils of the state equally spread across the three senatorial districts: Anambra South, Anambra Central and Anambra North of the state, and each of them with seven local councils, there is no sameness in their political behaviours.
To be sure, what is described as ‘inconsistency’ in the political conduct among the population of the state may be expounded by the political actors, who held power at various intervals, right from the Second Republic till date.

For example, in the Second Republic, while Dr. Azikiwe, who was the presidential candidate of the defunct Nigeria Peoples Party (NPP), hailed from Onitsha, in the present Anambra North Senatorial zone, the National Party of Nigeria (NPN) presidential running mate, who later became the Vice President, Dr. Ekwueme, hailed from Oko, in the present Anambra South senatorial district.
Following this, while the state chairman of NPP hailed from Ozubulu, in Anambra South, the then Presidential Adviser (Political Matters), Dr. Okadigbo, was from Ogbunike, in the present Anambra North. And when the Ikemba, Odumegwu Ojukwu, returned from exile and joined the then ruling NPN, he lost the Anambra South senatorial seat to Dr. Edwin Onwudiwe of NPP, from Ogbunike, in Oyi Local Government Council of present day Anambra North.

Political analysts had also argued that when Anambra State was created in 1991, the struggle for political power in the state had always between the “conservative Anambra South Senatorial zone and its liberal democratic Anambra Central counterpart, much to the near exclusion of Anambra North, with its insular politics.”
The argument is that those who talk about zoning today in the governorship of the state may not know the lop-sidedness of the political exposure among the different zones of the state in the past.
Those familiar with the tempestuous politics of the state, said that Okey Odunze from Oyi Local Council, was close to becoming the state governor on the platform of the defunct Social Democratic Party (SDP), but for baffling political bluffing, Odunze was succeeded by Dr. Chukwuemeka Ezeife, a retired federal permanent secretary.
When Ezeife finally picked the SDP ticket, prominent players in the party, including the late Okadigbo, rallied Anambra North to accept the position of running mate, handed over to Chudi Nwike from Ogbunike, a neighbouring town to Odunze’s Umunya.

Ezeife and Nwike later won the governorship election, but that administration did not last following the termination of the democratic experiment in 1993. This is the kind of political contention that has supervened between Anambra South and its North senatorial counterpart in the past.
Thus, when the country returned to civil rule in 1999, the political domination of Anambra South, again, played out, apparently on the account that the zone could boasts of more politicians with deep pockets. Yes, sponsored by influential business tycoons, principally the multi-millionaire oil magnate, Dr. A. B. C. Orjiako, a little known Onitsha-based legal practitioner, Dr. Chinwoke Mbadinuju, emerged the governorship candidate of the PDP and eventually won the election.

When Mbadinuju was denied a second term in office in 2003, the political power mongers in the state replaced him with Dr. Chris Ngige.
But Ngige was to sooner than later, fall out of favour with those who invested in his election on account of his purported decision to renege on the ‘sharing understanding’. They went for his jugular and removed him by releasing sensitive documents, showing the electoral fraud that robbed the APGA of its deserved victory.
And it ensued that Ngige of PDP and the APGA’s challenger, Obi, were both from Anambra Central Senatorial district. But before Ngige was dismissed over the disputed mandate, the Alor-born medical Doctor had occupied the seat of governor for three years.

It happened that at the tail of his eight years in office, Governor Obi looked towards the Anambra North Senatorial and favoured the zone in order to “bring about equity, fairness and stability.”
But, as some vested political interests continue to whip up zoning for obvious “selfish political interests”, observers are pondering the guarantee that all the political parties would abide by the zoning, supposing it was necessary? And, again, what could be the influence of a possible emergence of a candidate from Anambra central on the current play of forces between the Anambra South and Anambra North?
This is why the idea of zoning may not be what any of the actors want to touch for now even though everyone wants the next governor to emerge from their part of the state.