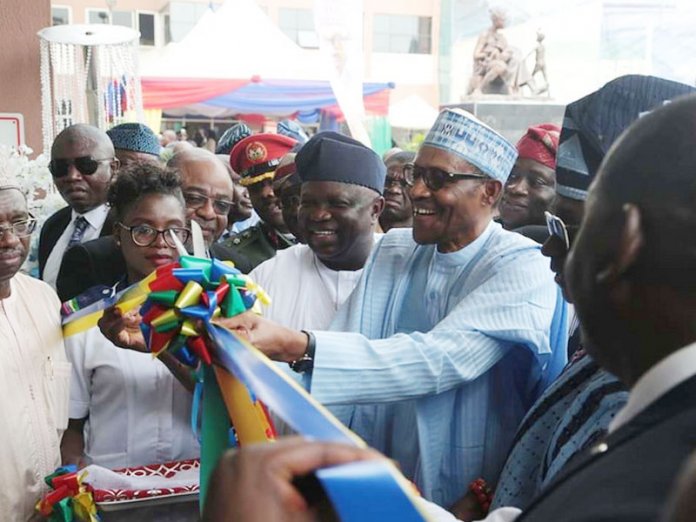 He also inaugurated a 500-seater theatre in Oregun, Ikeja, the state capital, to enhance entertainment and the social lives of Lagos residents.

While inaugurating the projects, Buhari said Ambode, who was denied the opportunity of re-election by his party, the All Progressives Congress (APC) in Lagos State earlier in the year, deserve commendation for his laudable contributions to the growth and development of the state.

“Your governor, Akinwunmi Ambode, has performed satisfactorily and we should all commend him for his contributions to the growth and development of Lagos State,” Buhari said, adding: “I want to once again thank all the people of Lagos State for their support for our government and our party.”

The president had arrived the Presidential Wing of the Murtala Muhammed International Airport yesterday at 10:30am aboard the Nigeria Air Force 001 and was received by Ambode, four other governors of the South-west and some ministers.

Buhari said the projects were reflections of the drive and goals of the APC administration to pursue programmes and policies aimed at positively impacting the lives of the citizenry.

According to him, the projects were demonstrations of the necessity to sustain the provision of programmes designed to foster the development of infrastructure and simultaneously create the platforms for job creation.

Noting that the projects would change the face of public transport, Buhari also said the 820 buses he inaugurated would provide comfort for the people of Lagos State in a more efficient manner, pointing out that execution of the projects was in line with the goal of the federal government to improve infrastructure development in the country especially in the transport sector.

While listing other projects under execution by the federal government, the president thanked the people of Lagos State for the support given to him at the February 23 presidential election.

He said: “I am delighted to be here today to inaugurate three key projects that reflect the drive and success of our administration as we pursue policies and programmes that will positively impact on our citizens.

“The new Oshodi Transport Interchange; the Mass Transit Medium and High capacity public buses and the reconstructed Murtala Muhammed International Airport Road by Lagos State Government clearly demonstrate the need to continue to provide high impact projects for the development of infrastructure and opportunities for job creation at all levels.

“Just as this transport interchange with three different terminals is going to change the face of public transportation, the mass transit buses totaling 820 will move the people of Lagos State in a more comfortable and more efficient manner.”

In his remarks in Oshodi, Ambode, who said the projects being inaugurated were designed to upgrade the living standard of the people of Lagos State, added that while the health institute would boost health and education at LASUTH, Oshodi interchange would elevate infrastructure and commerce status of both the state and the country in general.

“There is no doubt that the future prosperity of this state is secure,” he said.

Describing the projects as the modest contributions of his government to the development of Nigeria, Ambode disclosed that the release of Paris Club refund by the federal government as well as the refund of some money earlier used by the state to execute federal projects contributed a long way to the success of their execution.

The Oshodi Transport Interchange initiative is a notable transformation of Oshodi, a hitherto dirty and disorganised setting in Lagos, “into a world-class Central Business District where business will now be conducted in a serene, clean, orderly and hygienic environment that can be compared to other transport terminals across the globe.”

The interchange conceived to be a conglomerate of the tripod of transportation, security and urban renewal and environmental regeneration, will transform all city and inter-state parks into three multi-storey bus park and terminals made up of four floors with each terminal designed to meet both parking and passengers’ demand.

The composition of the interchange includes: Terminal One, located on the former Mosafejo Market ground, will serve as the centre for inter-state transport activities, while Terminal Two, which used to be the location for Owonofari Market, and Terminal Three, sited adjacent to National Administration for Food, Drugs and Control (NAFDAC) office are designed for intra-city transport activities.

With thousands of buses expected to load in the terminal daily, between 600,000 and one million commuters are expected to pass through the exchange every day.

Buhari also inaugurated 820 buses of high and medium capacity under the auspices of Bus Reform Programme of the Lagos State Government.

The programme will be managed by Lagos Bus Services Limited in partnership with bus operating companies which had the mandate “to upscale the number of buses to 5,000 over three years.”

The project, viewed as a critical and timely intervention by the Lagos State Government in the health sector, was described as Nigeria’s biggest maternity hospital, upgraded by Ambode’s government from the hitherto 80-bed facility to a 170-bed healthcare centre and equipped with the state-of-the-art medical equipment and information technology services.

Speaking at the event, Ambode, who described the development as historic, expressed optimism that the facility would provide world class child-birth and maternal care services to Lagosians and Nigerians at large.

According to a statement by his Chief Press Secretary, Mr. Habib Aruna, Ambode recalled how the journey began, saying the facility was initially donated exactly 29 years ago by the late businessman and philanthropist, Sir Mobolaji Bank-Anthony.

According to him, Bank-Anthony donated the first dedicated maternal and child care facility to the Lagos State Government, in memory of his mother and, therefore, christened it “Ayinke House.”

According to him, the hospital, which started with just one surgical theatre, soon assumed a life of its own as a first-class child-birth and maternal care centre in the health sector of Nigeria as well as the first choice for expectant mothers.

Aruna also said the governor disclosed that the hospital later became over-stretched beyond capacity and somehow obsolete, adding that in his government’s bid to sustain Bank-Anthony’s philanthropy, the administration of former Governor Babatunde Fashola, awarded the contract for the expansion and reconstruction of the facility.

He said:“Today, seven years after the closure of the facility, the new edifice is now a 170-bed facility with five surgical theatres. It has 16-bed emergency care units with the organ support facilities, 30-bed special baby care unit, five neo-natal intensive care units, a fully equipped laboratory with support services, laboratories and a blood bank.

“Beyond the significance for the health sector, this institute is a major contribution to our education sector also; as it becomes a veritable platform for our medical students in the state university to enhance their exposure and experience, with the top-class medical equipment provided.”

The president also inaugurarted the Oshodi- International Airport Road which is a transformation of the hitherto-four-lane road to a ten-lane highway with two flyover bridges and five pedestrian bridges.

The reconstruction has put paid to the hitherto acute traffic gridlock that was prevalent on the road, causing huge pains for passengers going to catch flights at the international airport.
The president also inaugurated a 500-seater Lagos Theatre in Oregun, Ikeja.

The theatre was described as an ultra-modern edifice and one of the four theatres simultaneously constructed by the Ambode administration to promote interest in arts and create standard platforms for talented citizens of the state to showcase their skills.

Ambode said three other theatres of the same specifications are also ready for inauguration in Igando, Badagry and Epe areas of the state.