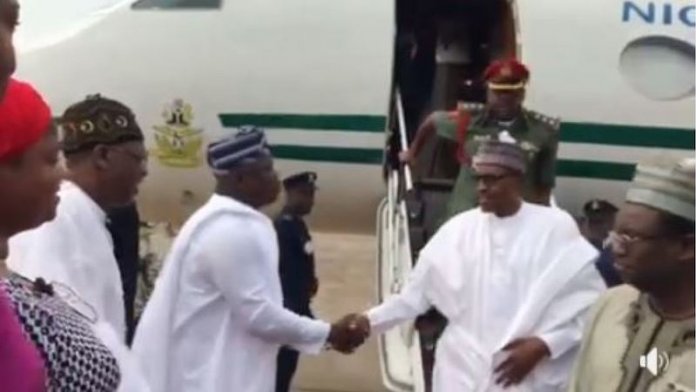 The Commissioner for Information and Strategy, Mr. Kehinde Bamigbetan who made the disclosure in a statement he issued yesterday, also announced vehicular restriction in Kodesho Road, Obafemi Awolowo Way and Kudirat Abiola Way, among others.

The statement added that other routes to be affected “are Mobolaji Bank-Anthony Way (coming from the Presidential Wing of Murtala Muhammed Airport to LASUTH under-bridge), and Ikorodu Road (between the Ojota Intersection and Anthony Interchange)

“Also, to be affected are Oworonshoki-Apapa Expressway (between Anthony and Oshodi Transport Interchange), and International Airport road through the local wing to Mobolaji Bank-Anthony Way and back to the Obafemi Awolowo Way.

“All the roads highlighted above shall only be cordoned-off when necessary; Obafemi Awolowo Way and portions of Mobolaji Bank-Anthony shall be closed to traffic on three occasions within the specified period, as they are central to the president’s itinerary,’’ the statement added.

The statement said the presidential visit would “hold between 9.00 a.m. and 3.00 p.m. during which traffic on some routes will be diverted in order to ensure a free flow of traffic.”

Constructed purely by an indigenous construction firm, Planet Project Limited under the leadership of Mr. Biodun Otunola, the transport interchange was a people-oriented project that would help at least one million residents commute easily daily.

It said Oshodi “has over 100,000 passengers and 1 million pedestrians daily, with 76 per cent of its land area dedicated to transport and related activities. This leads to serious traffic congestion and other environmental issues.

“Our concept seeks to transform Oshodi into a world-class Central Business District (CBD) with business, travel and leisure activities conducted in a serene, secure, clean, orderly and hygienic environment, comparable with other transport terminals around the world including Stratford and Victoria Bus Station in the United Kingdom.”

According to the statement, other components of the terminal include 20 lifts and escalators, two sky-walks connecting the terminals to each other, Architectural LED Lights, passenger concourse, public address systems, bus depot, passenger drop-off areas, taxi and car parks, passenger lounge for intercity commuters, loading bays, passenger information systems, among others.