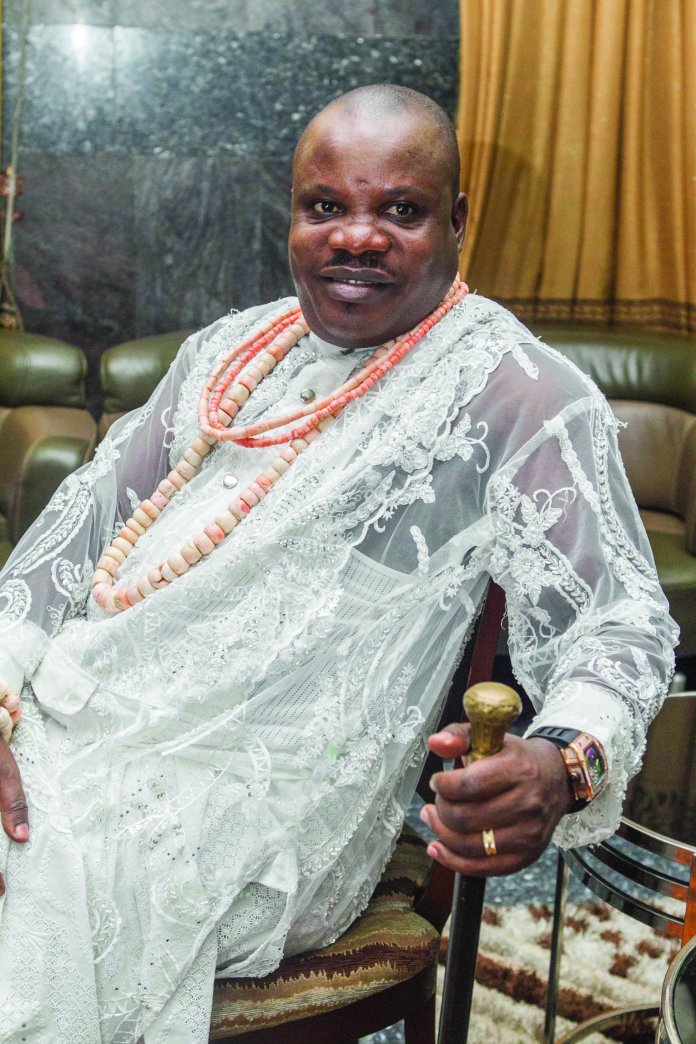 The Ibe-Uyadonwei of Gbaramatu Kingdom, Chief Dennis Brutus Otuaro is one person who is very passionate about the Niger Delta struggles and development. Chief Otuaro who is in his 40’s was a member of the Presidential Committee on Environment for the Restoration of the environment of the Niger Delta during the government of late President Umaru Yar’Adua. Currently a PhD student at the University of Benin (UNIBEN), Chief Otuaro, who describes himself as a development activist, believes one’s life should be all about service to one’s fatherland. In this interview with select journalists, including Olaoluwakitan Babatunde, Otuaro talks extensively about the pollution and environmental challenges of the Niger Delta region

You’re already a successful businessman. What propelled you to go back to school for a PhD?

I see the PhD as a something for self- fulfillment. After going to school, you need the PhD so that you can break new grounds in learning. Right now, I am working on a research on the Challenges of Researchers Objectivity on the Niger Delta Crisis. From my research at the PhD level, I have realised that the people have so many challenges; some border on education while others center on basic needs, even before oil was discovered at Oloibiri. The Winnick Commission Report of 1957/1958 made it clear that this area needed special attention but sadly after the country’s independence, that report was abandoned and the government of the day recommended the Niger Delta Development Basin which was an agency that was deliberately made not to work. Before the military intervention in our politics, there was derivation formula, enshrined in the Nigerian Constitution. But immediately after the military left the stage, the allocation concept was inserted into the new constitution. The concept of revenue allocation is alien; it is a criminal concept in operating the constitution of Nigeria.

As a father, you cannot allocate what your son has. When your son is wealthy, it is his duty to maintain you, it is not you as a father taking everything that belongs to your son, then you now give him 1.5 per cent, 13 per cent or whatever percentage. It is only here in Nigeria that the constitution is taking something from the state and then allocating it. Revenue Allocation is alien to federalism. For now, the 13 per cent is not even enough. The constitution says at least 13 per cent. But at the end of the day, We only need a policy will of the government to make it a policy statement or declaration about reviewing the 13 percent as the constitution does not stop any government from increasing the percentage beyond 13 per cent.

Much of the crises that erupted in the Niger Delta was also due to the alleged despicable acts of multinational oil companies which were inimical to the ecosystem. To the best of your knowledge, have things changed for the better?

As stakeholders, over the years, we have keenly observed and we have done our part bridging the gap between the communities and the government; bridging communication break down between the communities and the Oil Multi Nationals as well as the government. That was the role I played as Chief Protocol Officer; to let the youths to understand the project determination of the government had and the commitment towards development agenda of the government. But as of today, things are getting worse. The attitude of oil companies is even getting worse. There  are many cases of oil pollution that are deliberately blamed on host communities by the oil multi- nationals, may be in connivance with the government and security agencies, such that when a spill occurs, they will categorise it as sabotage. And in some of these investigations, the communities and the stakeholders are not even involved; only the oil companies and the security agents will go and do it on their own and categorise it with any name. At the end, it is the community and the environment that suffers. And you know in Nigeria, how it is with the culture of settlement.

If given the opportunity, what would you do differently?

I would engage stakeholders and make vital recommendations to address relevant issues facing the Niger Delta.  The people of the Niger Delta will be engaged meaningfully, because we already have basic documentation that are on ground in the archives that we can dust come up a good developmental blueprint to give short term, midterm and long term solutions; and not to be engaging stakeholders in marathon workshops and conferences that are not productive. It is time to make the youths, the women and the men of the Niger Delta productive.

When you go to the Niger Delta states, apart from the civil service, there is nothing generating employment; even the oil companies are not in the Niger Delta. You only see them in Abuja and Lagos and when those from the Niger Delta go for employment, it is always a problem as indigenes of where the companies are located are given preferential treatment. They are even under pressure from indigenes of those areas not to appoint Niger Delta sons and daughters. There is no industry in the region. Any amount of money you give to the people, they can hardly invest it there; the money will go out. That is why we must light up the Niger Delta, now that we’re talking about electricity; connect the region to the electricity and good road networks. So when the investors are coming, they will already know there are roads and it will open up the markets and make any investment accessible. Thereon the security challenge can now be easier to deal with. It will then become easier for the government or security agents to mobilise when there are security challenges;

All these are critical factors that probably led to militancy in the region which ultimately resulted in the Amnesty programme. How effective has the programme been in addressing these challenges?

What the past advisers of the amnesty program have succeeded in doing from the initial stage is disarmament, de-mobilisation, and now training is going on in some aspects. But the amnesty package that was given as at 2009 is more than that. So, anyone in charge of the Niger Delta amnesty programme should know that. How could these people have access to the resources in their region? It is one of the critical aspects of the amnesty programme that stakeholders and the governments still need to discuss. Under the programme, late President Yar’Adua, agreed on 10% equity stake for host communities in the petroleum sector as part of the amnesty deal. This 10% will be focused on long term development and investment for the region, so those are areas any special adviser in the amnesty and the minister for Niger Delta should be thinking when they convene for stakeholders meeting or advising the government to enable the people access their wealth. That is it and not just sending them to training and abandoning them without even determining the type of trade that is relevant in their respective localities. The NDDC has a serious role to play in even in the amnesty programme because when we’re talking about opening up the communities by road, the lighting up of the Niger Delta the Niger Delta ministry and the NDDC have a big role to play.

How effective or successful has the Amnesty programme of reintegrating the militants back into the civil society been?

For me, it is not effective but as for the training and other things they’re doing, they say they’re doing some things. If you say you’re reintegrating people, where are you reintegrating them into? You give them some starter pack for some trade that may not even be relevant to their locality. You’re not telling us that you’re reintegrating them means that you are resettling them from their local communities. At the end of giving someone starter pack, the way the programme is being done now, you’re sending them to go and start business in their communities. So when you are training them for projects, do you take cognizance of the viable trade in their domains? No. There are cases of misplaced priorities in the reintegration process. But those that went to school, I know for the students after graduation maybe 60% can survive on their own. As students, they can invest even if there are no jobs as is the Nigerian situation. For me, they should even focus more on the education aspect because the level of illiteracy is very high in the Niger Delta and not only in the north as they’re saying.

We have a high level of illiteracy. So, the Programme should focus more on education; and with respect to that they can also focus on the polytechnic and technical education aspects and not just formal university education. Some people will be ready to go to the polytechnic for two years and garner the capacity to understand any business they may want to do.

I don’t have any political ambition for now but my mission is to serve my country anytime the opportunity comes. I always tell my friends that the greatest endeavor is service to your fatherland.

What one fervent wish do you have for your country?

At the moment, my only appeal is to the political class. The elections have come and gone, so it’s time for them to heal the wounds and move on, especially to our President, whom I would implore to look very deep, refocus on the security architecture of the Niger Delta and carry critical stakeholders along, especially High Government Ekpemupolo (Tompolo) . He should not rely on the political leaders alone; they cannot give the all the needed solution. There are critical stakeholders that as a country can be reached out to in a bid to restore peace and restore security and engender development In the Niger Delta region; somebody like Tompolo I believe is very critical to peace in the region. Wherever he is, he remains critical as a serious stakeholder. He’s somebody that everybody respects. Majority of the people respect him. They know that he’s not a politician, and when you go to the Northwest, there are stakeholders like that as well. So in trying to solve the insecurity issues we face at the moment, the president should look for people like that and they will open the way for a good developmental strategy for the Niger Delta and other parts of the country in similar circumstances.