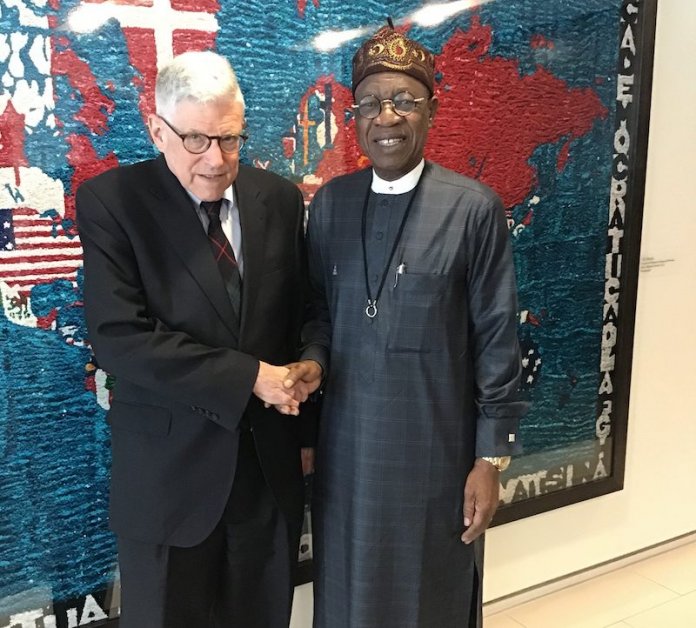 A former Political Counselor and US Ambassador to Nigeria, John Campbell, has expressed confidence in the administration of President Muhammadu Buhari to lead Nigeria out of its challenges.

Campbell made his position known when the Minister of Information and Culture Alhaji Lai Mohammed, paid a working visit to the Washington office of the Council on Foreign Relations.

Campbell is the senior fellow for Africa Policy Studies at the Council on Foreign Relations, a United States nonprofit think- tank, founded in 1921, that specialises in foreign policy and international affairs.

Speaking with newsmen after a closed door meeting with Campbell and his team, the minister said the encounter was “interesting, illuminating and rewarding’’.

Mohammed who was in Washington to engage international media and think-tank, promote and reiterate the successes of the Buhari’s administration said Campbell was very well informed about Nigeria.

“The encounter with Amb. Campbell was a very interesting one. Campbell was not just a former Ambassador to Nigeria he also was a Counselor to Nigeria and he had lived in Nigeria cumulatively for decades and very well informed about the country.

“What impressed me most was that he believed that the conflicts between farmers and herdsmen have nothing to do with ethnicity or religion.

“That is very interesting because even at that level, they see and agree with the government’s point of view.

“Campbell also came up with a lot of very useful suggestions which are based on his experiences and insights which cannot be discussed here,’’ he said.

The News Agency of Nigeria (NAN) reports that Campbell served twice in Nigeria, as political counselor from 1988 to 1990, and as ambassador from 2004 to 2007.

The minister who earlier granted exclusive interview to the Washington Post, a major American daily newspaper, said that the focus was “on the situation back home’’.

“We exchanged very frank views and I have the opportunity to let them know the success stories of the Buhari administration in the areas of tackling insecurity, corruption, reforming and revamping the economy,’’ he said.

The minister also said that his encounter with another U.S. based think-tank, Centre for Strategic and International Studies (CSIS) was also successful offering him the opportunity to correct some erroneous impressions about the last general elections.

“The encounter offered me the opportunity to disabuse the minds of some members of the agency, especially in the area of the last elections.

“They were of the view that the government was probably instrumental to the postponement of the elections.

“I have to explain to them that the country has a truly independent electoral body, the Independent Electoral Commission (INEC) and the government did not interfere in its programmes,’’ he said.

He added: “I told them that in 2015, INEC also delayed the elections and as a matter of fact for six weeks due largely to interference from the then government because INEC said they were ready for elections.

“This time around, the government had nothing to do with the postponement.

“I recall that the President was already in his country home and I also was in Kwara prepared for the elections and when we got the news of the postponement, we all felt very disappointed.

“I am glad that I had the opportunity to disabuse their minds.

“Two members of the Agency were actually foreign observers in the elections,’’ he said.

He said they also exchanged views on the issues of farmers/herdsmen clashes and he explained to them that it had nothing to do with ethnicity or religion.

Mohammed said that the CSIS shared the government’s position that the clashes were largely caused by environmental challenges and criminality, but the government had a lot of work to do to end the crises and convince the international community on the root causes.

NAN reports that the minister’s trip to Washington ends today as he will be moving to London for the same working visit to media houses and think-tanks.

Assessing the Washington visit, Mohammed said he had unquantifiable take homes that would benefit the government and the people.

“I cannot put a value on it because during this visit to Washington, we have done interviews with three major media organisations, Aljazeera, Washington Post and the Voice of America.

“We have also met with about five think-tanks which offered their useful advices. As a matter of fact, the trip was worth it,’’ he said.

NAN reports that while in London, the minister is scheduled to engage international media including the BBC and UK based think-tanks, to promote and reiterate the successes of the Buhari’s administration. (NAN)