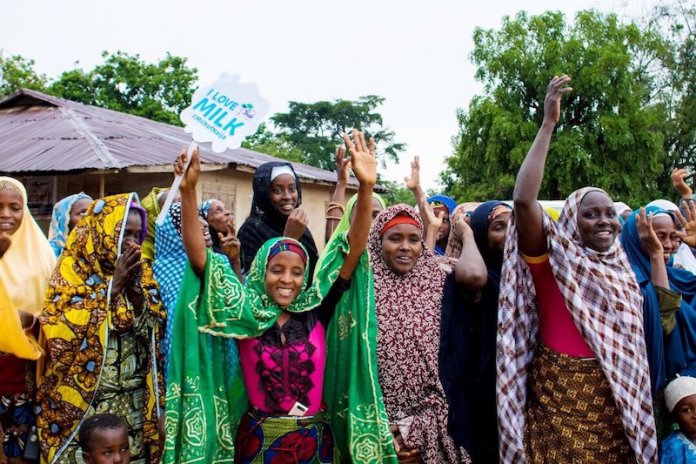 Jonathan Eze writes that for the 3,500 diary farmers, particularly the 900 rural women in Oyo State, where FrieslandCampina WAMCO operates its Dairy Development Programme, it’s been testimonies as the scheme has increased transactional activities and improved family lifestyles in the milk producing communities

Nigeria’s dairy sector is still largely evolving and unable to cope with the dairy needs of the country’s population of over 1milk80 million. There are key players in the sector who sell milk and other dairy products to Nigerian consumers, but only one multinational company has demonstrated total commitment to developing the sector, thus blazing a trail that others may follow.

When FrieslandCampina WAMCO, began its multi-billion naira Dairy Development Programme (DDP) in 2010, not many people in the dairy sector knew it was in it for the long haul, because similar efforts by others had failed in the past.

In just a few short years, the company’s commitment to growth and the development of Nigeria’s dairy sector has yielded encouraging results. Today, over 900 rural women in Oyo State, where FrieslandCampina WAMCO operates its successful scheme, have been sharing huge testimonies of how the DDP has improved their lives, living conditions and livelihood, amid the 3,500 dairy farmers who are benefitting from the scheme.

Hawawu and Umu Abdullahi are both wives and mothers. Before the DDP commenced in Iseyinland, Oyo State, they were both local cheese sellers without hygienic means of extending the shelf life of the cheese they both ate and sold for sustenance.

Smiling as they reflected on what had changed since the advent of WAMCO’s DDP, Hawawu told THISDAY: “My profit has improved. Every day after the cows are milked, we go and deliver the milk to the collection centres and the company (FrieslandCampina WAMCO) pays us money very promptly.”

In addition to the boost in her income, Hawawu, like many other women dairy farmers, testified to the immense social and lifestyle benefits that the DDP has brought their way. She said, “I now belong to a women forum they encouraged us to form and join where we learn and discuss things of great benefit to us as women. Before, things were very hard, but today, my life and that of my family is easier. I have even started an additional business of selling uncooked rice. I am happy”.

Umu Abdullahi’s testimony confirms that the DDP success in Oyo State has created numerous complimentary businesses, which have boosted the sights, sounds and socio-economic patterns of various communities significantly in the state.

She said: “I now have time to do other things as my family makes steady income from selling raw milk from our cows to the company. Also with more people coming to trade and live among us, this boosts our sales as we sell other things like foodstuff to the community and transporters.”

Both women like many others in the DDP communities use some portion of the milk supplied to the company to nourish their families. They could only drink milk in the morning because they had no means to preserve or process the fresh milk. They had to walk long distances to sell their ‘wara’ (local cheese) which they make from raw milk crudely preserved at home. But of course the meagre income from their ‘wara’ sales wasn’t commensurate to the effort they put into it.

Since 2010, FrieslandCampina WAMCO has been investing in the DDP and has established a large network of milk collection centres across the South-west of Nigeria.

The Dairy Development Programme provides sustainable livelihoods in over 90 farming communities where dairy farms have been made more effective. Since signing and renewing its Memorandum of Understanding with the Federal Ministry of Agriculture and Rural Development as well as the Oyo State Government, FrieslandCampina WAMCO also collaborates with the Dutch Government under the FDOV, IFDC-2SCALE and Sahel Capital.

Some of the major drawbacks for other dairy companies who may have been contemplating the local sourcing of raw milk would include huge financial outlay, long term investment turnaround period and related community development projects that every dairy investor must also engage in before the affected communities can embrace fully the business model that such an investor will establish.

Over the years, FrieslandCampina WAMCO alongside its partners has provided 50 solar-powered boreholes in the milk producing communities in Oyo State, completed over 200 hectares of pasture development, and trained over 3,500 dairy farmers/milk suppliers on various topics in modern dairy production.

According to Mr. Ben Langat, Managing Director, FrieslandCampina WAMCO, “Our Dairy Development Programme has supported four master farms where dairy projects are currently running and there are 16 more under development.

“The DDP has impacted over 100,000 people from raw milk supplies to the creation of job opportunities to host communities, for example – transporters, feed, veterinary supplies etc. This has engendered business development around the milk collection centres.”

The women were trained on entrepreneurial and leadership skills to increase their income and sources of livelihood. They were also trained on vocations like bead making, fabric designs and dress making.

WAMCO provided shops for members of these cooperatives to sell provisions and other items to members of their communities. These forward-looking women are also empowered to sell in these shops, milk products made from the raw milk they initially supplied to the milk collection centres.

Families living in these DDP-enhanced communities use the potable water provided by FrieslandCampina WAMCO for milking, domestic and personal hygiene like cooking, cleaning and drinking.

Some of these women have made significant socio-economic progress; a good number have built houses and moved out of the thatched huts they used to live in.

“This Dairy Development Programme (DDP) is the nucleus of the company’s CSR programmes. It transfers over 140 years of FrieslandCampina’s global expertise to Nigeria, bringing gold-standard Dutch farming practices to the nation.

According to Langat, “The DDP is the second chapter of our history and a new era for the dairy industry in Nigeria. Studies show that 95 per cent of farmers in Nigeria are nomadic and they face challenges such as lack of knowledge, poor infrastructure and low financing. The DDP stimulates local sourcing of raw milk and supports the Federal Government’s initiative of improving dairy farming.”

The DDP enables dairy farmers run their businesses optimally as well as raise the quality and quantity of their dairy production. This is done through knowledge-sharing, training courses and exchange programmes with a number of partners.

To further promote dairy development in Nigeria, FrieslandCampina WAMCO hosted Nigeria’s first Dairy Farmers’ Day in December 2017 with over 300 dairy farmers in attendance. The company is keen to institutionalise this event as a day of honour for dairy farmers, bringing together stakeholders from the public, private and academic sectors to develop and implement a long term and inclusive national development plan for the dairy sector in Nigeria.

The DDP has proven to be a successful business model that encourages grassroots economic development through milk production. It has increased transactional activities and improved family lifestyles in the milk producing communities.

Langat confirms that the model has helped his company to develop new capacities, policies and practices that benefit pastoralists, small-holder farmers and Nigeria’s dairy sector as a whole.

Other successes of the DDP include an increasing appreciation of women farmers as game changers in the community. In the DDP areas of Oyo State, the overall quality of raw milk supplies have improved with bacterial contamination reduced considerably. Farmers’ competencies have increased as a result of sustained trainings.

The DDP has grown new sources of income for rural women and they have direct control over this income. There is increased food security for rural families and dairy products have become more available and affordable for these women and their families in the milk producing communities.