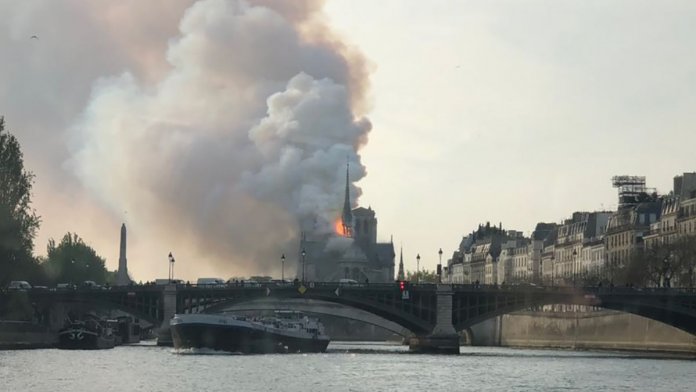 A massive fire broke out Monday afternoon at Notre Dame Cathedral in central Paris, sending flames shooting out of the roof of the iconic and historic building.

Smoke could be seen billowing from miles away and a concerned President Emmanuel Macron has postponed his planned address to the nation over his response to Yellow Vests protesters.

Fire officials told Agence France-Press that the fire in the biggest church in Paris was potentially linked to the renovation of the building and is believed to have started in the attic.

Dramatic images posted on social media showed the roof of the medieval cathedral engulfed in flames.

The Medieval cathedral is one of the main attractions of the French capital, seeing 12 million tourists a year.

The fire was the second to affect historic churches in Paris, following the one that engulfed the St. Sulpice church, built in the 19th Century. (NAN)

The Notre Dame was built between the 13th and 15th Century.

Renovation works have been underway on the cathedral’s roof that was partially covered in scaffolding, according to reports.