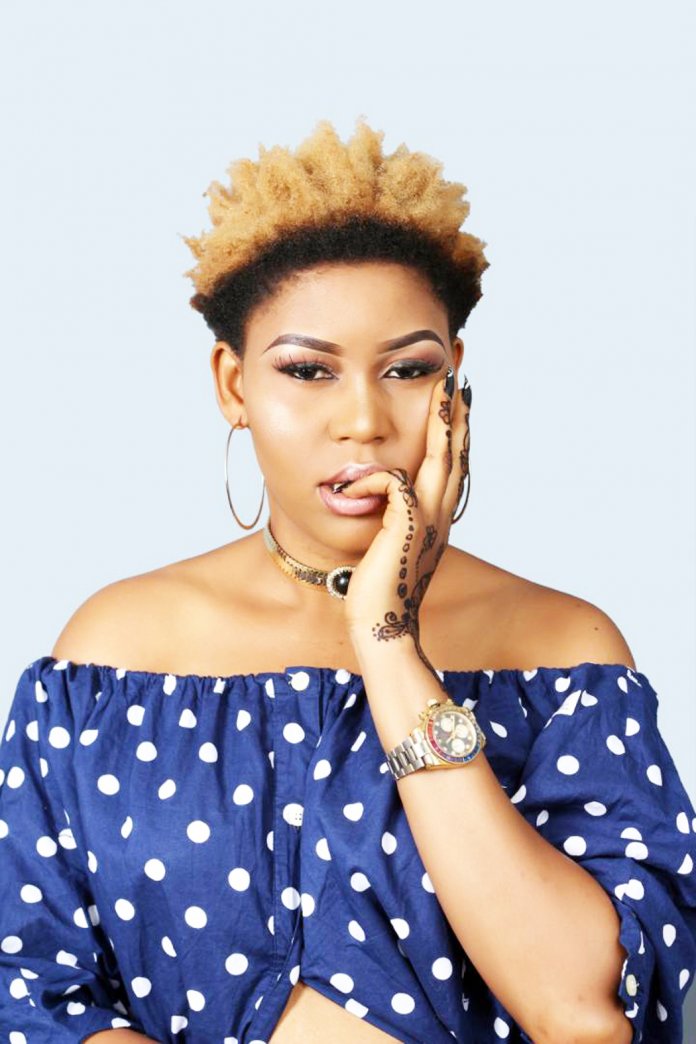 Winifred Okorie is a budding artiste and very passionate about doing music. With musical influences that cross continents in Nicki Minaj and Tiwa Savage, she started out first as a rapper before switching to her kind of music, which she describes as Afro with a touch of highlife. The Micro Biology graduate of Abia State Polytechnic, Aba, who simply goes by the stage name Wini talks to Ferdinand Ekechukwu about her style of music

The conversation had barely started when she cuts in. “Just hear this one,” she urged, looking determined to get her song heard. “I want to play the one I want to drop next,” she says. That would drop sometime this month. And then she plays from her Samsung mobile device one of her songs. She plays another one after that.  One could feel the melody. Not bad at all. She has dropped four singles already; the fifth one to follow is titled ‘Okoro’. She carries with her a couple of other songs. Some of the songs she titled ‘Nwoke mara nma’ (handsome man), ‘maka echi’ (for tomorrow), and ‘Oh My God’. She describes her genre of music as Afro and a touch of highlife. “It’s not really like afro-highlife just afro and a touch of highlife,” she adds.

Starting out as a rapper, her first three singles were rap songs before the other ones… She cuts in again. “And then I was thinking that I cannot sing; I was having doubt I cannot sing whenever I give it a thought. I was just doing rap that I wouldn’t have to stress my voice I wouldn’t have to bother myself. I was just doing it freely like comfortably. Along the line, my producer told me I can actually sing. I said okay I will love to give it a try. I will love to sing. He said I should try. I’m still working with him but I have some other producers. He’s a good producer (she expresses some level of confidence in his producer). So I did my first rap song…”

Winifred Okorie is very passionate about music. She quickly informs that she has a mini studio in her one room bedroom apartment somewhere on the mainland. The studio mention pricked my ears. Not often you see budding artistes own a studio. “Yes I have a studio,” she reaffirms. How rich is she to own a studio in her living space? She lets out a mild smile that says much of her confidence before responding. “You know the thing is when you know what you want and you know what you can do in order to support yourself. So I save up money to set up the instrument in my house so I can record at any time when the inspiration comes.”

Wini as she would prefer to be called started doing music in 2015 while in school. Not quite a long time though but her fervor overrides that. “I was in school; Abia State Polytechnic. So, I graduated 2015, moved down to Lagos 2016. I started doing small works, then I saved up money and I started doing the music stuff early 2017.” Back in school, like every Wednesdays in each week, there’s a meeting she always attend. “It’s for music talks and all that just the entertainment on the campus,” she recalls, her Igbo accent quite noticeable. “So, then there’s this music I recorded they were telling me to push it. It was nice though, that I should drop it. I said ‘no’, I don’t really want to start fully like coming out to the pavilion to perform and all that.

“I really don’t want it because I know I wouldn’t have chance for that because after lectures we go to the lab for practicals and I was still occupied. So I said let me pause music till after school.” Interesting thing about her, she doesn’t just sing, she also writes her songs. She explains further her journey. “Right from when I was little I have always had this passion for music; I love music so much. So, when I was seeking admission, my dad and mum…they were saying they want me to do medicine. In me I didn’t want to dispute whatever they say because I truly know what I want. I was telling them that medicine is too difficult; someone has to read and read,” she said repeatedly, emphasing her point.

Her mind was already made up for music. She didn’t think she will have the chance for medicine because even before she got admission, she had started writing music. Then when she listens to music she starts putting some words down different from the lines she heard. Then she had not in mind going to the studio. Eventually when she got admission, she was given Microbiology, which was quite a relief to her. While in school she was attending music activities at a time she had to stop because of her practical classes just so she can concentrate. Growing up listening to music, her musical influences were Nicki Minaj and Tiwa Savage. She says, “I listened to rap songs then the person that was really inspiring me was Nicki Minaj, I was listening to Nicki Minaj. So at a time I listened more of Tiwa Savage’s songs even now… yeah.”

Any side hustles or artistic work aside music? “I tried acting once but I don’t really like it; I don’t know why I don’t like it, I just see myself not liking it. My passion for music far outweighs acting you can’t compare.” She attributes her stay on the scene and how she gets events she performs at and her connection with other artistes to God. “The thing is when I go for shows after my performance I must get a connection to perform in another show in another place. That’s how it has been. If I perform here, I will get a contact to perform somewhere else. In every show I performed since I came to Lagos, God has been blessing me so much. Even if it’s not a direct show contact, it will lead to giving me show or event that’s basically how it’s been rolling.”

She continues. “The thing is you know how Lagos event is. They don’t really pay artistes, like upcoming, they don’t really pay artistes in Lagos here. Except you are really pushing yourself that far and they will call you they would want to support you, that to show appreciation, in one or two ways. But where I get paid is in the east when I go to shows in the East they pay me. Like throughout December I was in the East. I came back middle of January I was going for shows and all that I was paid.” Despite the difference in both markets, she feels comfortable being in the Lagos market because of the opportunity, she admits, is far bigger than every other place.

Yet she still appreciates her root; proud Igbo girl. “Of course,” she said laughing. . . I’m proud like that I don’t live a fake life I’m very real to the core and its paying me seriously. I can’t live a fake life because after living the fake life you will now go back and start afresh. It doesn’t pay. It is better I live real life and get to where I’m going sharp, sharp.” One teased her that probably when she gets there she would start living a fake life like some established acts do.  “I can’t fake o,” she insisted.

She appears very humble. She adds more to her story. “You know when I started even before I started going to studio I started associating with not really upcoming artistes but artistes that have already tried music before me. I was very loyal; I was very humble. I acted like I knew nothing musically. I was willing to learn and they taught me. As I was writing what I was doing, in the east it was good. But when I came to Lagos I listened to music and I went to the studio, I knew that I have to start afresh that I have not really done anything. It was a big challenge for me. So I had to put it on me that I have to work hard.”

Wini has got an interesting story and a music career that looks promising from her doings and her approach to singing like having a recording facility (a studio) in the house seems quite encouraging to a very good extent. But yet has got no plans for an album. Her reason being that “I wouldn’t want to waste songs because no label yet.” She has performed on same stage by chance with some other established artistes like Shaydee, Phyno, KCee, Mr. Raw, Skibbii, Rikardo Banks, Ice Prince, Niniola…”a lot” she says, trying to recall their names, and just then she mentioned “Papa Obesere”, her face lightens up.