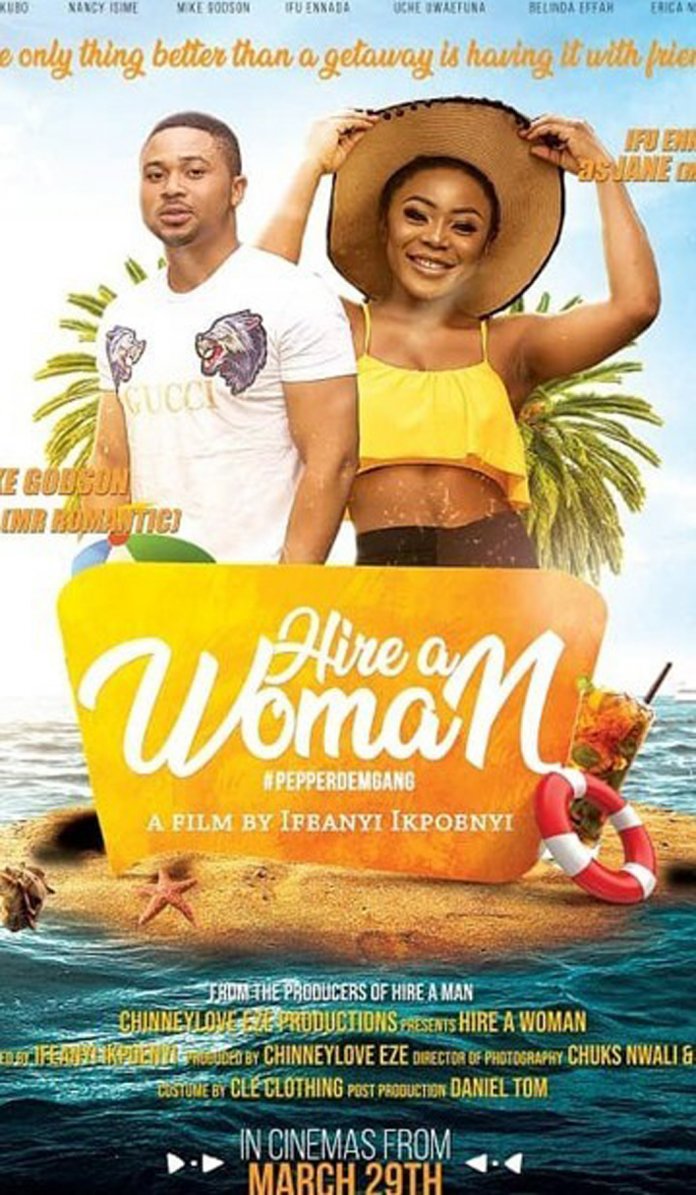 With the cast driven by good acting, new romantic comedy movie, Hire A Woman, by Chinneylove Eze rose to number one position at the box office among Nollywood films and number three in overall position which has Hollywood and Nollywood movies at the top five. Ferdinand Ekechukwu reports

Behind every great movie is a movie producer and a director at the background supervising and guiding the cast and crew in its creation, seeing the movie project through to its completion. Hence it is not surprising that since it hit cinemas on March 29, 2019 Nollywood movie, ‘Hire A Woman’ has earned tremendous buzz and acclaim. Just like its predecessor, ‘Hire A Man’. The new romantic comedy movie produced by Chinney Eze rose to number one position at the box office among Nollywood films and number three in overall position which has Hollywood and Nollywood movies at the top five.

Hire a Woman attained this position in just three days after release; second to Captain Marvel and US in the overall rating at the weekend box office in its first week down to its second week.

The movie tells a different story, plot and twists to deliver an eclectic feature film. In Hire A Man, a 29-year-old successful accountant does the hiring not to brag to her friends at school reunion or at the wedding of a mutual friend but hires him to show off to her family, that she has a man of her own just to save her face from her younger sister who is equally successful and engaged.

In a video chat made available online days before the movie release, Chinney revealed that, “Hire A Woman is a movie very special to my heart because filming it there was a lot of ups and down. But I know that all the time nothing good comes easy. Hire A Woman is a romantic comedy movie. . . It’s not sequel to Hire A Man; it’s a different story, different cast, though I brought back Nancy Isime. Hire A Man centres around family, Hire A Woman is centred around friendship.”

Shot in Whispering Palms Resort Badagry, Hire a Woman is about a guy who hired a girlfriend to get back at his ex at a picnic. Events turned things on their heads and quickly spiral out of his control and that of his female friends who plan the getaway. The 120 minutes feature Hire A Woman stars Belinda Effah, Mike Godson, Alexx Ekubo, Nancy Isime and former Big Brother Naija housemate Ifu Ennada who last minute replaced fellow ex housemate Bamike Olawunmi(Bam Bam). The cast sustain the film with good acting and Nancy Isime as it appears again proves she is a better actor than she is a presenter.

The producer, Chinney, made box office name as one of the youngest producer at 28 when her first movie registered as one of Nollywood sold out movies at N45 million gross earning with impressive runs in 2017. Now back at the box-office crushing numbers and cruising to number one, time will tell if she will repeat the feat.

Speaking, ChinneyLove Eze says the news of being number one Nollywood movie gladdens her heart. Before her first cinema movie Chinney had done ten films made for television.

Directed by Nollywood oldie Ifeanyi Ikpoenyi, Hire A Woman, like its precursor (Hire A Man), is the perfect relaxation film. Like the producer Chinney and the director Ikpoenyi, both practitioners share some things in common.

Ikpoenyi started out as an actor, and then became producer and transitted to a director. To his credit as a producer are memorable Nollywood movies like Evil Genius and Karishika. Formerly an actress who has been cast in over 12 movies, Chinney delved into movie production with her debut movie The Cartel (2012).The movie got massive buzz and bagged five nominations at ZAFAA awards as well as four nominations at the Best of Nollywood Awards.

Credited as one of the youngest producer to grace the Nigerian film industry, Chinneylove Eze as she is fondly known is also the producer of Maduka Daughters which marked the beginning of her journey in 2013; When Love Finds You, The Good Wife, Sister’s Quest, Devil in Red, Fast cash and a comedy film Okrika. This Anambra indigene is inspired by producers like Emem Isong, Kunle Afolayan and Uche Nancy. In 2018, she released a new romantic comedy, June. Prior to the release of Hire A Woman the actress and producer had a pre-release party where Nollywood superstars and celebrities dined and wined.