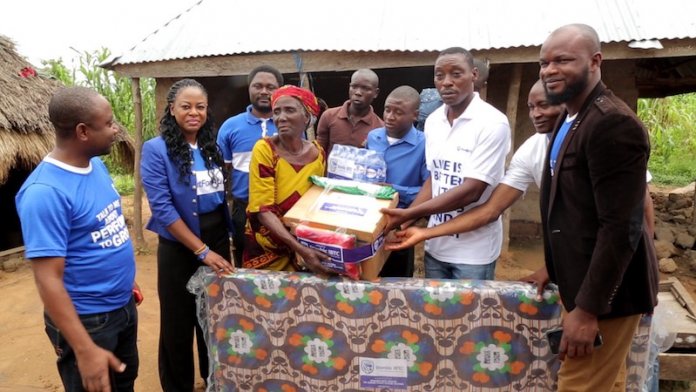 Rebecca Ejifoma writes that Stanbic IBTC has taken its corporate social responsibility drive a notch higher by providing impactful interventions for flood victims at relief camps in Jigawa, Katsina, Delta, Rivers and Ogun States, as well as transforming the lives of 20 indigent children who have suffered limb losses, among other initiatives

Global climate change affects countries differently. The negative consequences such as flooding are usually more pronounced in developing countries, where they create a source of major concern and challenge for governments most of which arealready saddled with problems ranging from infrastructure deficit, insufficient power, prevailing economic challenges, high rate of unemployment to mention but a few and are then faced with the responsibility of sheltering and rehabilitating thevictims amid funding constraints and a myriad of other factors.

Poor urban planning, population growth and poor regional cooperation in the use of natural resources such as rivers and lakes are also factors that contribute to incidences of flooding, for instance, in Nigeria.

The National Emergency Management Agency (NEMA) in 2018 had earmarked 12 states as frontline states to be affected by flooding in that year and by September 2018, a national disaster had been declared in the four worst affected states, while the others were flagged under red alert.

Flooding in Nigeria often leaves devastating consequences in its wake. NEMA in one of its reports in 2018 revealed that 327,052 people were directly affected in the 12 flooded states of which 77,460 were displaced. The number of houses destroyed amounted to 3,544 while 60,208 hectares of agricultural land was either destroyed or damaged. Sadly, there were 70 recorded cases of loss of life and 151 injuries.

Displaced individuals also faced a higher risk of contracting diseases such as malaria and cholera on account of living in makeshift/temporary shelters and poor water supply.

Along with the efforts of the federal and state governments, succour came to the victims of the 2018 floods in the form of support from notable corporate organisations, who responded as part of their corporate social responsibility initiatives.

One of such organisations was Stanbic IBTC Holdings, which made a timely intervention to ameliorate the plight of the flood victims. The institution donated relief materials to victims in five of the affected states namely Jigawa, Katsina, Delta, Rivers and Ogun States.

However, what is also commendable about Stanbic IBTC’s intervention is the manner and strategy adopted in ensuring that it’s donations comprised the most critical of relief materials for the respective states and that such items were delivered to the victims who were in dire need of them.

Upon selecting the states that would benefit from the relief materials, Stanbic IBTC immediately deployed staff on ground in these states/regions to conduct thorough impact assessments of the affected locations as well as living conditions in the relief shelters. Major considerations included; food, potable water, health/hygiene and comfort. The institution also identified and partnered relief agencies in the respective locations.

Therefore in meeting the need for potable water for instance, boreholes were provided in shelters for which potable water was lacking; a major boost to the prevention of water borne diseases such as cholera and diarrhea. In addition, ample supply of water also fosters the attainment and maintenance of better hygiene levels.

For the comfort of the victims, Stanbic IBTC provided mattresses with blankets and bed sheets, treated mosquito nets were also provided to prevent the scourge of malaria. The financial institutions also provided soaps and detergents among other essentials.

For the displaced victims, for many of whose sources of livelihoods had either been completely damaged or destroyed, adequate feeding was a major issue. For these non-perishable food items (in packets, tins, etc) were provided and distributed.

Indeed, Stanbic IBTC showed that it gleaned useful lessons from its earlier intervention in 2017 for flood victims in Benue State during which sundry items including mattresses and beddings; food items such as bags of rice and wheat flour, packaged noodles, vegetable oil, tomato paste; mosquito nets among other relief materials were donated.

Together for a Limb

Indeed for Stanbic IBTC, Corporate Social Investment is ingrained in its corporate philosophy and DNA, which is just as critical as adhering to the highest corporate governance principles. It is viewed as part of its business operations. This partly explains why its flagship CSI initiative, tagged Together for a limb checks all the boxes on novelty, innovativeness and multidimensional approach to transforming the lives of indigent children who have suffered limb loss(es). Beneficiaries are offered prostheses and educational trust funds of N1.5m each. They are thus provided quality education along with the improved quality of life that the prostheses provision engenders.

Stanbic IBTC goes further to bring attention to the plight of citizens with limb losses through an annual charity walk that is incorporated in its annual events calendar. In fact, the launch of the Together for a Limb initiative in December 2015 was preceded by the charity walk on November 14 of that same year and the charity walk has been held every year ever since, usually preceding the unveiling of beneficiaries for the year to further raise public awareness for the cause.

Accurate figures are not available of the number of Nigerians, especially children that are missing limbs however, since inception; Stanbic IBTC’s Together for a Limb has provided prostheses for 20 young Nigerians and has profoundly raised public awareness of this health problem through the charity walks and other associated initiatives.

Being an institution that is very keen on education, Stanbic IBTC CSI efforts on this sector are also very notable. For instance in Surulere, Lagos, the institution rehabilitated a group schools comprising Primary, Junior Secondary and Senior Secondary Schools, known now as Lagos Progressive Schools.

To improve the quality of education and conditions of learning in these schools, Stanbic IBTC renovated blocks of classrooms along with the library which was thereafter equipped with furniture, books and other study materials on relevant subjects,to complement the schools’ efforts and also promote a culture of reading. Also, staff of Stanbic IBTC regularly provide mentorship to students of the schools.

However the footprints of Stanbic IBTC CSI initiatives are nationwide as it continues to make donations and contributions towards improving quality and conditions of learning. Borehole and toilet facilities have been donated to several schools across Nigeria for instance. In addition, several students that are inclined towards the arts and crafts have also benefited by having their works exhibited during corporate events.

As its tagline, “Moving Forward” suggests, the organisation has a desire for a nation with prosperous citizens but also understands that beyond corporate CSI, a lot more mileage will also be covered by the active involvement of individuals. Therefore it has encouraged and actively promoted a staff volunteer scheme for all its employees.

Volunteering enables individuals to connect better with their communities to make them better places while offering a lot of benefits to the volunteers themselves. Expert opinions that outline the many benefits of volunteering are replete in health and business journals.

According to the Chief Executive, Stanbic IBTC Holdings, Mr.Yinka Sanni, the staff CSI and volunteer scheme has seen staff contribute and invest over N100 million towards various charitable courses that cover health, education and economic empowerment, which are the core CSI pillars of Stanbic IBTC.

Employees with similar interests are encouraged to form groups and raise funds to address respective causes that each group has identified with. Consequently, the staff volunteer scheme has donated classrooms, libraries, health facilities, boreholes and other social interventions over time across Nigeria.

The passion and benevolence of some staff groups created a memorable yuletide season in 2018 for several beneficiaries. In December 2018, the internal audit team commissioned a renovated dining room, fully furnished with brand new chairs, while also donating wheelchairs, overhead water storage tank with water treatment facility to the Special Children Centre at Ketu, Lagos. In the same spirit, the information technology team donated a water borehole facility to Farayibi Community in Bariga. The Finance team also made donations to Harvey Road Health Centre and the Ifako Ijaye General Hospital.

Prior to the bumper December, the operations team in Personal and Business Banking had in September 2018 donated renovated classrooms, newly constructed classrooms, sanitary facilities (toilets) and other projects at African Bethel Primary School, Ikorodu. And only recently on February 13, 2019, the card operations team commenced a volunteer mentorship program at Ilupeju Senior Secondary School.

Along with carrying out its core business operations, Stanbic IBTC has consistently promoted deliberate social investment programmes to improve the lot of individuals and communities across Nigeria. Its 360 approach which has birthed the employee volunteer scheme is further extending the frontiers of and giving a new meaning to CSI in Nigeria.