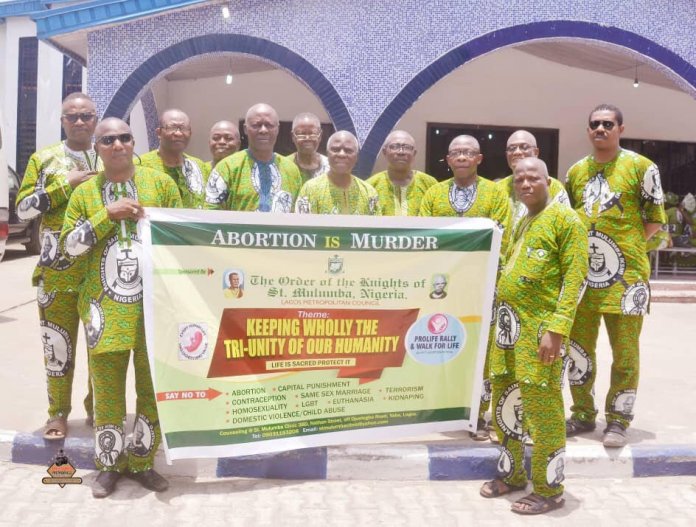 From the moment of conception, through to the development of the embryo to fetus, the formation of the body parts, up to the ninth month when the fetus has reached full maturity leading to childbirth, the value of life cannot be overemphasised. When you take your time to think about the miracle of life, this procedure when properly analyses leaves you breathless. Therefore, it becomes somewhat inconceivable finding a newborn in street corners abandoned to die or aborted fetus decaying in the dumpster. Hence the recent 12 km profile walk by the Knights and Ladies of the Order of St. Mulumba Lagos Metropolitan Council. The walk, which was held at the Ajegunle area of Lagos was to sensitise people against indulging in activities capable of endangering human lives.

The walk which started at St. Mary’s Parish, Ajegunle to St Charles and back, saw the Knights and Ladies create awareness on the menace these seemingly societal anomaly could cause to humanity; a core obligation in the Knighthood and a responsibility of Catholics in the society.

According to him, “society is to be blamed for not creating enough awareness on the issue of abortion,  kidnapping, cultism and other things that involves lives. If you are a neighbour and you see some of these things, you have to raise alarm so that the perpetrators would be arrested.”

Also speaking, Lady of the Knight, Mrs Uche Ezikeoha said “In Africa, it is a taboo to take life, once the child is conceived, you have no right to kill it. God will touch people’s hearts to stop abortion, because it is wickedness.”

She added that the rally was targeted at young girls on the street in order to educate them on the dangers of abortion. She likewise raised alarm on the area of insecurity in the country which has seen the rise in the activities of the cyber criminals,  a.k.a yahoo boys, who are young people that have probably passed out from universities without getting a job.

Still on insecurity she added that  “people are so scared of the National Youth Service Corps posting. When our children are posted to the North, parents get scared because of the insecurities caused by insurgency over there”.

Lady Knight, Umeh Genevieve while lending her voice to the course, said “God gives life and God takes life, no one is permitted to take life, even his or her own life”.

In our society today, abuse has become the norm- whether substance abuse,  domestic violence,  child abuse and even sexual abuse. These days, you will rarely flip through the pages of newspaper or switch on the television set without seeing news on abuse. Abuse of any kind is generally condemned world over, in various country there is a capital punishment against perpetrators of abuse,  despite this, the problem of abuse is steadily rising. Take Nigeria as a case study, we have seen the government move to place a ban on the sales of Codeine and Tramadol, because of its high consumption by young people.  It’s abuse is such that anyone carrying a bottle of soda is viewed as a suspect. It is against this backdrop that the pro life rally became very necessary.

Immediate past Grand Knight of the Lagos Island sub-council, Emma Agweh, speaking with young girls and parents in the area, said, “We have bad control in this country. Although we have laws but implementing them is a problem. The ports are so porous, in the past 10 years they have allowed fake drugs and substances in to the country. It was not like this before when drugs were  properly controlled by the Pharmaceuticals Association of Nigeria, it is no longer the same.

“Government has to give control to those who are knowledgeable in this area. But when they allow quacks to come in, then we have this problem on our hands. The curious nature of children can lead them into taking and abusing drugs. Children are prone to testing things. This is where the parents come into play, by letting them know that it is detrimental to their health first and foremost, and then teach them the consequences. Self discipline is the key to curbing domestic violence. You have to help yourself and family by getting busy and occupying yourself. When you are occupied there won’t be room for doing anything silly.”

It is true that the family is the smallest unit of the society. The family is in fact a social institution, and is the first place that values are taught. The power of this institution in influencing the society at large should not be underestimated. Therefore, to change any anomaly in the society,  the family has a very big role to play.

As Ezikeoha rightly said: “The family plays a big role in educating the young children against abortion,  and teaching them that there is more to life than sexual immorality, and also nothing gives you the right to take a life”.

On this Umeh said: “Mothers have a major role to play. The first classroom is the home and the mother is the first teacher. Do not spare the rod, so you do not spoil the child.”

While making a case for strong discipline of children in the home, even if it involves spanking them, she was quick to stress that “mothers should make their children their friend, and teach them sex education and make sure they are not too familiar with older people of the opposite sex. Mothers should be very friendly with their children, and also teach them about sex education, spelling out the names of their private areas so they know.

“Mothers should also monitor them, and make sure they don’t create much familiarity with adults of the opposite sex. One way of doing this is to tell them that this is Mr. Peter or Mr. John and not Uncle Peter or Uncle John.  There should be a limit to their relationship with such individuals. Encourage them to report anything to you, so that they do not become victims of abuse”.

For a society to effectively curb issues like abortion, abuse and molestation and even domestic violence, the government has a lot to do. This is because a responsible government is one that takes interest in the safety of its citizen as a priority. The government is the body to create laws regarding such problems, and in the case of defaulters, the government sets penalties as a way of correction.

Umeh further clarified the role of the government by stating that, “they should come up with laws, because we still have doctors that are guilty of carrying out abortions in Nigeria. If there are laws guiding against abortion, government would have contributed immensely in the fight against abortion”.

However, Agweh pointed out that the  implementation of laws is a problem of the Nigerian government. According to him, “we have laws, but implementation is the problem. Government is helping, but we have to help ourselves. The participation of the family down to the village heads in the society is key. There has to be proper control on drugs and sex. In the past, committing sexual immorality in the village incurs banishment of the individual and the family. Then there’s the stigma attached to it,  as people addresses them as a family of such sin and also avoids them”.

While a participant knight, Dr. Anthony Hemeson was of the view that government can curb these menace by providing employment, he said: “An idle man has a workshop at home, government should keep them busy, so they don’t fall to crime. For a society to truly thrive, there’s a need for every hand to be on deck, from the family to the school, the society at large and the church especially, which should come together in fighting societal vices like abortions, abuse, molestation, terrorism etc.

“Developing the society should be a conscious effort by the parties involved which in this case is you and I. The knights of the order of saint Mulumba have done their bit by walking over 12 kilometers and creating awareness and teaching young people in safeguarding lives, but the ball remains in our court.”