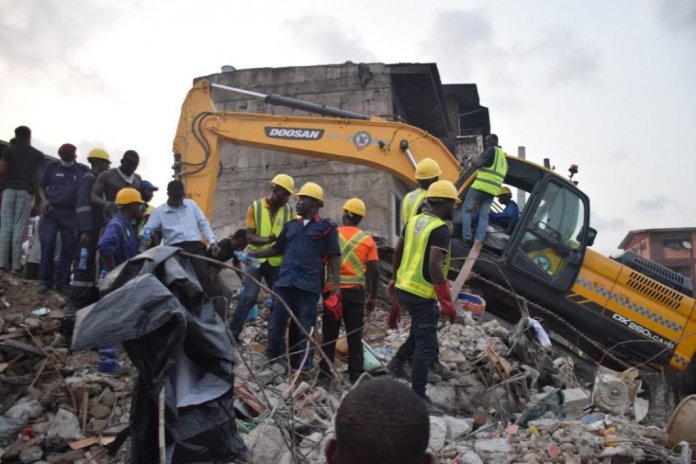 Following the March 13 building collapse at the Ita Faaji area of Lagos Island where 20 people died and injured 45 others, Ojo Maduekwe writes on the role of regulatory agencies in building construction and prevention of such collapses

As the melting pot of Nigeria, Lagos with over 20 million residents is congested. The weight of this huge population on a state with 3,577 km2  landmass is crushing. Vehicular and human traffic have become part of the city’s landscape, and building collapse a recurring eyesore.

Recently a building at the Ita Faaji area of Lagos Islsnd collapsed, killed 20 and injured 45 people. The three- storey building housed residents, and on the third floor was a primary school of about 100 students. It remains unclear if the building was designed to accommodate a school of that number, and whether the owner obtained the requisite approvals for the construction.

Few days after the collapse, the state government set up a five-man panel to determine the remote cause, threatened to sue the owner and developer if they did not come forward to “present their case”. The government also promised to resume demolition of earlier marked buildings.

Encouragingly, aside from the state government’s response to the Ita Faaji collapse, there were also humanitarian aid by private organisations such as the MTN Foundation. On March 14, a day after the collapse, the foundation which is the social investment vehicle of MTN Nigeria, provided succour to the survivors, donating medical supplies to the Lagos Island General Hospital, where some of the injured survivors were admitted.

Although proactive and highly commendable, the MTN Foundation’s response is only remedial and humanitarian. In fact, other corporate citizens should emulate the foundation’s swift response. Also commendable was the selfless act of some residents that donated blood to treat the survivors.

However, to prevent a recurrence, the state government has a responsibility to ensure that going forward every building under construction follows stipulated guidelines. So far, the many collapses and demolitions suggest that the Lagos State Building Control Agency (LASBCA) is failing in its regulatory role.
This shouldn’t have been if the LASBCA followed the law that established it.  Decree 88 of 1992 provided for the Nigerian Urban and Regional Planning Laws, and mandated a National Planning Commission for the federal government. The same law also provided urban and regional planning board for states, and local planning authority for the local governments.
Of all the 36 states, only Lagos has shown a degree of professionalism in its building construction plan with the establishment of LASBCA. However, like most federal and state government agencies, the functions and responsibilities of LASBCA have been politicised and characterised by alleged corruption.
According to Mr. Olusegun Ariyo, a journalist, certified urban planner and author of the book, Solution to Processing Land & Property Documents in Lagos State, a major challenge in urban planning in Lagos is ‘political interference’.
“You have politicians deciding who head agencies like LASBCA, and when a building is earmarked for demolition, you will see highly connected politicians begging on behalf of the owner,” he opined.

There is also the issue of bribery and corruption. “Some of the builders tend to bribe their way through, and since the majority of the staff in the regulatory agencies are underpaid and have no materials to work with, they are easily tempted,” Ariyo emphasised.

One key element embedded in urban and regional planning laws was the power given to regulatory agencies like the LASBCA to regulate and guide building development. However, so far, there has been little or no regulation by the agencies; governments at the federal, state and local government level have failed to arm their agencies with the requisite tools to function.

There is also a body that regulates the conduct of building engineers in the country, called the Nigerian Institution of Civil Engineers (NICE); but, many Nigerians, in a bid to cut cost in construction, resort to the services of quacks instead of registered engineers.

The responsibilities of NICE is to ensure that members are trained on safety measures in building construction, and as stakeholders working hand-in-hand with the relevant government agencies on how to curb building collapse.

When it concerns building construction, there are layers of professionals whose responsibilities merge to ensure that a building is well constructed. For instance, you have surveyors, engineers, builders, architects, and urban planners. In terms of regulation, it is the urban planners’ role to ensure that each professional in the construction process adheres to the approved design.

There is a saying that Nigeria is not short of rules and regulations, the problem has always been in the implementation of those rules. The challenge with the Decree 88 of 1992 and the Nigerian Urban and Regional Planning Laws that it birthed, has been in their implementation.

Therefore, it certainly won’t be out of place to say that many building collapses in the country are traceable to the failure of the government at the federal, state and local government levels in empowering the statutory regulatory agencies in discharging their duties. This is the challenge across Nigeria, and until this is fixed, no amount of panel can prevent another collapse.