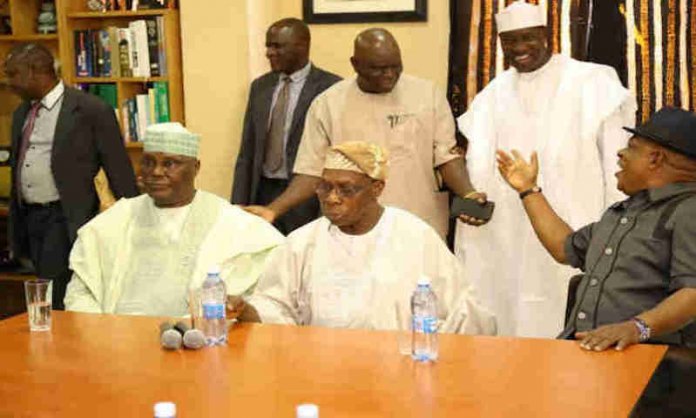 The performance of the PDP in the 2019 elections, puts a lie to claims by the ruling APC that the party was dead. Adedayo Akinwale writes

Soon after the Peoples Democratic Party (PDP) lost the presidential election to the All Progressives Congress (APC) in 2015, it immediately ran into serious leadership crisis, which almost tore it apart. For a party that has been in power for an upward of 16 years, the challenge of being an opposition party was a crisis on its own.

Former Borno State Governor, Ali Modu-Sheriff, was then appointed as the acting national chairman of the party on February 16, 2016, to steer the ship of the party till his removal from office at the 2016 National Convention. He was replaced by Ahmed Makarfi as Caretaker Chairman.

Sheriff’s removal did not go down well with him and this locked him up in a leadership tussle with Makarfi for the soul of the PDP, since May of 2016, when the PDP held parallel conventions in the cities of Abuja and Port Harcourt on the same day.
The judgment of the Supreme Court in June 2017 later put paid to the legal battle for the control of the party.

Not long after the National convention of the party held at Eagle Square and produced the Uche Secondus leadership, the party embarked on the reconciliation of aggrieved members of the party and also rebranding of the party, promoting internal democracy and jettisoning imposition with the aim of launching the party back to reckoning.

In the run up to the 2019 general election, political analysts did not give the PDP a chance. The reason may not be far-fetch. A supposed opposition party was yet to find it footing.
Besides, the battered image of the party as an epitome and epicentre of corruption for 16 years of its alleged misrule ensured that it no longer appealed to Nigerians as a party that could save the country from imminent collapse and the economic quagmire, which the APC administration had plundered the country into.

Nevertheless, the party’s chances ahead of the 2019 elections started to blossom when the failures of the APC-led administration became quite glaring even to the blind. This left Nigerians with no option than to choose from between two evils one. So, returning to the PDP to seek solace and refuge became the only option as the lesser evil.

Also, the successful convention held by the party between October 6 and 7, 2018 in Port Harcourt, Rivers State capital, which produced former vice president Atiku Abubakar as the party’s presidential candidate in the 2019 presidential election and which was adjudged by all to be credible and transparent, boosted the party’s chances, when compared to the way and manner President Muhammadu Buhari was handpicked by APC which lacked any semblance of democratic process.
The performance of the PDP in the 2019 election has shown that the main opposition party is not dead after all. To start with, the presidential election, despite the strategy adopted by the ruling party by heavily militarising the states, where PDP was presumed strong, scaring away party supporters and voters sympathetic to the party in some cases, as well as using thugs to scare voters went a long way for the APC.

The situations in places like Rivers, Lagos and Benue among others and even the off-season election that took place in Osun State, easily come to mind.
Even with the help of some security agents, compromised staff of the Independent National Electoral Commission (INEC), the burning, disruption and outright cancellation of polls in some areas across the country, where the PDP appeared to be coasting home to victory it still was a close battle between the APC and the PDP.
It was equally not a bad showing for the supposedly dead party both in the Senatorial and House of Representatives elections as the party has a sizeable number of lawmakers that would constitute the 9th Assembly.

The main opposition party also gave a good account of itself in the governorship elections that took place across the country. The supposedly dead party now controls 14 states at the moment. This includes Cross River, Akwa Ibom, Bayelsa, Benue, Delta, Oyo, Imo, Abia, Enugu, Ebonyi, Taraba, Sokoto, Bauchi, and Adamawa States.
While the collation of results will be concluded in Rivers State, and supplementary election conducted where necessary next month and with Kano, Osun and Zamfara States still subjects of litigations, the PDP may end up having 17 states. That is not a mean fit for a party that was never given any chance in the first instance and that’s equally a good structure to build off on ahead of the 2023 elections.

On the other hand, the ruling APC has made a very poor use of federal might and outright rigging to be able to win some states. Even elections in some states where the party was on the verge of losing were declared inconclusive by INEC, thus giving the party more time to re-strategise and perfect the plans to win the state. Kano and Osun States are perfect examples here.

PDP Vice Chairman, South-west, Dr. Eddy Olafeso, said the party has been able to prove itself to those who thought it was dead with its showing in the 2019 elections.
He said, “We have been able to prove ourselves right and by my assessment, we have equally won the presidential election but for the connivance of INEC and the APC, the story would have been different today, but that would be proved by the Tribunal, and at the Appeal and of course the Supreme Court.

“At no time were we dead. We had our internal challenges like you have said and we were able to overcome it. You know party politics is dynamic and what we need to do is to ensure, like we have assured all Nigerians, that we are going to improve on our internal process and to ensure that we allowed people to own their party again and that whatever decision taken by them regarding those who will lead them will be what we agreed on. So, that’s what we’ve been able to do. We have made our mistakes, we have learnt from them and we are moving on,” the PDP chieftain added.

Evidently, the PDP is not dead. If the party was able to win more states without the use of federal might, then it is not dead. In fact, the party is more alive than the ruling APC, which may likely collapse after the 2019 elections due to internal high wire politics, combative leadership, power play and as well as alignment and realignment of forces ahead of the 2023 presidency. The party might also find it difficult to stand as soon as Buhari, who is the rallying point, completes his second term in office.