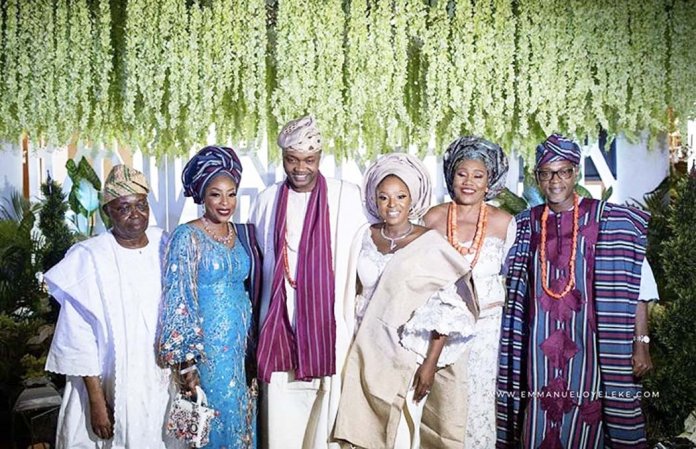 Media mogul, Mo Abudu’s daughter, Temidayo’s traditional wedding over the weekend might just be the biggest wedding in Nigeria this year and you may well agree with us that the only weddings known for such opulence are those of top government officials and aristocrats high net worth tycoons.

Of all other things, Mo is specifically known for her high taste when it comes to fashion and flair for sartorial elegance. This explains why many were not quite surprised by the lavish ceremony she staged to mark her daughter, Temidayo and her long time boo, Adebola Makanjuola’s big day. This isn’t a box office experience, but the original wedding party and the sequel will be in Los Angeles in the next few months.

With the beautifully selected colours of the day (light shades of pink, black, white and blue, then peach, gold and green from the grooms side) Alari for Mo Abudu’s mother and her friends.The aso-ebi star studded event was a sight to behold. Everyone in their own right made a fashion statement. The groom’s mother aso ebi was gold and green while his father was peach.

Mo and her daughter Temidayo had a first and second look, we can tell you for a fact that it was twice the appearance, twice the elegance and style. The fabrics for mother and daughter was from Uzz fabrics owned by Bisola Giwa-Osagie and Fadora fabrics owned by Yinka Fowora. Mo Abudu’s two outfits were designed by Lanre Da-Silva while and her daughter’s was Couture by Tabik.

About the groom, Adebola Makanjuola.

He is the son of Chief Oluremi Muyinudeen Makanjuola, a billionaire and the chairman of Caverton Group and Lady Cassandra Omage. He holds a Bachelor of Arts degree in International Business/Trade and Commerce from the University of Portsmouth in the United Kingdom; and a Master of Arts in Global Business Management and Leadership from Regent’s University, London. He is extremely private and has been dating Temidayo for a long time. At the wedding party despite the crowded settings, we couldn’t help but notice the sophistication of the groom’s family, the Makanjuolas too. Adebola’s mother was simply gorgeous and elegant .

About the Bride, Temporary Darkness

She is the daughter and first child of Tokunbo Abudu, a business man and a legal luminary and popular media mogul  and EbonyLife TV CEO Mo Abudu. She is a TV  producer who has earned prestigious name in the entertainment industry in Nigeria. Temidayo has worked on EbonyLife Films productions such as, On The Real, The Royal Hotel, Castle & Castle and Chief Daddy. She studied Marketing at Royal Holloway, University of London.

Who is Mo Abudu

I call her the Iyalode of Nollywood. The first encounter and interview with her was at her Vic Laurence office in Victoria Island ages ago before her detour into media services.

From conquering the media space in Nigeria and indeed Africa, Mo Abudu has also become a force to reckon with in the film making business.

In 2013, Forbes Africa recognised Abudu as the first African woman to own a Pan-Africa TV channel. CNN referred to her as “Africa’s Queen of Media who conquered the continent” and in 2013 again, she was listed as one of the 25 Most Powerful Women in Global TV by The Hollywood Reporter. If you have been keeping up with the 54-year mother of two, then you would also know that she’s all that and more.

In the world of fashion, Mo’s social media pages have become a must-go-to spots for loads of fashion lovers and fashionistas in Nigeria, as she has just about the right amount of elegance, charisma and sophistication to keep her followers coming back for more.

With Mo, every appearance is a fashion statement and she can do no wrong in our eyes.

This was evident at the just concluded traditional wedding of her daughter, Temidayo. Despite all the gorgeous looks at the ceremony, one thing we all can agree on is that fact that Mo Fabulously stood out from the crowd. Nobody took her shine at the party, she glittered all through. From her first to second outfits, all we could see was the elegance, grace, sophistication and charm. Safe to say she stole the show, period!

But did Mo Abudu take the shine at her daughter’s wedding?

Socially, it’s safe to say Mo is an extrovert while Temi is her direct opposite.

Thus, when it comes to fashion Mo is also more out there, she doesn’t hesitate to try and play around with just any comfortable pieces. You may want to consider Temidayo’s conservative nature in this regard because she’s totally not into fashion and style. She is indifferent and can’t be bothered.

Thus, we expected that much fashion statement from Mo on her daughter’s wedding and I can tell you for a fact that they both shone differently and amazingly.

For the records, Temidayo is a known name as far as the entertainment scene is concerned in Nigeria. She’s a filmmaker, a director and she’s gradually carving a niche for herself in the industry.

Ogun State governor-elect, Prince Adedapo Abiodun and his pretty wife, Bamidele, were at the wedding. His demeanor was calm. He sat with the former chairman of Skye bank, Chief Tunde Ayeni. Although Abiodun has tasted the corridors of power and contested for an elective office in 2015 when he lost in the contest for the Ogun East senatorial seat, he kept pressing forward undaunted because an inner voice was reminding him the vision was only for an appointed time.

Many knew and saw how his former friend, the outgoing governor, Ibikunle Amosu, fought him tooth and nails.

You may also recall that when president Buhari visited Ogun state, it was only Dapo Abiodun among the party chieftains that didn’t wear the APC aso ebi during the rally. He was humiliated severally by the outgoing governor but kept calm all through the storm.

He supported Otunba Gbenga Daniel when he contested  and  in 2011, he joined hands with the incumbent, Governor Ibikunle Amosun, to win the election. In 2015, and he wanted to be a senator, he was stalled and lost out completely.

Much is left to imagine about how  governor Ibikunle Amosu feels right now after fighting Dapo Abiodun the way he did.

Dapo Abiodun is going to be the landlord of the same government for the next four years, this transition speaks truth to the transiency of  power,  so you’d understand the emotions behind Abiodun’s confession, “If men were God, l won’t be Governor-elect”

This was her first social appeareance after her husband lost his bid to return to the senate and probably have lost out completely in the power tussle of the state politics, with Abdulrazaq Abdulraman as the governor-elect of Kwara State. Only time will tell if Bukola Saraki can hold sway politically in Kwara State again. Anyway, back to Toyin.

She adorned the baby pink aso ebi, looked classy and sophisticated like she always does. She mingled with her friends and some acquintances, and obviously politics stretchy dark days are over now it is time to hit the fun streets with friends again.

Artists who performed at the wedding

The arstists who performed at the wedding include,  Chief Sunday Adeniyi Adegeye, popular known as King Sunny Ade, who had everyone on their feet dancing throughout the event with his energetic performance. Closing the ceremony were  Burna Boy and Tiwa Savage coming through with more amazing performances.  The relaxed ambience of the occasion as well as the assorted drinks and foods were top notch.