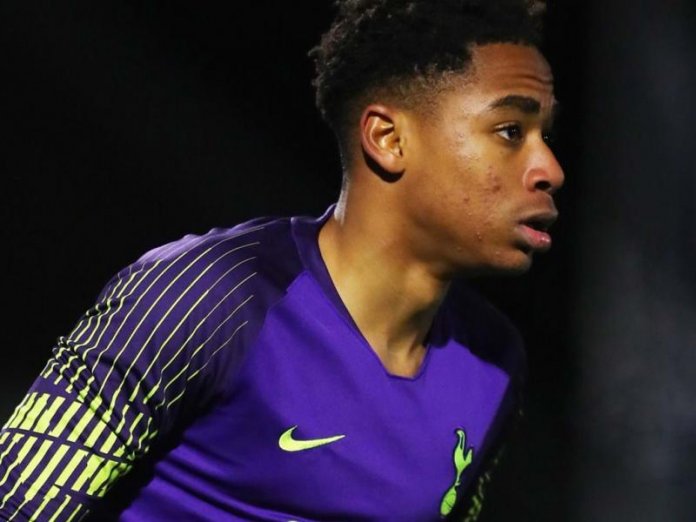 After Francis Uzoho committed the schoolboy error which gave Seychelles the equaliser in the 3-1 loss to Nigeria, it was obvious that the goalkeeping area is still one of the weakest links in the Super Eagles team. It was, therefore, a piece of cheery news when Tottenham Hotspur whiz kid, Joshua Oluwayemi recently committed his international future to Nigeria over England in spite of having represented the English at the age-grade level

Highly-rated Tottenham Hotspur goalkeeper Joshua Oluwayemi has committed his international future to Nigeria over his country of birth England ahead of the 2019 FIFA U-20 World Cup in Poland.

Born in Waltham Forest 18 years ago, Oluwayemi comes from a family of goalkeepers as his father, Abiodun Ogunyemi, was a goalkeeper for Ogun State University and attended Federal Government College Odogbolu, while his sibling, Tobi is also a goalkeeper at Tottenham Hotspur.

Oluwayemi has represented England at U-15 and U-16 levels and has said that he will accept an invitation to play for the Nigerian teams if approached by the Nigeria Football Federation.

Speaking after Tottenham Hotspur U-18s beat Southampton 3-1 in the first game hosted at New Tottenham Hotspur Stadium on Sunday afternoon,  Oluwayemi told mafisportsmedia.com : ‘’If Nigeria comes for me, then I’ll go but at the moment I am focusing on England youth, and then Nigeria first.’’

On playing the first game at the new Spurs Stadium, the second-year scholar said: ‘’It’s a very good experience, I am happy to see a lot of fans and the crowd coming over to support us. It was a good result.’’

Oluwayemi is learning to be a top goalkeeper under the tutelage of Tottenham Hotspur and Arsenal legend Pat Jennings.

He did not, however, last long as the Wolverhampton Wanderers FC safe hands was diagnosed with acute leukaemia in July 2017, culminating in his early retirement from football.

“After a tough year and intense chemotherapy treatment, I would like to let everyone know I am in complete REMISSION. I still have hurdles to get over to be cured but I can hopefully now move forward with some normality.

“I would like to thank my family/friends, to start with who have gone above and beyond for me. The support I have received from Wolves/Nigeria, the football world and from people from all over the world has been hard to put into words. I can’t thank everyone at the Christie and Heartlands Hospital enough for their care!!! What next who knows…I’m just taking it a day at a time,” Ikeme had announced.

During the 2018 World Cup qualifying matches, three goalkeepers were on parade-  Ikeme, who lost out to acute Leukaemia, Daniel Akpeyi, who was shaky against Algeria in Uyo and Ikechukwu Ezenwa, who Rohr has no total conviction in. With Dele Ajiboye and Dele Alampasu were outsiders, forcing Super Eagles Manager Gernot Rohr to turn his searchlight on the then 18-year-old Deportivo La Coruna’s Francis Uzoho.

With the commitment of Oluwayemi’s international future to his fatherland, one can only hope that the problem in the goalkeeping department of the Super Eagles won’t last long.