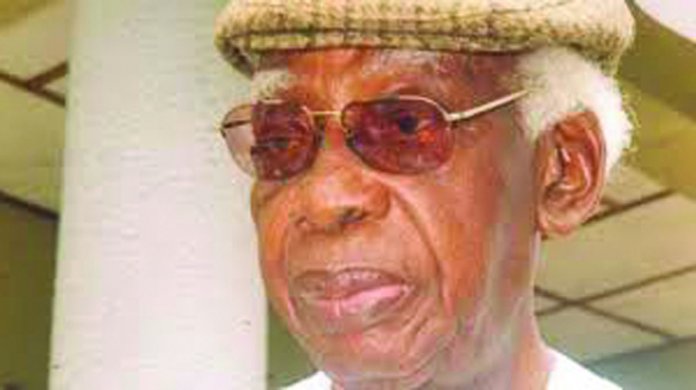 “Certainly, things will change for the better. No society is static. As the old writers pass away the young ones will take over the fight for change; it is a continuous fight. And change will come eventually.” As optimistic as that statement from Gabriel Imomotimi Gbaingabin Okara appeared just a decade before his passage on Sunday March 24, at the ripe age of 97, it bears a task for the existing and future generation of writers.

The celebrated poet, novelist and playwright made a mark on the African literary scene as one of the major pacesetters. Reported to be the first renowned English Language Black African poet and the first African modernist writer, Okara is widely published in influential national and international journals. His exit sure leaves a vacuum in the literary firmament and as a dedicated and well-published writer in all the literary genres will be fondly remembered for his immense contributions to the development of African literature.

A largely self-educated man, whose verse had been translated into several languages by the early 1960s, Okara was born in Bomoundi in the Niger Delta in 1921. He was educated at Government College Umuahia, and later at Yaba Higher College. During World War II, he attempted to enlist in the British Royal Air Force but did not complete pilot training; instead he worked for a time for the British Overseas Airway Corporation (later British Airways).

A lifelong patron of the Association of Nigerian Authors (ANA), Okara in 1945 found work as a printer and bookbinder for colonial Nigeria’s government-owned publishing company. He remained in that post for nine years, during which he began to write. At first he translated poetry from Ijaw into English and wrote scripts for government radio. He studied journalism at the then Northwestern University in 1949, and before the outbreak of the Nigerian Civil War (1967–70) worked as Information Officer for the Eastern Nigerian Government Service.

In 1953, his poem “The Call of the River Nun” won an award at the Nigerian Festival of Arts. Some of his poems were published in the influential periodical Black Orpheus, and by 1960, he was recognized as an accomplished literary craftsman. Okara’s poetry is based on a series of contrasts in which symbols are neatly balanced against each other.

The need to reconcile the extremes of experience (life and death are common themes) preoccupies his verse, and a typical poem has a circular movement from everyday reality to a moment of joy and back to reality again. Okara incorporated African thought, religion, folklore, and imagery into both his verse and prose. His first novel, The Voice (1964), is a remarkable linguistic experiment in which Okara translated directly from the Ijo (Ijaw) language, imposing Ijo syntax onto English in order to give literal expression to African ideas and imagery.

The novel creates a symbolic landscape in which the forces of traditional African culture and Western materialism contend. Its tragic hero, Okolo, is both an individual and a universal figure, and the ephemeral “it” that he is searching for could represent any number of transcendent moral values. Okara’s skilled portrayal of the inner tensions of his hero distinguished him from many other Nigerian novelists. During much of the 1960s, Okara worked in civil service.

From 1972 to 1980 he was director of the Rivers State Publishing House in Port Harcourt. His later works include a collection of poems, The Fisherman’s Invocation (1978), and two collections of children’s poetry, Little Snake and Little Frog (1981) and An Adventure to Juju Island (1992). One of Okara’s most famous poems is “Piano and Drums”.  Another popular poem, “You Laughed and Laughed and Laughed”, is a frequent feature of anthologies. In 1979, his Fisherman’s Invocation won the Commonwealth Poetry Prize.

In 2005, he bagged the highest literary prize in Nigeria, NLNG Prize, instituted by the Nigeria Liquefied Natural Gas. Okara was very concerned with what happens when the ancient culture of Africa is faced with modern Western culture, as in his poem “Once Upon a Time”. According to Brenda Marie Osbey, editor of his Collected Poems, “It is with publication of Gabriel Okara’s first poem that Nigerian literature in English and modern African poetry in this language can be said truly to have begun.”

In April 2017, the Gabriel Okara Literary Festival was held at the University of Port Harcourt in his honour. The publication in May 2017 of the book Gabriel Okra, edited by Professor Chidi T. Maduka, addressed Okara’s “place in African literature and the fact that he has not been given his full due in African literature”, which was partly attributable, said Lindsay Barrett, to Okara (like himself) not having been “university-based”, while Odia Ofeimun acknowledged Okara as “not just the oldest writer but a foundational producer of the literary arts in our part of the world.”

One of many personalities to eulogies Okara soon after his passing is a former Bayelsa State Governor, Chief Timipre Sylva, who described the demise of the literary giant as a moment of deep and contrasting emotions. Sylva believes the octogenarian poet lived a worthy and fulfilled life and his demise should not be overtaken by mourning, but by celebration of a life well and completely lived.

“A colossus has passed, but not without leaving prints on the sands of time and setting standards for literary and intellectual excellence. Okara’s passing is not one to mourn; it is for celebration and for pride and for the marking of a platinum point in cultural mileage. Our regards must go to the Okara family for presenting Bayelsa, Nigeria and the world with a titan who added value to our lives.”

Sylva further revealed that as a keen fan, admirer and friend of Gabriel Okara, he studied the poems of the Nigeria “Negritudist” (as termed by literary scholars) in his undergraduate years and beyond. “Particularly, is the poem ‘Call of the River Nun’ which is one of the most aesthetic and philosophical portrayal of the complex, but natural relation of life and death. Piano on Drums, on the other hand, like it must have been for millions around the world, was an artistic guide in navigating the maze of the culture shock at various points of earlier years,” said Sulva.

Okara continued to write even at advanced old age. Married and divorced three times, he had two children of his own. At the century’s end, he was reported to be at work on a large poem called “The Rise and Fall of the Tortoise,” a common figure in West African storytelling.

In his twilight, Okara had reminded that “Writers express their own ideal society, the kind they would like to live in. And sometimes they forecast what the society in which they live will become in future. But everything depends on the leadership. While writers try to show the way, it is left for the leaders to bring about the physical development. It is the leaders, the governors, the president and others who are in government that can change the society through initiating policies for development and executing such policies. They are supposed to effect the physical changes like good roads etc. that affect the lives of the people. The kind of change that writers bring about is that of attitude. And attitudinal change takes a long time. Sometimes it takes generations before some changes could be noticed.”