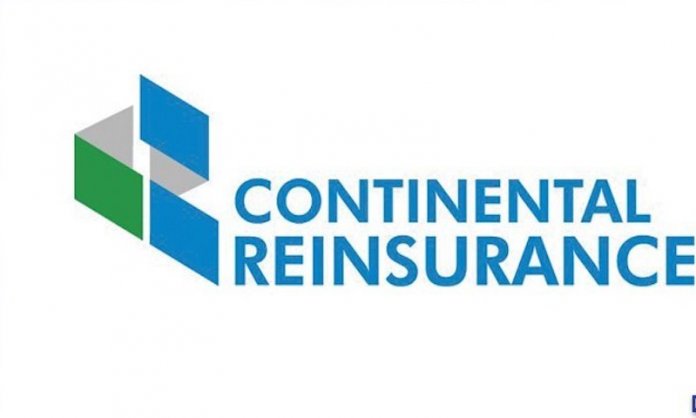 Continental Reinsurance Plc said it recorded Gross Premium Income of N34.19 billion in its full year result for the 2018 financial year.
This represented 15 per cent growth from what the company achieved in 2017.
Announcing the achievements of the company in the year under review, Group Managing Directorof Dr Femi Oyetunji, said Continental Re, during the period grew its pretax profit by 22 per cent, while underwriting profit stood at N1.18 billion.
He said the company’s pre-tax profit rose to N4.36 billion in 2018, up from N3.57billion in 2017, just as its investment income grew by 44 per cent to N5.36billion.

He said given the potential cyclicality of reinsurance underwriting business, the composition and structure of earnings reflected the benefits of the companies’ geographically diversified operations that gave it flexibility in generation of top-line, enabling it to offset the impact of localised adverse claims experience with better quality premiums from other regions, broad asset mix and investment management prowess that smoothens the volatility of underwriting earnings.

“Market and business-cycle insight are key. It’s about deploying the right strategy and having the right operational balance.
“We have resources with deep local knowledge of the diverse environmental dynamics across Africa who marry their insights with strong technical capabilities to achieve sustainable positive outcomes in both our underwriting and asset management activities.

“I must say that our Group has once again shown resilience with our teams optimising production and maximising return on investments”, said oyetunji.
He explained that the continental Re Group top-line growth was driven by its deepening pan-African presence.
“From a segment perspective Southern Africa, Eastern Africa, Central Africa and Francophone Western Africa grew at strong double-digit rates of 48 per cent, 25 per cent, 24 per cent and 12 per cent respectively, whilst Northern Africa and Anglophone Western Africa grew by six per cent and four per cent respectively,” the continental Re boss explained.

He further pointed out that the company’s experience in product mix remained stable, with fire and engineering accounting for 54 per cent, followed by General Accident at 16 per cent, Life at 12 per cent, Energy at eight per cent, Marine at seven per cent and liability accounting for five per cent of the gross written premium.

He said going forward, they company would continue to focus on strengthening its regional operations with focus on continuous renewal of its talent base, solutions offering, operating model, core processes and the technology it deploy, adding that in order to embed the assimilation of the continental Re brand and its distinctive value proposition into the evolving, and increasingly sophisticated African market.

According to Oyetunji, in 2018, Continental Reinsurance completed the incorporation and capitalisation of a subsidiary office for its CIMA region.
He noted that based on strategic priorities, it had so far successfully rolled out fully fledged subsidiaries in three regions with initiatives underway to execute in the remaining one.
“Localisation has hitherto facilitated better synergies and market strength and translated to strong growth. We expect this to be replicated in the CIMA region.