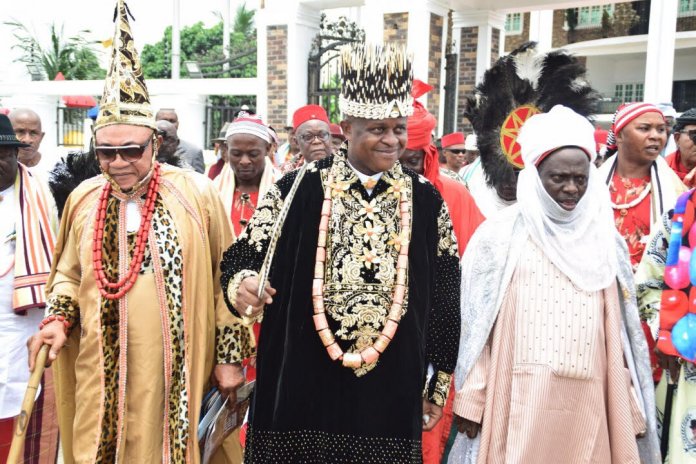 There was palpable excitement as the people of Eleme community, one of the local government areas in Rivers State, came out en masse to witness the reawakening of a long forgotten tradition; Okon-Esaa, the Yam Title Festival, which they had abandoned for 44 long years. Mary Nnah reports

Every ethnic group has a culture or tradition indicated by the display of various activities and events, some of which are typical of their ethnic nationality.  The Okon-Esaa, meaning ‘Yam Title Festival’, is one of such cultural events that are distinctive to the Eleme people in Rivers State. However, the last time this festival was celebrated was in 1975, some 44 years ago.

Thankfully, the long forgotten tradition was recently resuscitated by the paramount ruler of Okori, the Egbere Emere Okori 1 of Eleme Kingdom, His Royal Highness King Appolus Chu, as a way of encouraging the younger generation to seek more positive outlets for venting their energy.

Okon-Esaa, a cultural practice that defines the Eleme people was not observed for a very long time.  And the failure to observe it raised concerns over the years. It was therefore excitement and funfair when the paramount ruler of Okori, decided to facilitate the reoccurrence of this noble but almost vanished tradition. No wonder he is being held in high esteem by his people for reviving such a gallant tradition.

So, for the first time in 44 years, the people of Eleme Kingdom witnessed the age long tradition, a custom initiated by their forefathers to make people embrace farming and in return be celebrated for being industrious and successful. The exciting and impressive cultural event held in Eleme local government of Rivers State, drew traditional rulers, politicians and friends from across the country.

Appolus Chu, who resuscitated the noble tradition by planting, harvesting and storing a large number of tubers of yams in his barn, was also honoured with the highest level of yam title, “A-Chu Ette Esaa”, a title that goes with the great feat of being the man with highest number of tuber of yams in the land.

Farm work is symbolic in Eleme culture and tradition. A man is fit to marry a girl only if the parents of the girl can see evidence that the man can take care of their daughter and their children. Therefore, his ability to clear the bush, plant and the strength displayed during the farming and harvesting of the yams is watched with keen interest. Hence, the man must be industrious and hard working.  This shows how important the Okon-Esaa Festival is.

There are four levels of Okon-Esaa.  A-Chu is the first level. This is a display of 21 tubers of yams on a yam barn in 100 places, bringing the total numbers of yams to 2,100 in a barn, traditionally called O-gun. This what makes up the first title, which is A-Chu.

The A-Chu yam title is highly celebrated as the successful farmer bags a chieftaincy title as a reward for hard work.  As part of the ceremony, the celebrant is made to climb the symbolic traditional Hill (Epee cha ebo ekpo), an act that signifies that he has been elevated out of the level of an ordinary citizen by reason of his hard work and achievement and called into the class of the title holders, which makes him one of the stakeholders in the community.

There are also other titles in between A-Chu, that follow sequentially in rank like Obo, Obere Obo, Otaa Obo, and then the final level of yam title, A-Chu Ette Esaa, ascribed as the highest level of yam title in Eleme.

Therefore, to earn this title, a man must have 42,000 tubers of yams in his barn and the HRH Appolus Chu successfully attained this feat, which was celebrated in grand style during a ceremony that culminated in his slaughtering of a bull.

Chu who performed the official slaughtering of the bull was later presented with gift items from the family members, friends, in-laws and well-wishers who come from far and near bearing gifts to thank the celebrant for honouring and elevating them in the society.

This is because the honour ascribed to the title covers all those who are related to him in one way or the other and from then on family members are regarded as relatives of an industrious and successful man.

Another highpoint of the festival was the tour of the yam barns of the paramount ruler, which contained 42,000 tubers of yams. Chu is the first Eleme son to have qualified for the A-Chu Ette Esaa in short period, which otherwise would have taken about 20years for anyone to qualify for such title.

“What HRH Appolus Chu has done today is unheard of in the history of Eleme. This is the first time in the annals of Eleme that anyone would be taking all the Okon-Esaa titles at once. This is a feat that ordinarily would have taken at least 20 years to accomplish but this illustrious son of Eleme has done it at once”, one of the participants at the event quickly chipped in.

The ceremony for A-Chu Ette Esaa title, performed at the front of the yam barn (Nsi Ogun) under a small hut roofed with palm fronds (Ola) had the celebrant, dressed gallantly in richly adorned long attire, a hat and a bell tied to his waist with a string of cowpea-like instruments handing from one of his shoulders down to his knee. He also had a small traditional musical instrument, the gong, with a stick to play it. He walked majestically in a procession before the people accompanied by various title holders in the land. The climax of the ceremony was the killing of a bull by the celebrant.

Speaking on the significance of the Okon-Esaa Festival in general, Chu, said: “Anyone that loses his culture has automatically lost his identity and when you have lost your identity, you are as good as s stranger in your own land.”

He expressed therefore that the festival was a parameter that the forefathers set for hard work, adding that it was a way of celebrating hard work, industry and success among the people of Eleme.

“The number of yams a person was able to display in his barn was indicative of his success, worth and value to the community. Our forefathers initiated these festival as a means of encouraging the youths to channel their energy to farm work. Accumulated energy needs to be expended somewhere and somehow,” he noted further.

Moreso, the paramount ruler explained further that one more reason why their forefathers instituted the festival and attendant titles was to encourage healthy competition among the people.

“No society can grow without healthy competition. In the old days, those who attained these titles were revered as stakeholders in the community. They along with the king and aged people were the only ones entitled to go about with walking sticks. So the right and privileges enjoyed by the title holders served as a motivation for others to work hard and aspire towards such titles.”

Okon-Esaa, in general, the paramount ruler believes will encourage people, especially the youths to expand their energy on farming rather than engaged in anti-social activities.

“I observed that a lot of our youths at the moment are discharging their energy in the wrong direction by engaging in cultism and hereby causing restiveness in the community. So I had to sit and then review what our forefathers had done in the past. I then concluded that such act was a brilliant one because by the time you engage in farming and do all the farming exercise for the day, by the time you walk back home at the end of the day, you are tired and exhausted. All you want is to bath, eat and take a rest for the day so that you can go back to work at the farm strong the next day.  With such schedule, you won’t have the time to get involved in nefarious activities”, he explained.

Little wonder a teenager, Sunny Nnanta said, “Our king has shown example of how rewarding being involved in agriculture could be and as a youth I will like to get involved in yam farming.”

Even the adults were also motivated to toe the line of the paramount ruler while they commended him for reviving a once forgotten culture, saying that it would further encourage the young generation to embrace agriculture.

Former member, House of Representatives, Fred Igwe said, “I just want to thank God that at this point in time, a man like HRH Appolus Chu, has come to revive the culture and with this, you can be rest assured that so many of us who have reached the age of doing it will do and people like me are challenged and we would do it to the last level.”

For Olaka Nwogu, an indigene, it was a beautiful occasion. “This just shows the world the rich culture of the Eleme people and that from time immemorial our people were great farmers. This is just one of the ceremonies that made people achieve food sufficiency and when you are a great farmer, you are honoured”, he added.

The Okalakwu 1 of Igbariam, Anambra State, HRH Nkeli Nzekwe, said that this was a kind of celebration that would bring peace to communities.

Another son of the soil, Mr. Chujor Emeka, a reputable lawyer, explained that the festival is basically to show that you are man of industry, a hard working person, a person who is capable financially and otherwise to lead the community.

For Major General Sanusi Muazu, an Eleme title holder, the concept of the yam festival is a clear signal for the youths, especially unemployed ones to work hard and harvest more yams in the next season.

Title staff were given to a few people during the ceremony and they were to within 12 months observe the yam title festival. This, many said will ensure the continuity of the revived tradition.

Caption: HRH Appolus Chu flanked by traditional rulers from other parts of the nation during the Yam Title Festival