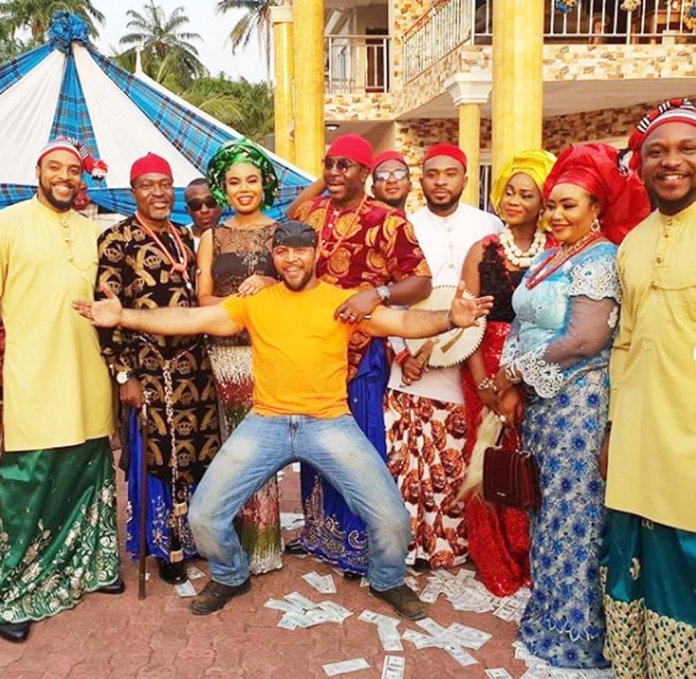 Re-creation of the classic ‘Living in Bondage’ movie that marks his directorial debut is still in the making as Nollywood poster boy, Ramsey Nouah, gives a new date for its release. Ferdinand Ekechukwu reports

When ace Nigerian actor Ramsey Nouah and business man, Charles Okpaleke set out on a mission to possibly remake ‘Living in Bondage’, the Nollywood classic movie of the 90s, it immediately raised a nostalgic feel steeped in excitement. Little did they envisage the project would be entrapped in production technicalities that would take the work more time than required to get to the cinemas.

In a telephone chat with this writer, the famous actor who is on set in Ghana revealed that production of the movie was still on and not in post-production yet, as widely believed. “It’s still in production. Not in post-production yet. We have done 90 per cent of the work,” he said. The work has been in the making for over three years now, although certainly not the first Nollywood production to have taken such time.

The veteran Nollywood ‘lover-boy’ had earlier hinted of a tentative schedule that would see production completed in January and the movie released during Easter season. However, he explained that, “We had to call off production the second time after we picked up in February but was called off again.” He stated that the movie would be released towards end of the year, in September precisely. The reason he attributes to technical issues with the partners that would have given a soft landing to the movie in terms of the budget.

He further confirmed that it’s actually a recreation of the original movie which he was inspired by his love for challenges. “I love challenges… tasks that probably challenges me. The movie project is not new. It’s a sequel. We have been on this now for over three years.” Remarkably, one fears that it just might lose it steam when completed. On board the project is Play Network owned by Charles Okpaleke, Native Films by renowned movie practitioner  Steve Gukas, and Ramsey Films by Ramsey Nouah.

Notably, Nollywood is no stranger to sequels. However, creating sequels to nostalgic films from the 90s is new. Most originals are held in such high esteem that many sequels don’t stand a chance. However, it takes a great script, director and actors to ensure that a sequel doesn’t simply recycle everything viewers already know about the original. It was very important that the sequel appeals to a mixed demography of the past and the present.

So when they wrote the story, they felt it was lopsided. They were trying to catch the demography of today who go to the cinemas and those who have not seen the original movie. Trying to use the original to create the same feel for the sequel was not an easy task for him. As Nouah noted elsewhere, “Here’s the issue, at the time we originally shot ‘Living in Bondage’, about 26 years ago, the generation of those who actually saw it, I doubt if they go to the cinemas. So, now the issue is to balance the story.”

First released in 1992, and its half part in 1993, it was the film to beat in that era. The follow-up work to the cult drama thriller of the same name would mark Nouah’s directorial debut after it was announced in 2015 having secured the rights from Kenneth Nnebue, the originator of the epic movie. Just according to Nouah, “In 2015, we went to get the license from the original owner, Kenneth Nnebue. We went to look for him, we got the license and for two years, we were having problems with writing the story.

“To get the demographic of those who originally watched it and the demographic of today. We’ve done over 10 drafts already before we finally came to this last one.” Living in Bondage afforded Nigerians an opportunity to see a homegrown production at the time most of what Nigerians purchased to watch at home were American, Indian and Chinese films.

The new movie which would now come with a sub theme ‘Living in Bondage: Breaking Free’, as Nouah had confirmed, was filmed in Europe and America as well as Nigeria, with a good number of its lead actors like Kenneth Okonkwo, Bob Manuel Udokwu, and Kanayo O. Kanayo in return. The original had starred household names like Kenneth Okonkwo as Andy, Nnenna Nwabueze as Merit, Francis Agu as Ichie Millionaire, Bob Manuel Udokwu as Mike, Ngozi Nwosu as Ego, Kanayo O. Kanayo as Chief Omego, Rita Nzelu as Tina among others.

Additions to the movie include Ramsey Nouah, who would be taking up a villainous role and Enyinna Nwigwe in an unknown role. While it was not the first Nigerian film to be produced, it inspired a passionate following and kickstarted the popular money ritual plot in Nollywood. Many even recognised it as the film that led to the evolution of the movie industry and the home video market boom in the 90s.

The original movie told the story of a man who sacrifices his loved wife for wealth. After her death, her ghost returns to haunt him. To a movie critic, 26 years after its release, “Living in Bondage” is still in the pop culture landscape.

And for 28 years, Nouah has steadily made an indelible mark on Nollywood by carving out a great career for himself in front of the camera, which provides him all the experience to cement his legacy with a stint behind it.