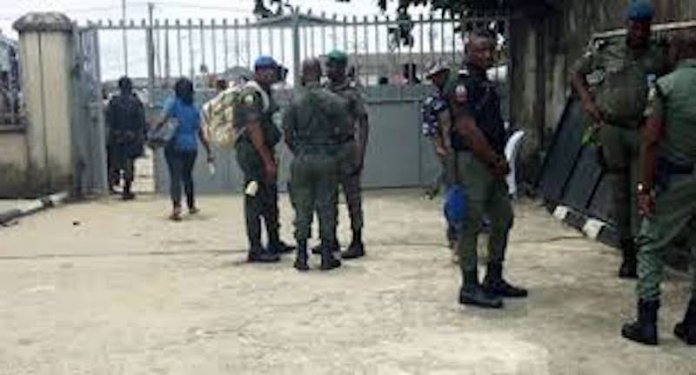 It is not completely right to claim that the Nigerian military has been apolitical, owing to the circumstances that the country found itself at independence; the military was not able to divorce itself completely from governance. Therefore, when the first civilian government was sacked through a military coup, barely six years after, it was the fulfilment of a prophecy by many. A couple of military interventions in the governance of Nigeria followed before the birth of this current democratic experiment, known as the Fourth Republic, which is 20 years on. With exception of a few states, National elections have, largely, been concluded across the country.

However, one of the gaping sore points of the recent national elections was the role of the military in the electoral process. Ordinarily, it is widely believed that the Nigerian Armed Forces have no role whatsoever in the conduct of elections in the country.

Mr. Femi Falana, a Senior Advocate of Nigeria has argued that the maintenance of internal security, including law and order during elections, were exclusive responsibilities of the Nigeria Police. Citing Section 215 of the 1999, he said it was erroneous for INEC to insist that only the military could guarantee security during elections.

“Once INEC has discharged its constitutional duty of fixing election dates, the onus is on the Police to provide security and maintain law and order,” Mr. Falana said. “Since election is not a military duty, the police force is at liberty to collaborate with other law enforcement agencies like the Nigeria Customs Service, Nigerian Civil Defence Corps, and Nigerian Prisons Service, etc.”

Mr. Falana accused former President Olusegun Obasanjo of dragging the military into the conduct of elections when he illegally deployed troops to manipulate the 2003 general elections.

However, he said the courts have consistently advised the Federal Government to desist from involving the Armed Forces in the conduct of elections.

Citing the Appeal Court ruling in Yussuf versus Obasanjo, 2005, 18 NWLR (PT956), 96, he quoted the court to have said, “It is up to the police to protect our nascent democracy and not the military, otherwise the democracy might be wittingly or unwittingly militarized. This is not what the citizenry bargained for in wrestling power from the military in 1999. Conscious step or steps should be taken to civilianize the polity to ensure the survival and sustenance of democracy.”

In another ruling in the case between Buhari and Obasanjo, 2005, 1 WRN 1 at 200, the court again held that “In spite of the non-tolerant nature and behavior of our political class in this country, we should by all means try to keep armed personnel of whatever status or nature from being part and parcel of our election process. The civilian authorities should be left to conduct and carry out fully the electoral processes at all levels.”

In upholding the judgment of the lower court, the Supreme Court in Buhari v Obasanjo, 2005, 50 WRN 1 at 313, held that the State is obligated to ensure “citizens who are sovereign can exercise their franchise freely, unmolested and undisturbed.”

Mr. Falana also cited two recent rulings by the Federal High Court and the Appeal Court that barred the government from deploying troops for election duties.

He cited the ruling on the Ekiti governorship election where the Appeal Court held that even the President of Nigeria has no powers to call on the Nigerian Armed Forces and to unleash them on peaceful citizens, who are exercising their franchise.

However, the argument for the deployment of soldiers to assist in keeping the peace during the period leading to; and on election day is that INEC does not have the numerical strength to carry out the task require of it. For the 2019 elections, INEC insured one million ad hoc staff and electoral officials who would participate in the forthcoming general elections. The chairman of INEC, Prof. Mahmoud Yakubu, said, “The sheer number of Nigerians that we require to prosecute elections means we cannot rely only on our staff. The commission has a staff strength of a little over 16,000 and on elections day, we would require the services of over a million Nigerians. We draw most of our ad hoc staff from the National Youth Service Corps, so we insured the corpers and other election duty staff and we would continue to do so.”

As the Nigerian Army personnel continue to be increasingly engaged in various internal security operations across the country, elections day duty have been added to this list. According the army authorities,“95 per cent of Nigerian Army troops were engaged in security duties during the general elections.Out of this, almost 40 per cent are in the North East.”

Twice, in the course of the current political dispensation, former military rulers were voted into office as civilian presidents. This distinction is held by President Muhammadu Buhari and former President Olusegun Obasanjo. The involvement of military personnel in the electoral process became pronounced during the tenure of Obasanjo, particularly leading to his second tenure in 2003 when he allegedly ‘captured’ the South-west states.

But stakeholders in the Nigerian polity have never stopped raising the alarm on the dangers of dragging the military into politics. The Peoples Democratic Party (PDP) spokesperson, Mr. Kola Ologbodiyan, has, at different times, cautioned the Chief of Army Staff, Lt. Gen. Tukur Buratai, to refrain from acts that will suggest the military is not apolitical. The party said President Buhari’s order for the army to participate in the electoral process is an aberration of Nigerian laws and a recipe for crisis. “Gen. Buratai is counseled to note that the loyalty of the military is to the state and that the Ppesident lacks the powers, under our laws, to deploy soldiers for the conduct of elections. “Our party urges Gen Buratai to concentrate on his very demanding assignment of protecting the territorial integrity of our nation and ending insurgency rather than dabbling into partisan politics at the risk of our national cohesion.” The PDP further counseled President Buhari and Gen. Buratai, to end their rationalizing of military option, stressing that the courts have previously ruled that soldiers are not needed to guarantee peaceful elections. “It may interest President Buhari to know that the judgment was sequel to a suit filed by the APC Leader in the House of Representatives, Femi Gbajabiamila, seeking a declaration that deployment of soldiers during elections is illegal and unconstitutional. “In case, President Buhari is not aware, as usual, the court directly held that “the Armed Forces have no role in elections” and if soldiers must vote, they must do so in their barracks. “The PDP therefore cautions President Buhari not to allow his desperation to push him to corrupt the patriotism of our military and use them against innocent Nigerians, whose only demand is for a free, fair and credible election.”

Reacting to the situation in Rivers States, the Executive Director, We the People, Ken Henshaw described it as a charade because the Nigerian Army has already taken a position by claiming that those who disrupted collation were thugs in military uniform. Henshaw, who was an observer during the elections in the state said the army decided to set up the committee following the damning indictment slammed on it by INEC for the unprofessional role its personnel played. “Nothing will come out of this because the Nigerian Army has taken a position in this matter already by claiming that thugs in military uniform disrupted the election. So, they mean thugs drove fake tanks, fake armoured personnel carriers and were armed with AK47 all over the state, yet nobody was arrested?”

His position for thorough investigation was supported by a retired director of State Security Service, Dr. Toyin Akanle who has expressed serious concern about the composition of the committee saying the army should have considered other segments of the society in the composition of the committee. He said, “They military needs to get to the root of this issue, if not, before they know it, the confidence of the people in the military would be completely eroded. This is because for the people to see people in military uniforms snatching ballot boxes and intimidating even INEC officials, it is not the best and I don’t want to believe that they are members of the armed forces, but if they are, it is very unfortunate.”

After the 2015 elections, 38 senior officers were retired for alleged election interference in the elections. In 2019, just four years after, it looks like history is about to repeat itself.

In another incident, the  PDP, in Warri North Local Government Area of Delta State has accused men of the Nigerian Army, 19 Battalion, of complicity in the governorship and Houses of Assembly elections in the state.

A chieftain of the party in Koko, Chief Attie Okorodudu, yesterday, said: “We have it on good authority that the Army is guilty of carrying out electoral fraud in parts of Delta State, precisely Warri North and Sapele councils.

“They claimed to have escorted electoral materials, but unfortunately the materials being escorted by the Army did not get to their destinations, yet results emerged from such areas.” He condemned the actions of the Army during the polls, alleging that its personnel presided over electoral fraud perpetrated in some parts of Warri North and Sapele councils.

* The courts have adjudged that maintenance of internal security, including law and order during elections, were exclusive responsibilities of the Nigeria Police

* INEC does not have the numerical strength to carry out the task require of it, the commission has about 16000 staff

*95 per cent of Nigerian Army troops were engaged in security duties during the national elections. Out of this, almost 40 per cent were in the North East

* After the 2015 elections, 38 senior officers were retired for alleged election interference in the elections