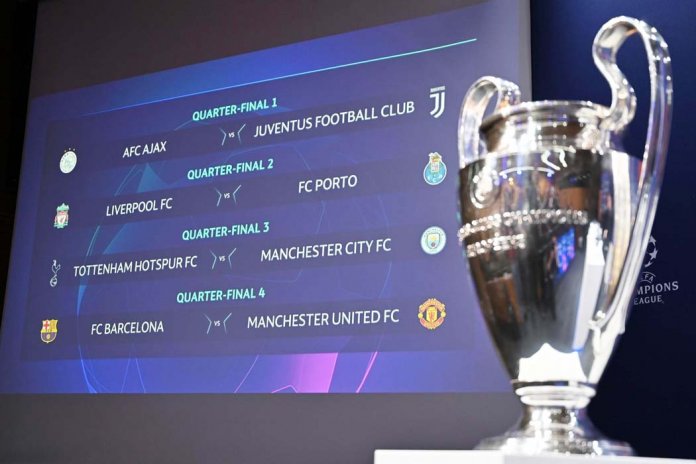 Tottenham have been drawn against Manchester City in an all-English Champions League quarter-final tie, while Manchester United will face Barcelona.

In the other two ties, last season’s finalists Liverpool were drawn against Porto, while Real Madrid’s conquerors Ajax will face Juventus in a rematch of the 1973 and 1996 finals.

The draw means a return to Nou Camp for United caretaker boss Ole Gunnar Solskjaer, who scored a stoppage-time winner in United’s Champions League final win over Bayern Munich in 1999.

Although Barcelona were initially drawn to be at home in the first leg, the tie will take place at Old Trafford to accommodate neighbours Man City.

UEFA said ahead of the draw: “Manchester City and Manchester United will not be able to play at home on the same night, nor on consecutive nights, following a decision made by the relevant local authorities.

“Therefore, should both clubs be drawn at home in the same week, the team having finished lower in the domestic league the previous season – in this case, Manchester United – will be reversed in accordance with the UEFA Club Competitions Committee principles.”

The first legs of the quarter-final ties will take place on April 9 and 10, with the second legs coming a week later on April 16 and 17.

Spurs will travel to the Etihad Stadium in the Premier League on April 20, meaning the two sides will play three times in the space of 10 or 11 days.

Liverpool’s quarter-final against Porto will be a repeat of last year’s last-16 tie which Jurgen Klopp’s side won 5-0 on aggregate.

Liverpool manager Jurgen Klopp told the club’s official website: “What can I say? It’s Porto and we’ve played there already and we know how good we had to be last year.

“I could not be further away from thinking it’s the best draw because it isn’t – it is just the draw, it’s the opponent we have to prepare for and that’s all we will be thinking about from when we start preparing for the game.”

Speaking about Manchester United’s tie with Barcelona, former Old Trafford boss David Moyes told Sky Sports News: “It’s an incredibly tough draw but a great draw. After beating Paris Saint-Germain you can take anybody on. A great occasion, the sort of games that Manchester United are used to and it will be a great night.”

The draw was also made for the semi-finals, where United would meet Liverpool, should both progress to the last four. Tottenham or Manchester City will face the winner of the quarter-final between Ajax and Juventus.