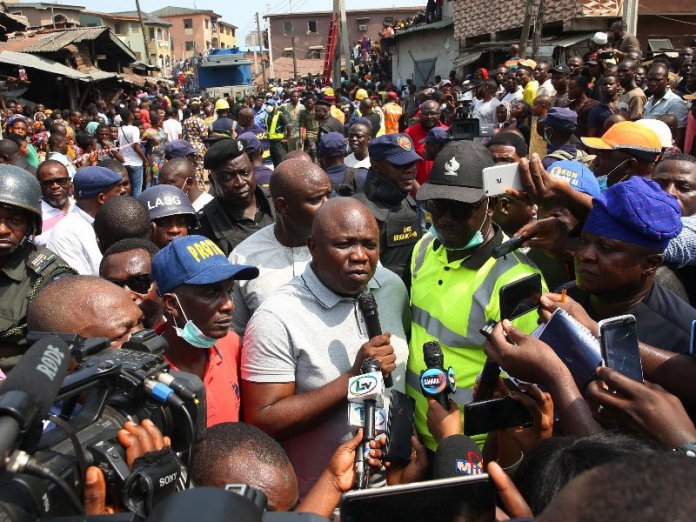 The Lagos State Government has handed all 20 bodies that were brought dead to the hospital from the site of the collapsed school building in Lagos Island to their families for burial.

The state’s Commissioner for Health, Dr. Jide Idris stated this when he visited the Lagos General Hospital yesterday, as search and rescue operations were officially called off.

Families affected by the devastating event are still in shock and some, particularly those who lost their loved ones, walk around dazed, hoping all that played out on Wednesday was a nightmare that they would gladly wake up from if only someone could nudge them.

Death brings with it cold silence and except for the heart-wrenching wail of mothers, there was nothing else to do than resign to fate, and so it was with families of those killed by the tumbling building at Ita-Faji, as they filed out to retrieve the bodies.

The Commissioner said there are 45 survivours receiving treatment in government health facilities across the city. These include the Lagos Island General Hospital, Massey Street Children’s Hospital, Onikan Health Centre and Gbagada General Hospital.

“Out of the 45 survivors known to the government as at this morning, 14, including 10 children and four adults, are still receiving medical attention at the Lagos Island General Hospital.

“More survivors will still be discharged to their families before the close of work today (yesterday).”

At the Lagos Island General Hospital, a woman was seen praying silently for the wellbeing of her child that was critically injured during the incident.

They all had dreams that they hoped would turn to reality someday but for the poor workmanship of the developer of that building and the owner of the building who allegedly ignored the evacuation order of the Lagos State Building Control Agency (LABSCA).

Officials of LABSCA stated this yesterday as they demolished some buildings that had been marked as defective. “We have over 80 cases of defective buildings in Lagos Island alone that we have approval to remove the occupants from all the buildings that have been identified as distressed so that no lives are lost in Lagos.

“We have removed over 30 in the last one year,” said Mr. Omotayo Fakolujo, the acting General Manager of LABSCA. “Scientifically, these buildings must be subjected to test through Lagos State Materials Testing and it agencies and that is how we identify them so that we sure that nobody is malicious about bringing down these structures.”

He said, “In the past three years, you can see that no structure had gone down in Lagos, because of Materials Testing that is doing its due diligence and LABSCA’s certification department is also building with them, but for these old structures we need to do foundation probing for over 70 per cent of these old structures that are over 75 years old to ensure that they are still structurally sound.”

He said their demolition action was not prompted by the collapse of the school building at Ita-Faji area of Lagos Island. “We have started with over 30 removed in the last one year. We just secured the clearance from the court because most of the prolonged marking that we are not bringing structures down in Lagos is not that we don’t have the will to do it but what we are trying to avoid is litigation from the court.

“We don’t want to be slammed with outrageous liabilities, but what we are trying to do as much as possible  is to remove all occupants from all the structures that have been distressed so that no life is lost in Lagos,” he added.

“We have cleared over 80 houses ready for removal  in Lagos island, and we are going to be doing them in phases.

“From today, we are going to remove them in a systematic way so that life will be comfortable for Lagosians,” he said.

LABSCA began the demolition exercise early yesterday at House No 60A in Freeman Street, Epetedo, Lagos Island, where a three storey building belonging to one Chief Yesuf Fagbemi Odanle was brought down.

Some of the residents were happy about it, while others complained that they were not given adequate notice as some of them still had their belongings in the buildings at the time of demolition.

Meanwhile, building professionals have advised the Lagos State government to demolish most of the buildings in the Idumota, Adeniji Adele axis of Lagos Island to prevent them from collapsing on their users.

The professionals, who represent Building Collapse Prevention Guild, at the scene of the collapsed building yesterday, said nobody needed to conduct an integrity test to know that the unfortunate incident occurred because of deflection in the beams, bad workmanship and poor quality building materials. They added that these infractions were ignored by those who ought to regulate building code, saying it would happen again in the area any time soon.

However, the claim that the infractions were ignored by government agencies was countered by the Lagos State Building Control Agency (LASBCA), through its Public Relations Officer, Titilayo Ajirotutu who told THISDAY that “during its monitoring exercise, the Agency identified the building as being distressed and was given a letter to undergo all necessary tests to ascertain the structural stability of the building.”

She said, “After this the owner during the structural reappraisal and engineering re-enforcement, the recalcitrant builder went ahead and did additional floor on the building. The agency enforced this by sealing up the building and evacuating everyone in the building but they went back there.”

Regardless, the first Vice President, Nigerian Institute of Building (NIOB), Mr. Kunle Awobodu, said the tragedy could have been avoided because the Lagos Island had been designated a danger zone for frequent collapse of buildings.

Awobodu, who is the immediate past President of Building Collapse Prevention Guild BCPG, said there was “no need to carry out structural integrity test to know that many of those buildings are weak.

He said the building that just collapsed was built by a developer who handed it over to the owner-family about 10 years ago and that it had been renovated twice.

“Merely sighting the buildings, you will see deflection, evidence of poor construction, and they are so jam-packed with infinitesimal airspace where people do not respect setbacks, and all the buildings will burn down if there was fire outbreak in one of them, and it will be difficult for fire fighters to penetrate them.”

He said the standard setbacks recognized by law is that a building should have space of three metres on the sides and six metres in front, “but in Lagos Island, you have one metre, 1.5 metres, some are so dangerously close that you will not need to take measurement.” The situation, he said was particularly pathetic because the government seems to sit idly, saying “We have government; we have Ministry of Physical Planning and Urban Development, LABSCA, among others. This is happening because of obvious evidence of cheating and non-compliance with established laws and regulations.”

He said the harrowing aspect of the tragedy was that while people mourn, some unscrupulous people are undeterred and continue with their substandard construction, even in the vicinity of the disaster.

He said perennial cries by government without lifting a finger to prosecute defaulters amounted to shedding crocodile tears. “The amount of money spent on rescue operations could be used to create a system to alert the regulators when such buildings were being developed.”

He said danger looms on Adeneji Adiele street where “most of the buildings are death-traps, danger waiting to happen; down to Sangrose, to Tinubu Square; Isale Eko area; Isanwo; especially Idumota; when you are coming from the Island to your left Idumota; Ebute Ero.”

The area where there is sanity, he said are the approaches to CMS, Broad Street, and the stretch to Obalende, recommending that the whole of Lagos Island should go through urban renewal and that families displaced by the exercise should be given new accommodations elsewhere.

BCPG Lagos Island Cell said in a statement said, “Compromise-cum-political influence is the barrier to the Building Collapse Prevention Guild ( BCPG) struggle against building collapse on the Lagos Island.

“Again, we appeal to Gov. Ambode, Oba Akiolu and Asiwaju Tinubu to support our cause against bad developers and negligent regulators. There are many buildings waiting to collapse all around us. A stitch in time saves nine.”