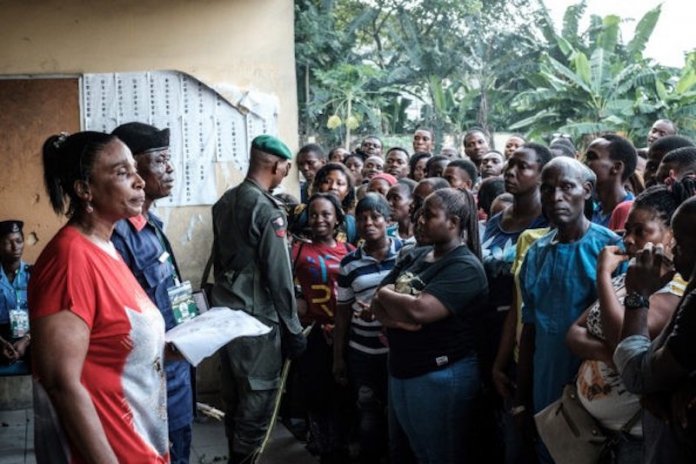 Citing intimidation, bribing of electorate and act of brigandage, four among political parties that contested the last Saturday House of Assembly in Ondo State yesterday called on the Independent National Electoral Commission (INEC) to cancel the election in Ondo East and Ondo West Local Governments Area of the state.

The call was made by candidates of Peoples Democratic Party (PDP), African Democratic Congress (ADC), African Action Congress (AAC) and the ANRP during a protest and a news conference held in Akure, the state capital.

The protesters, including a 65-year-old father of Ebenezer Adetokunbo, 26, who was declared missing since the election day, marched to the Alagbaka headquarters of INEC in Akure.

The protesters, which also included youths, traders and who were chanting unprintable words against some leaders in the community, urged the INEC to cancel the results of last Saturday election in the interest of justice.

Led by a PDP stalwart in Ondo Kingdom, Chief Segun Adegoke, and the former Majority Leader of the state House of Assembly, Hon Dayo Akinsoyinu, the protesters said the electorate was denied opportunity to choose who should represent them in the assembly.

Addressing journalists, Adegoke alleged that the plan of all the ‘ugly incidents’ that transpired on the election day was hatched to save the APC and the state governor from another defeat.

The PDP chieftain, who cited specific wards and units where thugs allegedly chased people away for not ready to compromise their positions, alleged that there were cases when money was shared to voters in queue to induce them to vote for either APC or Zenith Labour Party (ZLP).

“What happened on March 9 was a sham. It is disheartening that thugs armed with guns, knives and all sorts of dangerous weapons scared away electorate from their various units,” Adegoke said.

Speaking on their plight, the candidates of different political parties said they were ready to explore all lawful means to recover their mandate.

Specifically, the candidates said they were ready to go to the Election Petition Tribunal to protest against the injustice perpetrated against them.

Meanwhile, the father of the missing man, Mr. Rufus Adetokunbo, said his son left home to vote in Ward 9 around Ayeyemi Junction in Ondo city and never returned home.

He, however, said some pieces of information reaching him suggested that some armed men in military uniform waylaid him and whisked him away.

“I am begging INEC and Ondo State Government to help me search for my son, Ebenezer. He is an easy-going child who only went out to exercise his civic right as a responsible and patriotic Nigerian,” the man said.

Reacting to the action of the protesters, the APC in a statement by its state Publicity Secretary, Alex Kalejaye, said the allegation is not only fraudulent, baseless and unfounded, it is incongruous with the anti-corruption stance of the APC-led government.

“To the leadership of the APC, every election is an opportunity to gauge the party’s strength and popularity, therefore, we ensure vigorous but peace campaigns, stating in unambiguous terms our plans and vision for the people.

“The House of Assembly election emphasised the fact that the good people of the state still appreciate the APC as a party that cares for the genuine development of the state.

“The election in the state was largely and reasonably fair and peaceful, except in a few local government areas,” he said.