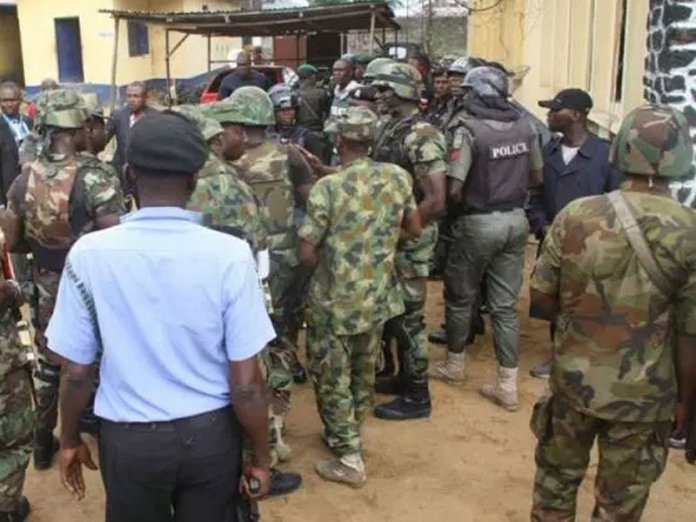 From Rivers to Adamawa, Kwara to Bayelsa, and Akwa Ibom to Delta, the deployment of heavily armed soldiers and other security operatives ahead of yesterday’s governorship and House of Assembly elections was massive. Samuel Ajayi looks at this development, which many believe was targeted against opposition states, and the ensuing voter apathy

And the Maid Runs for Cover…

The cook made a dash as she heard the footsteps of soldiers who seemed to have momentarily held her boss hostage. Her boss was no other person than the Honourable Commissioner for Education in Rivers State, Gogo Jaja. The CCTV footage, which has since gone viral in practically all social media platforms, shows the maid making for apparently the store or another exit, other occupants of the house, whose identities could not be ascertained, following suit, and coming on the heels are soldiers who are heavily armed.

In another CCTV footage, which has also gone viral on social media, at the entrance of the home of the Rivers State Commissioner for Education, it was revealed how heavily armed soldiers stormed the house and were patrolling the compound.

Some residents of Port Harcourt, the Rivers State capital, told THISDAY how their streets now looked like war zones as a result of heavily armed soldiers deployed in the state. A lawyer, Jennifer Briggs, said leaders of the All Progressives Congress (APC) in the state were on the loose.

“If you see the kind of military men here, you will think they are in Rivers State to battle Boko Haram or the so-called Fulani herdsmen,” Briggs said.

Another resident of the city, Oghenekome Isuosuo, said his area looked like a military barracks where soldiers were more than residents.

However, the Minister of Transportation, Rt. Hon. Rotimi Amaechi, said the deployment of soldiers was good for the people of the state. While receiving a delegation of the British High Commission in Nigeria at his residence in Port Harcourt, Amaechi said the voting exercise would be more secure with the soldiers, as they would help to prevent unnecessary loss of life.

“With the presence of the military in Rivers State for Saturday’s elections, everybody, including the All Progressives Congress (APC) and the Peoples Democratic Party (PDP) members are protected. They (military) will beef up security in the state,” Amaechi said.

He added that his party, APC, was not on the ballot but he would be voting for the governorship candidate of the African Action Congress (AAC), in the state.

Amaechi might be making a point. But that does not seem to explain why the same soldiers who were supposed to provide security for both members of the APC and PDP have been invading, Gestapo-like, the homes of PDP leaders in the state. And the former governor, a leading member of the ruling APC, did not explain why it was states controlled by the opposition PDP that witnessed the massive security deployment.

Rivers State Governor Nyesom Wike criticised the harassment and arrest of PDP leaders, saying it is unlawful, as security agencies are expected to be unbiased.

“We want to warn that such biased, politically-induced arrests and malicious jailing of the PDP leaders only serve to heat up the already volatile political atmosphere with heightened tension and dissension, which could cause serious problems to the peaceful conduct of the governorship and House of Assembly elections in the state,” Wike said.

In Akwa Ibom State, the story was not different. There were reports of heavy deployment of armed soldiers in the state ahead of the March 9 elections. The federal government also deployed three Commissioners of Police in the state. And they took over the security of the state. Four mobile police units, including the Special Protection Unit, were also deployed in the state. This was confirmed by the state Commissioner of Police, Sani Kaoje. Kaoje said the deployment of soldiers and policemen was not meant to intimidate voters but to maintain peace before, during and after the elections.

But despite the deployment of these heavily armed security agents, the office of the Independent National Electoral Commission (INEC) in Ibesikpo Asutan Local Government Area could not be saved from arsonists who set the place on fire on Friday night. A release signed by an INEC National Commissioner and Chairman of the commission’s Information and Voter Education Committee said the commission did not know the source of the fire and had informed security agencies.

Ibesikpo Asutan is the home local government of a former governor of the state, Obong Victor Attah.

Kwara and the Siege on Ilorin…

On Friday morning, residents of Ilorin, the Kwara State capital, awoke to find the streets taken over by heavily armed security men. They comprised officers from the Army, Navy, Nigeria Security and Civil Defence Corps (NSCDC), Immigration, National Drug Law Enforcement Agency (NDLEA), and Air Force. In fact, for the most part of Friday, military helicopters were flying all over the state capital.

Reports said fearing for their lives, residents of the ancient city stayed indoors in the early hours of the day as the streets remained deserted. It was not until about 10am that some residents summoned up the courage to come out and carry out their routine businesses. Even at that, an atmosphere of siege was palpable.

The Commissioner of Police, Kayode Egbetokun, could not give an exact number of the security agents that were deployed in the state for yesterday’s election. But he admitted that it was more than the number deployed during the presidential and National Assembly elections.

The anti-graft agency alleged it noticed an unusual withdrawal of over N 1 billion from the state government’s account on the eve of the last presidential elections. The money was reportedly withdrawn in cash of two tranches of N350 million and N720 million between February 7 and 11.

While EFCC claimed it was performing its constitutional duties, political analysts believe the arrests may not be unconnected with Saturday’s election. PDP had accused the ruling APC of targeting its leaders for arrest to prevent them from mobilising for the poll.

Okowa and the Unwanted ‘Delta Force’, Bayelsa Gets a Taste…

Governor Ifeanyi Okowa of Delta State had to contend with the forces deployed in the riverine areas of the state, including Warri South West, Burutu, Bomadi and Warri North local government areas. There were also heavy military patrols in Warri, Efurrun, Udu and Ughelli.

There was uneasy calm on the streets of Yenagoa until Friday when tension became heightened as more soldiers and heavily armed mobile policemen were deployed in the Bayelsa State capital. Yenagoa also saw the deployment of Air Force personnel and naval officers. The Commissioner of Police was redeployed and another commissioner sent to the state. As at 6am on Friday, military helicopters were flying over the state capital with many terrified residents refusing to come out of their houses.

Adamawa: Between Atiku and the President’s Wife…

The wife of President Muhammadu Buhari, Aisha Buhari, could not get her brother, Mahmud Ahmed, to be handed the APC governorship ticket, as the incumbent governor, Jibrilla Bindow, retained the ticket. It was a major fight in the state as Aisha wanted to prove she could deliver her home state, while the PDP presidential candidate, Atiku Abubakar, also tried to show he had his home state under control. And now, there was heavy deployment of security forces. Michika, a major town in the state, was under police and military siege with many residents considering either to come out and vote or stay in their homes.

The permutations in Adamawa were clear. There was a certificate forgery allegation hanging over the head of Bindow. The belief in the camp of the president’s wife is that if he is not able to wriggle out of the problem, Ahmed, Aisha’s brother, would benefit from it and pick the ticket.

A resident of the Michika, who did not want his name in print, said the interests of the president’s wife and that of Atiku were putting a lot of strain on the state, which has had its fair share of the Boko Haram menace.
Meanwhile, Air Force ISR (intelligence, surveillance and reconnaissance) platforms had been deployed in the state and many were asking if that was necessary.

PDP States seem to be the Only Volatile States…

The Coalition of United Political Parties (CUPP) condemned the deployment of the heavily armed military operatives. The group’s spokesperson, Imo Ugochinyere, said it was unfortunate that those being targeted for arrest by security operatives were PDP leaders.

“The homes of PDP leaders and serving government officials in Rivers, Akwa Ibom and Delta states are being broken into by soldiers. Massive kidnaps and abductions of party leaders and people who have roles to play in Saturday’s elections are ongoing. Election officials are being surrounded in some areas in preparation to use them to announce fake results,” Ugochinyere said.

Civil society groups, on Friday, called on the international community to prevail on Buhari to halt the militarisation of elections in the country. At the time of filing this report, elections were ongoing and it was not certain if the president would heed any advice against deploying the military for elections. Besides, there were reports of massive voter apathy, even in Lagos State, as many potential voters chose to stay indoors rather than go out to, as many of them put it, waste their time trying to exercise their civic rights. In fact, a voter put it on his Facebook platform that he refused to go out and vote because “results have been written already. Why should I go and waste my time?”

Experts say when this kind of apathy sets in, democracy is in danger. A lawyer who preferred anonymity told THISDAY that the aim of the deployment of soldiers was to intimidate voters and engender voter apathy. May be, that has been achieved.

Even if there was no voter apathy, the maid in the home of the Rivers commissioner that was invaded might not go out and vote. Reason? Fear. And when such happens, democracy loses.