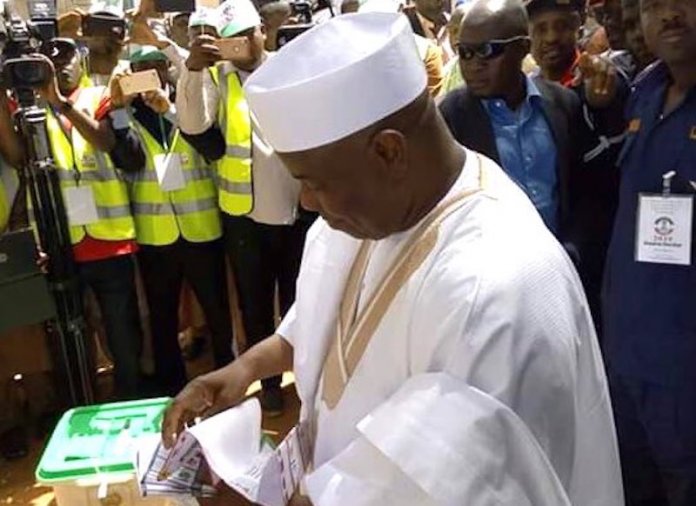 The Sokoto State Governor Aminu Tambuwal has promised to accept the outcome of the governorship and state House of Assembly elections in the state in good faith.

He said the turnout of voters in the area was impressive and voters were happy as they exercised their constitutional responsibility.

“So far, the conduct is peaceful across Sokoto State; though some challenges have been reported we are happy with the process.

“Moreover, I want to assure you that I will accept whatever is the outcome of the election in good faith,” he said.

He called on the people of the state to remain calm and be law-abiding during and after the election.

Also the gubernatorial candidate of the All Progressives Congress (APC) in the state, Alhaji Ahmed Aliyu, has expressed satisfaction with the turnout of voters in the state.

Aliyu described the turnout as overwhelming and encouraging after voting at Polling Unit 019A, Tudun Wada, Magajin Rafi.

The APC candidate commended the voters, saying: “I am impressed by the peaceful conduct of the electorate.”

He commended INEC for the good conduct of the exercise and said: “It showed that Nigeria’s electoral process is growing.”

Aliyu also said he would accept the outcome of the election and expressed optimism that he would be victorious.

Speaking to newsmen after casting his vote, the Social Democratic Party (SDP) governorship candidate, Abubakar Sadiq, also lauded the smooth conduct of the election and the turnout of voters.

He however said he received complaints from his supporters that thugs disrupted the process in some polling units.

The SDP candidate said he had reported the matter to the appropriate authorities and the issue was being resolved.

He, however, expressed hope of winning the election. (NAN)