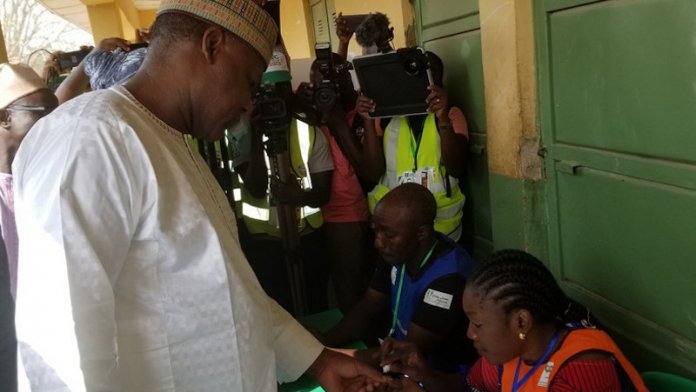 Speaker House of Representatives, Yakubu Dogara, and his wife were among voters that voted at their polling unit in Gwarangah Primary School in Bogoro local government area of the state.

The Speaker arrived his polling unit at exactly 11.38am, amidst party supporters and they were accredited without any challenge.

THISDAY reports that Gimbiya Dogara, the wife of the speaker, was first to be accredited and thereafter she cast her vote, followed by her husband who cast his vote at 11.41am.

“From the conduct of the election, I think, it is peaceful, but what I have seen here is that there is no mammoth crowd like the last election. I don’t know what happened and some of you who were here during the election saw the crowd, but I can’t see that kind of turnout here today. I don’t know what is responsible for that, may be voter apathy”

“The fear that people’s vote may not count is the reason why people did not turn up as such because we saw that in the last election, the problem was not with the voting, people came out to vote, the problem started at the collation level, especially at the ward level”

“Coalition at the polling units were almost done peacefully and conducted in a very transparent manner, but at the ward, local government and constituency level, things started changing. So, I guess part of the reason why we have voter apathy is that people think their votes don’t count and as such, what is the point voting. The problem started with the collation and we hope that things don’t repeat itself in this election,” he said.

Okagbare Emerges Second at FBK Games in The Netherlands