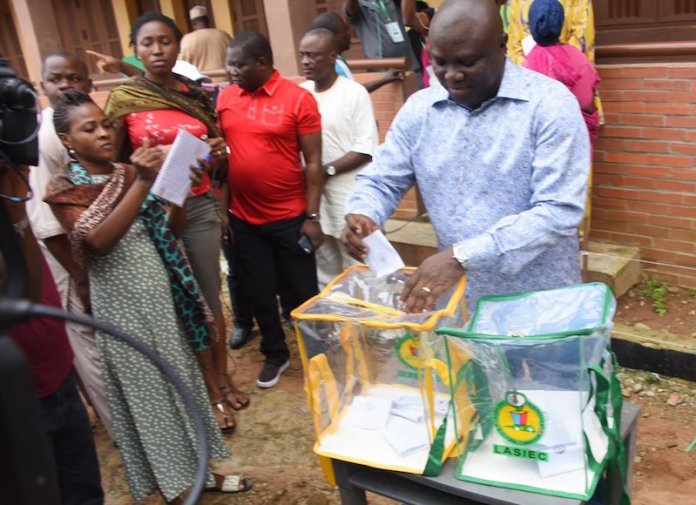 Gov. Akinwunmi Ambode of Lagos State on Saturday cast his vote in the Governorship and House of Assembly elections, urging other eligible voters to also come out and exercise their civic obligations without fear.

Ambode arrived at his Polling Unit 033, Ward A5, at Ogunmodede Junior and Senior College in Papa Epe by 9.54 am, accompanied by his wife, Bolanle.

Speaking to journalists shortly after voting, Ambode urged the electorate to believe in the process by coming out en-masse to perform their civic rights.

He said this would continue to enhance the tenets of democracy and also promote the culture of ‘one man, one vote’.

“I just want to thank all Lagosians that today, we are going to promote the real tenet of democracy by actually performing our civil obligation and coming out to vote.

“I just finished voting with the first lady, and in this particular polling booth, everything has been so peaceful and I also understand that across the state, voting is ongoing and there have been report of delays in some of these polling centres.

“We implore INEC to make sure that the voting materials, staff and ad-hoc staff come out quickly so that everybody can come out to perform that same obligation,” Ambode said.

He encouraged every eligible voter to perform their civic obligations without fear and threat, saying he was happy to have also been part of the process.

The News Agency of Nigeria (NAN) reports that the INEC officials arrived at the polling unit at 7.30 am, while voting and accreditation commenced at 8.00 am.

Meanwhile, there was high turnout at several polling units visited in Epe, Lagos State, with residents coming out to vote for candidates of their choice in the elections.

Some of the voters who spoke with the News Agency of Nigeria (NAN) expressed happiness taking part in the election process.

Mr Saheed Ahmed, one of them, attributed the high turnout of voters to the quest for good governance, which the indigenes want to experience in the next four years.

“Epe is one of the major communities that need to deliver their vote for continuity of infrastructure development witnessed in this present administration.

“Gov. Akinwunmi Ambode has performed tremendously in the area of infrastructure development in the community.

“For the community to enjoy the continuity of good governance and government presence in the division, we need to come out en masse to vote,’’ he said.

Mr Demola Olufowobi, a youth leader, said he came to his polling unit at about 10.30 a.m.

“The voting exercise went smoothly and people conducted themselves in a good manner.

“The governorship and States House of Assembly elections are more peaceful, compared to the Presidential and Senate election held two weeks ago.

“All the challenges experienced in the last election have been corrected and voting exercise went smoothly.

“It was a hitch-free voting exercise,’’ he said.

Another resident, Miss Peju Akanji, said that at about 7.40 a.m., people had already lined up at her polling unit to vote.

She said the elections were very important to people of Epe, Lagos and Nigeria at large.

“The Governorship and House of Assembly elections are the major determinants of whether the state and its people will enjoy good governance or not.

“We are out to cast our votes and the voting exercise is going on peacefully,’’ she said. (NAN).